A death in Dredd 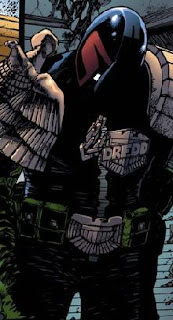 Death doesn't mean anything in comics anymore, they say. The average comic book reader is too jaded and cynical to fall for that, they say

They say that, but it's been revealed that a key character in Judge Dredd - one of the longest-running serial narratives in modern entertainment - is slowly dying. And it's someone whose story I've been following since I was six, through some incredible ups and downs, and frankly, I got pretty fucking emotional about it.

There have been some absolute brilliant Judge Dredd stories in the past couple of years, especially things like Rob Williams and Henry Flint's recent Small House epic, but Dredd is still John Wagner's story. He conveys the news of the character's fatal illness in a devastatingly offhand manner, just like it happens in real life. Especially when this character has always been thought as one of the younger Judges, certainly younger than Dredd himself, and is dying of some alien disease, instead of going out in a blaze of glory.

Dredd's world is a dangerous one - the population of Mega-City One has been periodically culled in mass death events, and even his best mates haven't been safe, ever since Giant turned his back on Orlock. But some things, and some people, have been a constant, and it's not going to be the same story without them.

You can't blame readers of something like the X-men for getting jaded and cynical about the deaths of major characters. But dead is dead in Dredd's world, with very, very few exceptions, like Mean Machine or Judge Death. And this is one time when a Judge won't be coming back from the Long Walk.
Posted by Bob Temuka at 9:48 AM

Aye, it's one of the most moving things I've ever read in a comic. I'd just add that the artist Colin MacNeil deserves a lot of credit as well. He's probably the oldest Dredd artist who's still working on the strip and it's some of the best stuff he's ever done, in perfect sympatico with the story. The facial expressions are heartbreaking and presumably it's channeling some of the creators feelings about Carlos Ezquerra's recent death. Stunningly good stuff!