All Star Avengers: Ends of an era


It doesn't take long for a superhero universe to get incredibly convoluted and complicated. When a shared universe is being created by multiple people with different styles, ideas and goals, and they are producing regular material that keeps piling up, it's no wonder that continuity can get so tangled and inconsistent.

The creators of superhero movies over the past couple of decades have learned this lesson for themselves - after 19 films the Marvel Cinematic Universe is already far too complicated for some (even if it's still pretty fucking basic), and the X-Men movies didn't even notch up half a dozen entries before they had to pull a complete reboot to clean up the sordid mess (and look like they're going to have to do it again soon).

But the universes seen and experienced in the original comic books get far, far more complex and intricate, with dozens of new stories adding to the overall saga every month, and things rapidly reaching breaking point. Things have to start over every few years, and everything has to be new again.

And sometimes, a comic series will end up standing as a definitive end of an era, even if nobody really intended it to be at the time.

All-Star Squadron didn't start out as the last word on DC's original superheroes, and began as a celebration of the entire Golden Age era when it first appeared in the very early 1980s.

Working with his talented artistic collaborators, writer Roy Thomas used the comic to tell stories of the earliest days of the DC superheroes, and delighted in piecing together all the inconsistencies and contradictions of Golden Age tales into something that actually made sense. The relief that Thomas felt at finally getting everything to match up, years and years after he first started to worry about the mismatches, can be seen on every page on All-Star Squadron.

It all got a bit tedious at some points, with Thomas sometimes going to great pains to fix something that literally nobody else in the world gave a damn about, but the comic was also a heartfelt appreciation of the first great super-heroes, and suggested they still had plenty to say, decades after the world war that spawned most of them had ended. 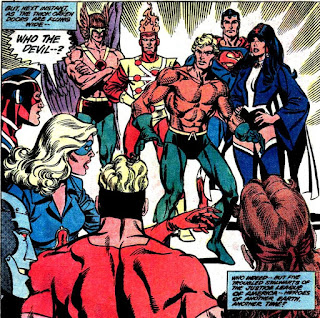 And it all worked well for a while - the first two years of the title are some tight comics, with Jerry Ordway's incredibly shiny art and the original superheroes barrelling from one adventure to the other, and even getting a glimpse of their heritage in the shape of the newly introduced Infinity Inc.

But then came Crisis on Infinite Earths, and all the worlds were smashed into one, and all that history had to be rewritten to fit the new status quo. A lot of DC's titles were left high and dry by this cosmic change, and reading All-Star Squadron now, it's easy to see the heart being ripped out of the book. None of it really seemed to matter as much anymore. 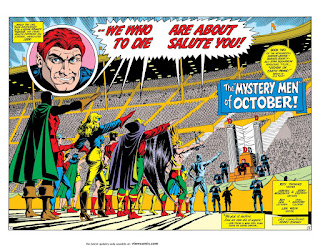 And All-Star Squadron really does now feel like the end of an era. The massive change from Crisis, which saw the big guns like Superman and Wonder Woman wiped from WW2 stories, happen mid-issue, with a photo of the heroes changing between panels as the timeline reasserts itself. The comic carried on for a year or so afterwards and skewed straight into the Young All-Stars sequel series, but the era when it was really important to figure out how the Golden Age stories slotted together was over.

It's a little bittersweet, and sometimes straight-up sad - there is a moment where the Freedom Fighters travel between worlds and it's meant to be triumphant, but it's more depressing when you realise they're heading off to decades of death and defeat. And then the clear narrative that has been going on ever since Superman hefted that first car over his head is over.

Even though those characters have reappareared over and over again in the years since - and for the past few years those original heroes have been reimagined in several Elseworlds-type reboot - All-Star Squadron really did feel like the end of the DC multiverse, far more than the actual Crisis comic managed. 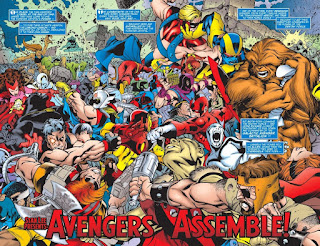 Across the publishing divide, Marvel hasn't felt the incessant need to constantly reboot its universe like its distinguished competition - the Fantastic Four who are still appearing in their own comic are ostensibly the same people who stole a rocket ship to beat the Commies in 1961.

But the company has also had plenty of soft reboots, and there are definite periods where the whole line is moving in a particular direction, and the publisher has its own examples of stories that feel like an ending of that era.

One of them came along a decade or so after All Star Squadron wrapped up, and like that earlier comic, Avengers Forever is a celebration of the tiniest trivia of a superhero universe, while also putting a solid full stop on the period it is honoring. 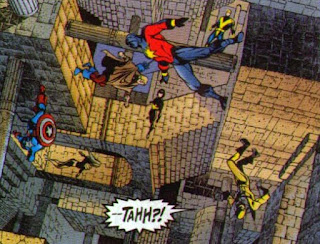 Avengers Forever is a cracking classic-era Avengers story from the late 1990s, with Kurt Busiek and Carlos Pacheco building up their tale on the previous 30 years of stories with remarkable clarity, and producing a slam-bang action saga that spreads across all of time and space, and finds room for the most esoteric characters with a connection to the world's mightiest team.

But like All Star Squadron, it's also one of the last of its kind. Not long after Busiek moved on from Avengers Mansion, Brian Bendis moved in, and started on some major renovations of the entire Avengers concept.

Since then, there hasn't been that kind of deep dive into Avengers lore that you see in this series, not without things getting ironic to the point of parody. There are still some comics that deal with this kind of  Marvel superhero trivia, but they are rarely played straight as Busiek and Pacheco's efforts.

And most crucially, any new stories that take this road are not seen as 'important' as Avengers Forever was, and while the team has become massive movie box office stars, this 20-year-old comic feels just as much as a capstone as All Star Squadron did. Plenty of Avengers comics before this one did similar things, but very few did the same afterwards, and this is where it all ends. 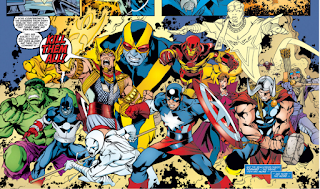 There is certainly some melancholy in reading these comics now, knowing that things would never be the same again. Comics, like life, goes on, and sometimes it's so easy to miss these eras once they're passed.

But putting a capstone on a particular era isn't a bad thing, even if it wasn't always intended that way. It's nice to have one last crazy adventure, one last run of stories, one last appearance of these characters at their best. Especially when the comics themselves are as much fun, and so delightfully dorky as All-Star Squadron and Avengers Forever.
Posted by Bob Temuka at 7:27 PM