I know my bat-shit


Somebody asked me, just the other day, whether I liked the movie Batman best, or the comic Batman. I said it was complicated.

I said that I had put a lot of thought into this type of thing, because while I don't know shit about a lot of stuff, I know my bat-shit, so I told them that while the movie versions of Batman have been an array of interesting interpretations that delight and frustrate, from the Saturday morning serial thrills to the popdayglo delights of Adam West's caped crusader, through the Burton gothic and into late nineties brash shouting from Schumacher and Nolan's new century style, up to the current glory of the Batfleck, who is a monstrously good Batman right up to the point he resorts to murder, the number of movie interpretations of the character pale into tiny significance next to the many and varied interpretations of the concept that are seen in the comics – after all, DC have been continually publishing his adventures for damn near 80 years now, every month without fail, with generations of new Bat-creators coming and going, refining and expanding and extrapolating the idea, and that's why you get all the mental alien shit in the fifties, and the bare-chested playboy adventuring of the seventies, and the whole very, very serious Bat that kicked off in the eighties, 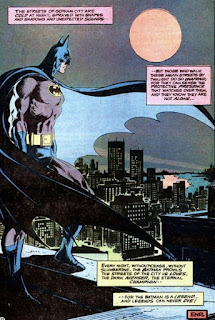 (and if you're reading a recent Batman comic by Grant Morrison, you're getting all that glorious mess mixed up at once), and so the real questions becomes what is the best version of the comic Batman to hold up against his movie counterpart, and that's more a matter of personal taste than anything else - combined with a healthy dose of timing - because I'm a child of the 1970s and 1980s, which means the only real Batman is Jim Aparo Batman, especially when he has Bob don't-give-a-fuck Haney on the scripts and went deep on the deductions, while calling everyone 'chum', and because Aparo gave the Bat-books he worked on a bright, clean and sharp look, and he drew the sexiest eyebrows in comic books, and he drew so many goddamn issues over so many goddamned years that you can be reading Batman comics for 35 years and you're still stumbling across a new Aparo story that you never knew existed before, tucked away in some Bat-family bullshit, and Aparo is still the king, because while geniuses like Neal Adams and Nick Cardy set the standard for the new and modern look of DC, it was the warhorses like Aparo and Irv Novick who really set the look for a new and modern Batman, and that whole era, with the Wayne Towers and its bizarre tree, is just one aspect of the Bat-history to get into, and it's just as easy to swear that Gene Colan, Alfredo Alcala and Don Newton are the definitive Bat-crew, even though they were doing adventures of the Dark Knight at the same time as Aparo, 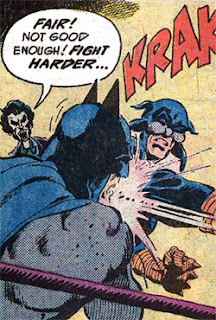 and then you extrapolate that out over decades and decades and decades, and at least three whole new generations of creators and readers, and you have people like Bill Finger and Doug Moench and Steve Englehart and Jerry Robinson and Kelly Jones and Carmine Infantino and Norm Breyfogle and Dick Sprang and, yes, Bob Kane bringing something new to the bat – and that's not even counting the one-off masterpieces where it's certainly arguable that Batman is truly defined, with creators like Moore, Bolland, Pope, Miller, Mazzucchelli and dozens of others, and then you have things like Legends of the Dark Knight, which redefined and reconstructed the character every five goddamn issuses – and now you have the new post-millenial mind and body bending, with a bright, sharp veneer, that Scott Snyder and Greg Capullo have done with the character in the past couple of years, and you end up with a mad and huge history, with all sorts of interpretations, and while they all stick to the same template, with the batcave and Robin and Alfred and Jim Gordon Ace The Bat-Hound and all that, you can get any kind of Batman, and so sometimes he's a Batman who tosses villains in a cell with a smirk and a quip, and sometimes he's a Batman who is a dark avenger of the night, and sometimes he's a Batman with a science-fiction cupboard, and sometimes he's a Batman who is a strictly street level dude, and sometimes he's a Batman who threw it away for a porcelain monkey, and there is room for them all, with a basic core concept that is rock solid and still ultra-malleable, so we can have any kind of Batman we want, and any we could need in the future, and shit, I still don't know why the Batman of the future, as envisioned by Warren Ellis in his Planetary crossover hasn't shown up again yet, because that felt like a bright and new variation on the basic Bat-theme, with a compassionate, but still firm, Bruce Wayne looking for new solutions to old problems, and the failure of anybody to take this any further is one of the great mysteries of pop 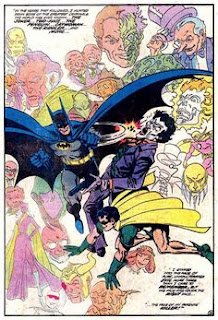 culture, and one of the things I just don't understand, and it feels like every time I watch Star Wars again, and I wonder why C-3PO is blathering on about there being no escape for the princess this time, and then says he doesn't recognise her when she shows up in a funky blue holo later, and I can't tell if the droid is lying, or if I'm missing something, and it's still bugging the shit out of me, and I could probably just google that shit or something, but who can be arsed, and this doesn't have anything to do with Batman at all, so really, when it comes down to it, between movie Batman and comic Batman, it's comics all the way, and that doesn't even address the fact that the two mediums feed off each other, with the most recent movie version almost totally story-boarded by the Dark Knight Returns, while there hasn't been anything as cinematic in any comic ever as the moment in DKR where Batman comes powering down the street on that big fucking horse, so yeah. It's complicated.

When I was finished explaining all this, I couldn't tell if the person who had asked me the original question was alive or dead, but they were definitely unresponsive.
Posted by Bob Temuka at 4:45 PM

Every superhero comics reader has two favorite superheroes: one they chose, and Batman.

Gotta go along with Aparo, some of my favourite Bat comics are drawn by him. Batman and the Outsiders - classic!
Matt B