Heat: The action is the juice


Is the gun battle that rips apart the entire world of Michael Mann’s Heat the best action sequence ever captured on film?

Michael Mann knows how to do action, and has proven this over and over again. The strident momentum of his old-school warriors in The Last of The Mohicans, the thudding fisticuffs of the big fights in Ali and the beautiful nonsense of the compromised climax to Miami Vice are all smart, awe-inspiring and thrilling scenes that any other film maker would proudly claim as a career highlight.

Even in the collaborative world of film-making, he is a true auteur -  his films always have this meticulous dedication to detail, paying off with huge and absurdly thrilling moments.

But even with all this brilliance, the absolute high point of Mann’s thrill-making comes two-thirds of the way through his truly epic crime saga Heat, when a highly-planned armed robbery suddenly turns into carnage on the streets, and 20 years on, it’s still as hard-hitting as ever.

The entire sequence has weight, with realistic outcomes and proper consequences. The whole film is leading to this point and, crucially, sticks around for all the tragic aftermath. All of Los Angeles – the great city which, with the extensive location work, is silently the real character of the movie – is visibly traumatised  by the outbreak of extreme violence in its streets, and everyone is left wandering stunned and shattered by the events.

It’s violence as theme, and with purpose. It’s a horribly necessary part of this kind of story, the one where it all goes wrong, and nothing can be the same again. And even with all that, it still manages to be an intensely exciting and thrilling scene. As terrible as it is to see peoples’ lives destroyed by the beast within, it’s still pulse pounding stuff.

After all, Mann is one of the consummate craftsmen of modern cinema, and when he nails down the action, he uses the ultra-cinematic tools of sound and editing to hammer it onto the screen.

While film is a largely visual medium, the shootout in Heat is nothing without the sound-work, and it starts with the music. Initially, it’s a sinister throb with a steady, ticking pulse as the robbery is carried out, and then cuts out completely when the shit goes down. The initial burst of action is all soundtracked by the sound of high powered gunfire echoing off massive buildings, the absence of the music barely noted.

And that gunfire is so loud, and so shocking, it's a hard, guttural punctuation point on the film. Some films are needlessly loud, but in a Michael Mann film, you should be wincing when shotgun blasts are going off next to your head, because there are consequences behind it. The echo of the exchanges mean there isn't a quiet moment, with no time to breathe, or think about those consequences.

And then the music fades in again as one of the key characters takes a crucial hit, and the adrenaline rush of the scene begins to peak. It slowly builds up again, right up until the last shot is fired, and is barely noticeable, while building to the point where the moment when Pacino looks down his sights at his final target is literally breathtaking. 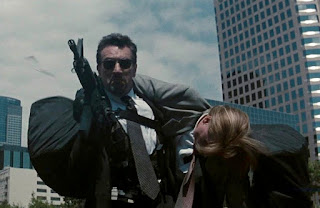 And it's a masterclass in editing as well, with several dozen tiny moments and small cuts giving the scene life. Look at the split second where it all kicks off – Val Kilmer is heading towards the car with a big shit-eating grin on his face, which suddenly disappears, there is a tiny cut to his point of view and the glimpse of armed cops, and when it comes back to him, and he’s already bringing up his own automatic rifle and is blazing away.

It’s that beat, in which the character registers the danger and instantly acts, that makes it so fast, while so easy to follow. He's acting on instinct, and the viewer isn't left wondering what is going on, or why he is reacting this way. It's all so clear, and you're already being carried away on that ocean of noise.

And it's right through the whole scene, immersing the viewer right in the middle of a stunningly dangerous gun battle, but keeping all of the action clear, and out in the open, with no need to rush these things.

There is also a notable lack of slow motion in the whole scene, a rarity in most action scenes these days - just one tiny moment of DeNiro lifting up his rifle at the precise moment when he knows it's all really gone to hell. That says it all - there isn't any need to show off.

After all, like all Mann films, it’s about professional, self-aware characters, and there is no need to slow down the action when they're constantly moving forward. None of them - cops or robbers -  stop moving during the battle, they keep surging forward, trying to escape, or trying to capture.

The battle rages across several blocks of vast, wide streets and the film finds characterisation in the actions people make in the heat of the moment, rather than anything they ever have to say. Everything you need to know about Vincent Hanna is in the way he doesn't stop charging after his prey, and everything you need to know about Neil McAuley is in the way he blasts away at him, without caring about who is in the background.

And so when the bullets do find their marks, on both sides, it's tragic. Characters who are actual people, who we only saw joking and laughing with their friends a half hour ago, are struck down and killed instantly, with no mistaking of their fate, and showing those consequences of the event again. 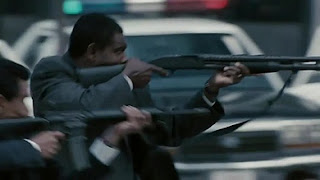 It's this professionalism, this dedication to the reality of the moment, that ultimately makes the scene. Heat was born out of the stone-cold driven capers of things like Richard Stark's Parker books, but are also given a dose of reality.

Mann got the stories that form the basis of Heat, and this scene, from real cons, who spent lifetimes taking down real scores, and that dedication to their real lives that makes it. These aren't children playing silly games. These are people who are not going to stop, until somebody else stops them, and that's the way it inevitably goes.

And this scene, this wonderful, loud, energetic,exciting scene,  is just one part of this sprawling masterpiece. Heat is one of the great films of the 1990s, with coffee shop confrontations from two of the late 20th century's greatest actors, a willingness to address hard truths about a life around the law, some absolutely stunning cinematography and Tom Sizemore saying things like 'The action is the juice".

But the firefight on the streets of LA is still the crowning achievement of this film, and is still so good in 2016.It's just as thrilling, and just as well-made as it ever was, In this age of CGI-augmented bullshit, it's real, and truly gritty, and undoubtedly the best action scene ever captured on film.
Posted by Bob Temuka at 10:43 PM