This will spoil the hell out of Sandman: Overture, by Neil Gaiman and JH Williams III 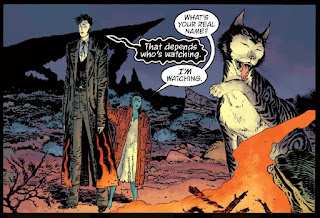 This was always a large part of Sandman's charm, along with Death's cheery disposition, Todd Klein's maniacally perfect lettering and Morpheus' ever-groovy haircut. Neil Gaiman's Sandman comics have never made any secret of what they are, and often used those meta-textual expectations to subvert the deepest-set traditions of the comic medium, while always appearing faintly surprised that it was allowed to get away with it.

So when the latest Sandman comic comes to an end with the usual meta-shenanigans, it's not much of a surprise. What is a surprise is how much Gaiman takes a torch to that charming and cosy sense of storytelling, and burns the whole thing down with glee.

There is still an energy to Gaiman's Sandman comics, even though it's been 20 years since the series finished. You can still see how intoxicated Gaiman became when he realised he could tell a story about anything he felt like in the pages of Sandman, with a small army of terrific artists - including Bachalo, Zulli, Jones, Thompson, Talbot and many, many others – only too eager to bring those dreams to life.

It found a loyal, if overly goth, audience, and was many peoples' introduction to Gaiman's tone of measured humanity getting mixed up in crazed fantasy. It's not a comic for everybody – it could be awfully earnest, blatantly sentimental and far too clever for its own good – and some of the monthly comics now look a little dated and naive.

But it was still a comic that valued the dreams and desires of transsexuals in modern New York as much as those of Emperors of Ancient Rome. It was a series full of experimentation with comics form, while nailed down in classical storytelling techniques that were immortal. 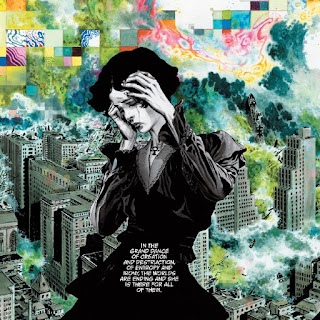 Sandman came to a very definite end with #75 in 1995, ending the a story of an omnipotent personification of the Universe's ability to dream, and his very bad decisions. It ended with some Shakespeare and a glass of wine, but it never really went away.

While he embarked on a stellar career as a full-time novelist, Gaiman would often find the time to tell some new story of the Endless, popping up in some Vertigo anthology here and there, with some eight-page story. They were charming enough, and more than a little predictable, because they were all about how you should always, always be careful what you wish for.

There was a whole book of Endless stories, with beautiful art from Barron Storey, Frank Quitely and others, but this was more of the same. Any ideas about a 20th anniversary series came and went, with Gaiman under other obligations - it literally wasn't worth his time to spend any of it writing a comic book.

And then all the deals were suddenly done, and over the past year and a half, Sandman Overture has been coming out semi-regularly, offering a story of what happened to Morpheus, in the time leading up to his imprisonment in an English cellar at the start of the monthly series, all those years ago. 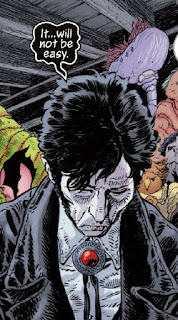 It did take a long time to come out, with laughably optimistic promises of a bi-monthly schedule quietly swept under the carpet. But it did reach its conclusion recently with the release of the sixth issue, (with decades of high-priced reprints and collections to come).

It's the art that first grabs the attention, with Gaiman giving JH Williams III all sorts of other-wordly tableaux to draw, and the artist gleefully responding, with a bewildering amount of different styles. He gets to do his version of Jack Kirby's bombast and Charles Vess' ultra-delicate line, sometimes in the same panel.

If there is even a panel to cram them into - with the opportunity to craft a literal dream world, Williams III smashes, dissolves and melts the barriers between individual panels, or crafts them out of background elements. It can be hard to follow, but any worthwhile comic takes a bit of effort, and this is beautiful enough to try. 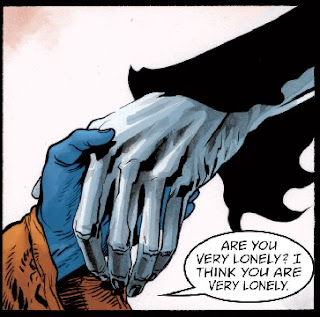 Gaiman's story is a typical take of the end -and rebirth - of the universe, all carried off with his customary whimsical touch, that gives it all a feel of the intentionally anti-climactic. Gaiman's apocalypses might have death tolls in the trillions, but always end up centred on a couple of characters standing around talking, and Sandman:Overture is no exception.

It has been full of tasty little easter eggs for fans of the original series, unlocking a few minor mysteries that had been left hanging around for years, checking in on old favourite characters and featuring specific call-backs to favourite chapters of the Sandman story, (especially the one about the cats).

And there are important and fundamental additions to the entire Sandman mythos, just thrown in there for the hell of it. After all, it's not like anybody was desperate to meet the Endless' parents, but you still got him to visit them both, and there was even less need for them to be the poetic coupling of Time and Night, but it's just the sort of glorious literalness that Sandman was always so proud of. 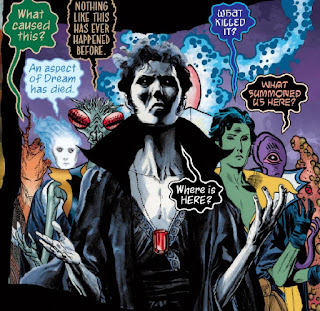 But Sandman Overture isn't quite as safe and cosy as it looks. Intriguingly, it also ended with one of Gaiman's most nihilistic statements about the power of stories. It ends with everybody noting how pointless the whole thing has been, because it will be a story that nobody remembers, and doesn't really matter.

While it sheds new light on the infinitely complex relationship between Dream and Desire – she/he will bring about his destruction, but they might actually understand each other better than any of the other Endless – Sandman: Overture ends with everybody forgetting that it ever happened.

And it's not like it matters, because this is a fictional story, and it's not like it's real or anything. This story is already a part of Sandman, but it's also an anti-story, lurking around near the starting point of this strange saga. 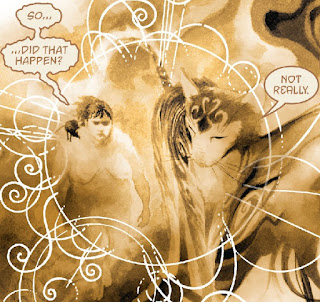 It's all a bit of a joke really, and you can hear Gaiman chuckling away if you hold your ear to the page, because of course he thinks stories matter, and even the silliest comic book has something to say, even if nobody in the actual story learns everything. But it does give the story a bit of extra bite, a sharp edge in all the cosiness of a celebratory story.

There will be undoubtedly be more stories of the Endless, with Gaiman unable to stay away from that metaphysical pantheon for too long, but this Overture has come to a jarring and unsettling end, just as unsettling, and just as funny, as all the best dreams ever were.
Posted by Bob Temuka at 6:46 PM

Thank you for a great overview of what the series accomplishes, and also what it offers. You are mistaken, however, when you write, "Any ideas about a 20th anniversary series came and went, with Gaiman under other obligations - it literally wasn't worth his time to spend any of it writing a comic book." Gaiman offered Overture to DC at that time, but he was determined that they make it worth his while... which they didn't. He was disappointed, because he wanted to mark the 20th anniversary with a new story, but he wasn't about to budge in the face of their lowballing. It's been related in interviews and especially "Prince of Stories: The Many Worlds of Neil Gaiman" by Wagner, Golden, and Bissette. Needless to say, DC finally came around.