Of all the wild and wonderful things you can do with the comic book form, essay comics are some of the most rewarding, and far too rare for their own good.

Although they are based around factual events, essay comics are not just non-fiction. They come loaded with a point of view, and there is inevitably some kind of artistic license in the re-telling of these events, some kind of perspective.

But while you can get a hundred different superhero comics every week, and plenty of tie-ins to toys and TV shows that you were really into decades ago, there are few decent essay comics coming out regularly, which makes them a little more precious.

Because there are some terrific ones out there, like these five. 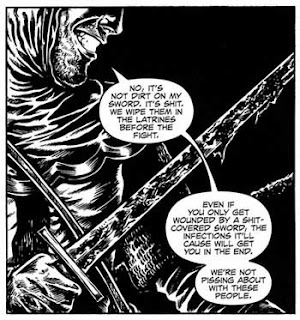 Historical essay comics are particularly interesting, because history is full of crazy shit that blows our modern minds. The late, great Jack Jackson did some wonderful comics about the history of Texas and Native Americans, and Maus brought a nakedly personal aspect to the mind-bendingly horrific story of the holocaust.

One of the best is Crecy – a short one-off comic by Warren Ellis and Raulo Caceres, published by Avatar in 2007- which is a story of a pivotal battle in medieval Europe, one of those battles that changes everything for centuries. The comic form is used to easily explain the details of this complicated conflict, and it's always clear exactly what is going on.

But the thing that makes Crecy so essential is the fact that it makes no apologies for the appalling events it depicts. While our 21st century minds are rightly repelled all by the slaughter, the story is told from the perspective of an English foot soldier who is only too happy to put the boot into some noble French arseholes.

It's almost the prequel for every other comic featuring a cynical British character Ellis has ever done, with the same angry working-class attitude and righteous indignation, willing to literally knife some aristocratic bastard in the eye. Crecy gives you the facts, but it also gives you the swagger, and Ellis could produce a 27,000-volume on English history from this level of dirt and filth, and it would never get old. 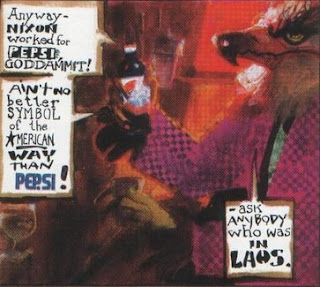 Brought To Light: Shadowplay
By Alan Moore and Bill Sienkiewicz

A sideways history of America's vile involvement in shadowy international affairs, Brought To Light is a great rant of a political comic, with real anger in Alan Moore's script.  He lets a chummy and bloated symbol of American's intelligence agencies spill a few dark secrets, and makes no secret of how awful it all is.

This is not the American Dream, it's the nightmare, and with these much mad symbolism, you couldn't ask for a better artist than Bill Sienkiewicz, who heightens the truth with his obscure splashes of blurred colour and sharp edges and splatters of blood/ink. The vicious and brutal overthrowing of a democratic government never looked so good. 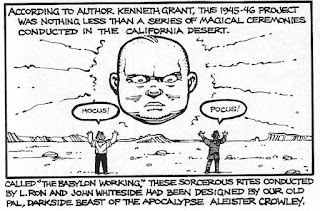 The Big Books Of...
By tonnes of talented writers and artists

The brilliant and much-missed Big Books, put out by DC's Paradox Press in the 1990s, have been lauded on this blog before, but they are also brilliant examples of the mini-essay,  with hundreds of tiny stories across the 17 books.

They show just how much information you can get across in just a few pages. Few of the Big Book anecdotes are longer than four pages, and some of them get in and out with a story of bizarre history in just a page or two.

With dozens of comics finest artists of the times getting their hands on this weird little stories, the Big Books are just as entertaining as they are informative - and sometimes just batshit crazy. And each Book has its own personality, with the uber-paranoia of the Conspiracy and Unexplained books contrasting hard against the straight horror of the Martyrs and Death books. They're still indispensable comics – hit and run history that leaves the reader gagging for more. 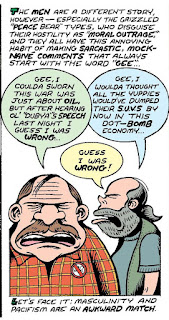 Everybody Is Stupid Except For Me
By Peter Bagge

Another great rant of a comic book, with Peter Bagge's cartoons for Reason and other specialist publications all collected in the same place, into a book that is bursting with truths from the margins of modern society.

Bagge's comics are a look at modern culture in all its ugliness, and the artist never hides how appalled he is by it all, or how embarrassed he is by his own inability to come up with any actual answers to the questions he keeps running into.

And there is some anger there, at stupid wastefulness and institutional bullying. Bagge often keeps it pleasingly down to earth, often having a go at something he sees in the world around him, but there is universal despair in his venting, and he often has equal bile for all sides of the political spectrum – even if you disagree with him, he makes a passionate argument.

And it's a Bagge comic, so it's also hilarious, with the usual bendy-kneed explosions of human outrageousness, and some of the stories with marginal people living marginal lives are gruesomely funny, and it all adds up to a vision of modern society that is slightly troubling. Luckily, it's still reassuring to see artists like Bagge are out there, holding up a comic mirror to it all. 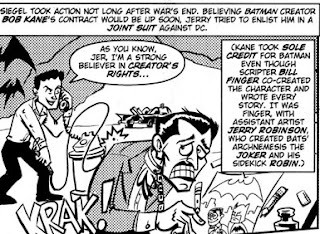 By the time they'd turned their attention to the history of comic books, Van Lente and Dunlavey had already had a major crack at essay comics with their jam-packed Action Philosopher comics, but they could be overloading, and sometimes a bit text and idea-heavy.

But their take on the history of comic books themselves has just the right mix of info and action, with cartoonish exaggeration and a totally biased focus on certain sections in the world of comics.

Even if you know all the stories already, and have read anything going about the Seduction Of The Innocent days, or the insane behind-the-scenes shenanigans of the 1990s, there is real delight in seeing the stories collected together, especially when they are told with such energy. 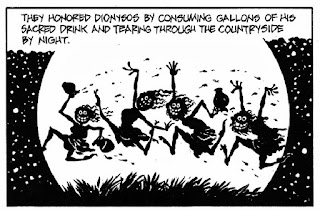 There are plenty of other great essay comics, and the definition is vague enough to incorporate all sorts of comics – it's arguable that Larry Gonick's History of the Universe books combine to form the single greatest historical essay ever, and Eddie Campbell's adaptations of Alan Moore's Snakes & Ladders and Birth Caul performances get both intensely metaphysical and deeply personal with their re-tellings of historical facts.

We could always use some more, though. This whole world really is wild at heart and weird on top, and much weirder than anything fiction can throw at us. It's good to see these stories of fact and fortune remembered and chronicled, and if you can get some laughs and some pretty art out of the deal, all the better.
Posted by Bob Temuka at 5:00 PM