Deadpool wants to kick your ass

It's not hard to see the appeal of Marvel's Deadpool character. He is a ruthless killer with an unfailing sunny disposition, constantly racking jokes as we wades through blood and guts. He has the usual tragic back-story, but that doesn't stop him getting up to hi-jinks, right up to the cosmic level. And he has a sweet red and black costume.

Deadpool has been around for more than two decades now, and has starred in hundreds of issues of his own comics, and he will be getting a big old blockbuster to call his own in the new year. He is undoubtedly one of Marvel's most popular characters.

But it's still pretty frickin' surprising exactly how popular he is, because sometimes, he appears to be the most popular Marvel hero of all, without any actual classic stories to back that up. 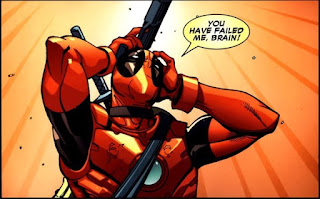 I certainly understand the popularity of Deadpool, because I saw it right from the start – almost.

We all sneer at Rob Liefeld now, but his appearance on the pages of New Mutants at the very end of the 1980s was tremendously exciting at the time. I'd been reading the New Mutants regularly for the past three or four years, and it had felt like a comic was really flailing around for a direction for the past 18 months. And then Liefeld exploded on the scene with his ridiculous anatomy and   frenzied, clumsy cross-hatching and a vast reservoir of enthusiastic ideas.

Most of those ideas didn't go anywhere, and it would all end in tears and X-Force, but I loved the new taste of Liefeld's modern line, and eagerly bought each new issue. But thanks to the ridiculously spotty distribution of comics to the arse end of the world, I missed the issue that introduced Deadpool, and only caught up with him on his second appearance.

But along with other new things like Cable and those cute stripes on the New Mutants' pants, Deadpool was a perfect part of this new direction. Something a bit more pointed and vicious for the tough 1990s, and he instantly became a favourite character. It did mean I still never got to read his first appearance for years, because his first appearance suddenly cost fucking heaps, and I could never afford that. 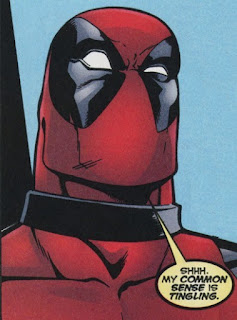 Liefeld soon pissed off to help ruin the ideal of creative ownership with Image, but he left Deadpool behind, and Marvel was only too happy to take advantage of that fact.

After appearing on various X-books, he was given his own miniseries and his own series, and then that carried on for years, and at times, there have been three or four regular monthly Deadpool titles running at the same time. Any Deadpool fan had plenty of selection, and Marvel fed that unexpected appetite with everything they could. 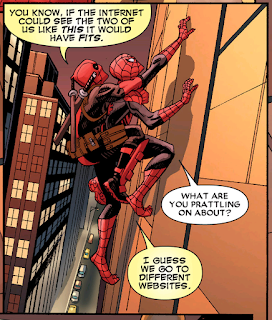 With this sort of production, it was inevitable that some of these comics were actually pretty damn good – Joe Kelly kicked off a long run of strong comics in the mid-nineties, and there has been sporadic outbursts of quality with a broad range of creators having a crack at the character.

But as meaty as these stories could get, there was never anything that was an indisputably great Deadpool comic. While Batman and Spider-Man and all the great comic characters had their artistic high points, Deadpool just didn't have that classic touch, and if you asked five hardcore Deadpool fans for their favourite single story, you might get five different answers 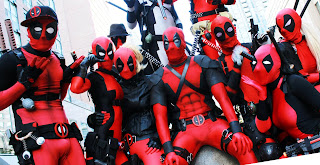 But while there are times when you wonder how Deadpool could support five or six regular titles at once, it's not just all pushing by the corporate Marvel machine. There is a grateful audience, and I see it at comic shops and conventions all the time.

Deadpool has become one of those characters that people who aren't actually total comic enthusiasts latch onto. That wicked sense of humour is far more appealing to the general public than the usual po-faced posing of the regular superheroes, and I've met heaps of people who want to read Deadpool comics, and only Deadpool comics.

I've had friends who never touch comics, but get hooked on the broad and bawdy humour of things like Millar/Morrison/Parkhouse's Big Dave or Ennis' Dicks, and I know people who love only Deadpool comics, and occasionally reveal surprising libraries of his comics. 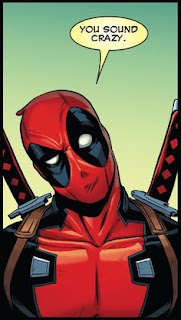 We've seen this all before. DC's Lobo has a similar appeal to people who don't give a flying fuck about the Green Lantern Corps, at least before they recently prettied him up, although his anarchic star burned out so incredibly fast..

Even Marvel has gone through this whole thing before, with a particular hero catching on with the kids. You can date it all the way back to Spider-Man, whose role as the undisputed favourite single character in the Marvel Universe lasted for a few decades before Wolverine came along.

It's notable that after two decades, Deadpool is now at the stage Wolverine was in the 1990s, when his popularity reached a peak, only to be watered down with a succession of dull comic and unnecessary cameos. There have been the odd terrific Wolverine comic in the past 20 years, but the shine came off that adamantium skeleton sometime in the late nineties.

It's certainly arguable that there are even more popular characters these days than Deadpool – and I really think Ms Marvel is the best shot for the nest character to really seize hold of pop culture – but if the 12-year-old kids who run around the local comic shops are right, they're all about the Wade Wilson right now. And 12-year-old kids are always right about superhero comics. 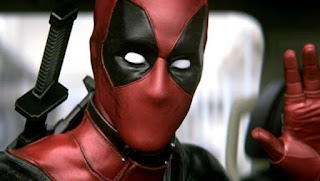 So his new movie is a couple of months away and when it comes out again, it could give the character enough of a push to stay at the top of the game for another decade, or it could stink up the whole thing, or it might do both at once.

One thing that is clear - as clear as the horrific scars on Deadpool's face - is that he is not going anywhere for a while yet.
Posted by Bob Temuka at 4:37 PM