Kid Eternity is still stalking me


I've got thousands of comics, and regularly get rid of huge chunks of them - selling them online for peanuts, or giving them away to people who'll appreciate them more than me. Huge amounts of average and mediocre comics are going out the door all the time.

But sometimes they come back. I'm not even always sure how it happens, but sometimes I still have comics I could have sworn I'd got rid of (like the Chaykin/Garcia Lopez Twilight comics from the 1990s), and other times I just end up getting them again for free from somewhere.

And sometimes it just keeps happening, and I can only assume that I'm stalking by these fucking things, and one in particular. I'm being stalked by Kid Eternity. 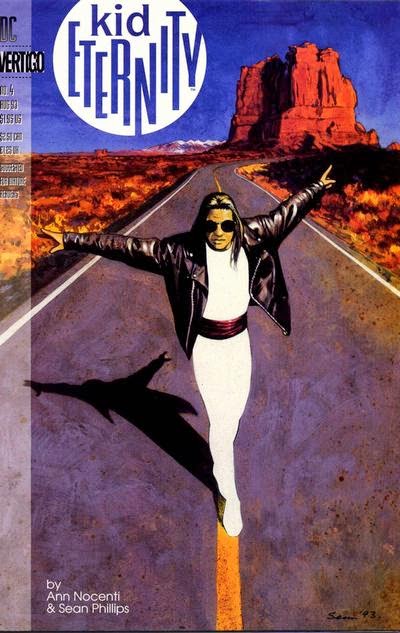 Kid Eternity is a golden age character, created by Otto Binder and Sheldon Moldoff, and published by Quality comics. He was a weird little shit right form the start, a dead kid who could raise the damned at will to help him out in his adventures. He was eventually bought by DC and later added to the world of Captain Marvel, as more of an obligation than anything else.

And when all the hip young things of comics in the late eighties were plundering DC's back catalogue for strange characters to do strange things with, Kid Eternity ended up in that group, along with characters like Black Orchid and Animal Man.  Grant Morrison and Duncan Fegredo did a deliberately obtuse, challenging and darkly funny take on the character for a three issue mini-series, that left the door open for the Kid's further wacky adventures of chaos and madness.

Ann Nocenti and Sean Phillips, a rock solid creative team, took on that challenge when Vertigo launched in the early nineties, and took the story on an existential road-trip through America and into the dark realities at the edges of life and death. It lasted 16 issues. 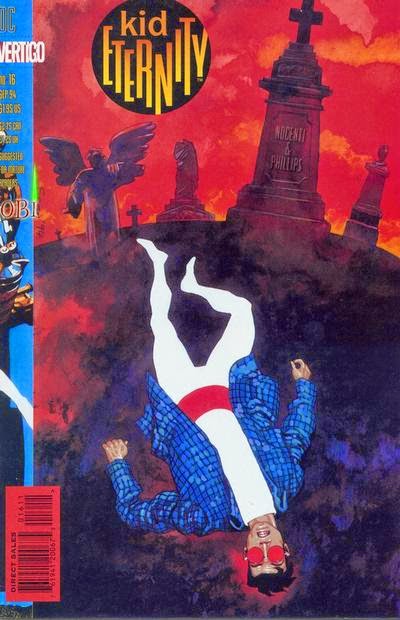 I was a Vertigo freak from the start. But I was also behind the times. The first time I heard the name Kid Eternity, they were a young student band down in Dunedin, mainly famous for prodigious drinking efforts and home-made movies that were absolute shithouse.

I missed the Morrison/Fegredo comic, only tracking the issues down years later, long after the ongoing had gone on no more. My first exposure to the Nocenti/Phillips was some random issue, six months in, and I only ever got them after that as back issues. It wasn't my favourite comic, or even my favourite Vertigo comic, but I would still buy them when I saw them, when they filtered down to the arse end of the world. 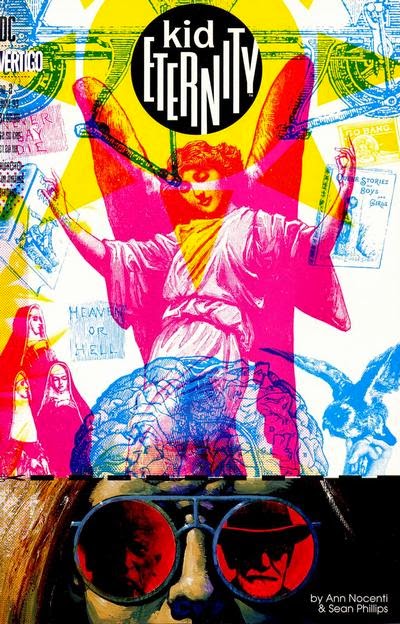 Because it was a fairly decent comic, with Phillips allowed to go crazy with his art – his work with Ed Brubaker in the past few years is just part of his style and ability – and a stream of consciousness flow from Noceniti that was so fucking refreshing after years of X-exposition.

There were the usual drawbacks from this kind of approach – events weren't really tethered to anything real when you blur the line between reality and fantasy and life and death like that. It was also just a bit too arch, even for the nineties, and, crucially, it wasn't doing anything that Shade The Changing Man wasn't already doing so well.

But there was also that constant flow of ideas and thoughts, and Phillips' lively art powering the story forward, always onward. It wasn't the best Vertigo comic, but it was a bloody good read. 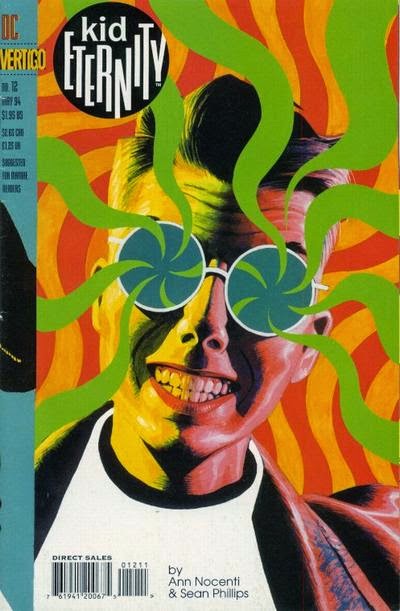 The initial crush on Vertigo faded, like they all do. While I still deeply love the imprint's best series – they'll only take my Preachers and Invisibles out of my cold, dead hands - there were a lot of deeply mediocre books, including the ongoing Black Orchid and The Books of Magic, a tonne of dodgy mini series that are largely forgotten, and past-their-prime efforts like Doom Patrol.

I got rid of them all. I still harbour some small guilt that I might have accidentally once given some Ted McKeever comics to a kids' hospital, but one way or another, they all went.

Kid Eternity was one of the last to get rid of, but I did it anyway. I never managed to find every issue, and I didn't really make any effort to do so. And half of them had already disappeared when I lent them to a mate who lent them to someone else and they were gone forever. The four or five issues I had left weren't worth holding onto them, and they were gone. 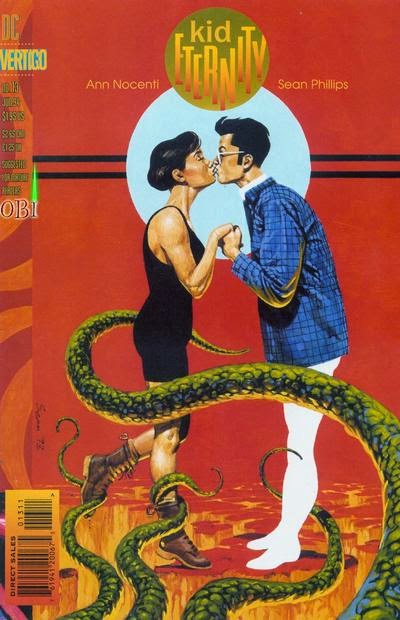 And then I ended up with some of the issues again. It only happened a couple of years ago, shortly after wishing they'd do a decent reprint, and I'm not really sure how, but I had more than half a dozen issues of Kid Eternity again.

I might have missed them when cleaning out the collection, or maybe I picked them up in a bulk lot, but whatever happened, I had them again. They were still maddeningly incomplete, so I got rid of them again without much thought. 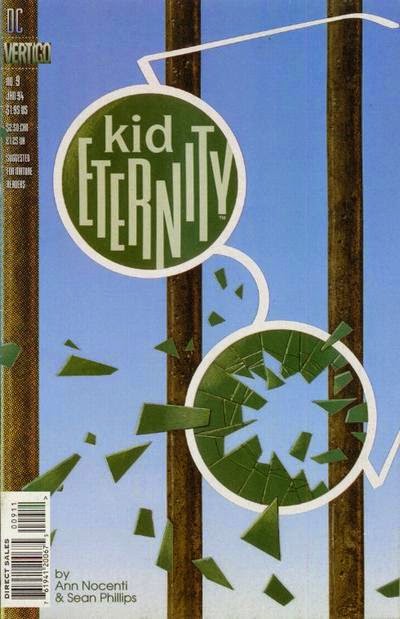 And then somebody at work the other week gave me a bunch of comics they'd had sitting around home for years, lying on boxes, unread and unloved. They included some terrible Marvel comics from the nineties, including more Nova comics than anybody will ever need.

And fuck me, there's the Kid again.

I'm starting to wonder if these are the same old issues, coming around and around. I'd never read some of them before, but others were awfully familiar - I even somehow ended up with three copies of the one with Neal Cassady in it. 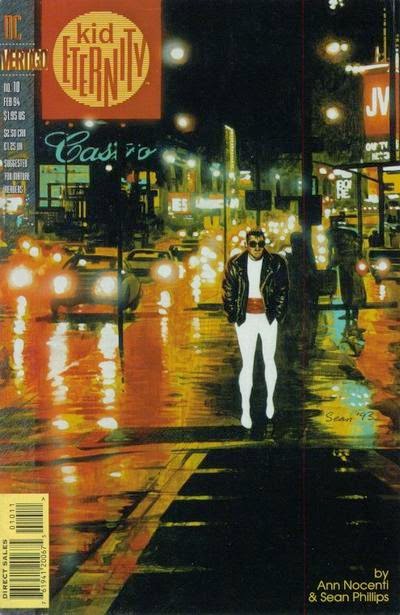 It could be worse. I could be stalked by Youngblood or Haywire. And maybe I shouldn't bother getting rid of them again, because they'll just come back again. Boomerang comics.

Most of the comics I get rid of are easy to dispose of, and never seen them again. Others keep coming back, and Kid Eternity is definitely on of them.

One of the dudes from that student band is still out there - on my radio and in my paper and part of my cricket commentary - and these comic won't go away. Why fight it?
Posted by Bob Temuka at 7:13 PM

Great post. If Kid Eternity were better known, 'Kid Eternity is stalking me' would be a great internet meme. But sadly ... he isn't.

I wish I still had my Kid Eternity comics. I lost them in a catastrophic cross country move. I've been looking for them for years without much luck. But damn was it an odd series.