It's so easy to get lost in the cosmic scales of time and space, to feel tiny in the grand schemes of the universe. It can be a personal thing, feeling lost in the infinite, but it's also a greater societal concern – everything, everyone and everywhere we all know and love has only existed for a blink of an eye in the cosmic calender, and will fade away, just as quickly.

It's not necessarily a bad thing to consider how puny you are in the face of existence. It's good for the ego, and if you contemplate it long enough, you might feel that connection to the rest of this reality, and to the life that is the foundation of everything there is in this world. That's always nice.

So you can seek those feelings by walking outside on a cloudless night, and looking up at the stars and seeing how far forever actually goes on for. And you can also dredge it up by reading the latest Prophet comic book, because that's some fucking heavy shit. 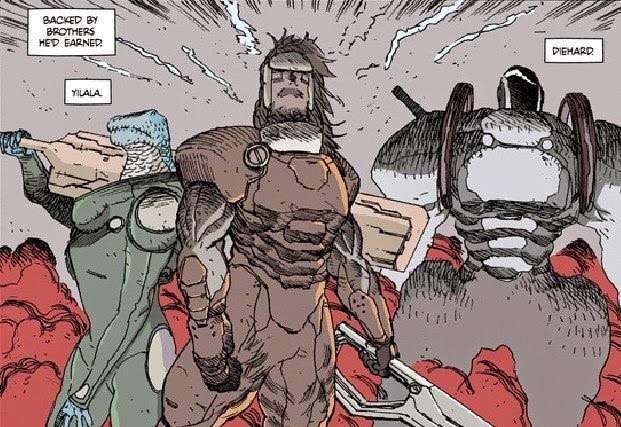 Prophet - the Image comic primarily written by Brandon Graham and drawn by a number of extremely talented collaborators – is set a mere 10,000 years in the future, but that's more than enough to create a strange and deliberately unrecognisable world. Almost all of humanity as we know it is gone, transcended or evolved into something unsettling and beautifully unknown, and our modern civilisation has vanished beneath the dirt.

It's not always the easiest comic to read – there are few easy reference points, and the story spins around the galaxy between a huge cast, the only recognisable human figures all have the same face and some characters are indistinguishable from the technology and landscape that surrounds them.

But it's a comic that is more than worth the effort, because it's an emotionally warm, uncompromisingly complex story full of action and grand schemes. There aren't any real humans left, but there are still people. 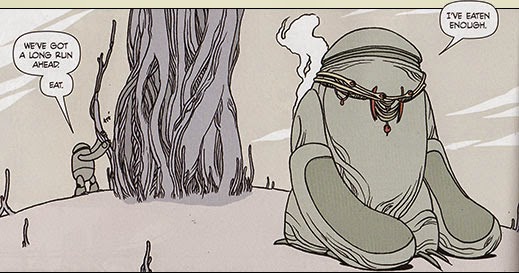 Once the reader gets past the innate complexity of the story, this sense of the unfamiliar can be just as intimidating. The characters who populate the book often don't conform to any biology or physics that we could recognise, and even the food they eat is weirdly disquieting.

This is not the clean and comfortable future of the Legion of Super-Heroes, or even the DC One Million future. The planet Earth itself is still there, just like it has been for millions and millions of years, but it's covered in an alien landscape, and everything we would recognise is long gone. In just 10,000 years, we've been wiped away.

There are still characters from the present day, all grown into something new and monstrous. Small trolls become vast, tentacled things that rage across the vacuum of space, and men of stone become bound to the structure of the universe.

This is not any world we know, and the zeal of the comic's creators in pushing the story and art into the unknown is truly admirable.

But even in this strange new world so far away from us, there are emotional depths to be found. There is the melancholy of the immortal cyborg Die-Hard, who left his humanity behind millenia ago, but still fights the good fight because that's all he knows how to do, and there is the warmth of the Old Man Prophet, who builds true bands of brothers, bonding with other freed slaves, no matter what the race, inspiring other freemen to new heights.

Creatures that are more tree or robot still know the warmth of comradeship. Even the cruel and physically repulsive Earth 'mothers' have lives full of beauty on as level we can not see, having conversations we can not hear at a cosmic level.

The funniest part is that there are unexpected depths from call backs to the some of the worst comics ever created - there is a certain visceral thrill in seeing what happened to Radar the Supreme Dog or big old Badrock. One flashback to a moment long lost in time is tempered in cosmic irony in showing just how far things have come, but is also hilarious, worth it just for the 'rib bib' gag. 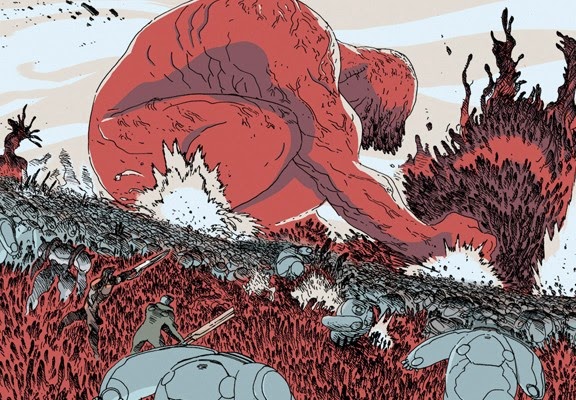 Besides, they might be strange creatures that don't always have things like eyes and hands and heads, but they still speak of honour and revenge and freedom and love - universal constants in unrecognisable tongues.

And once you realise a little of how this strange new world works, the tale that Prophet is telling is actually a relatively simple story of a huge and cruel empire rising up again, and forcing free people to stand up and fight them, while a powerful and truly ancient force of unimaginable power thunders closer to the narrative. This isn't that complicated, and adequately explained. It isn't as tough as it looks. 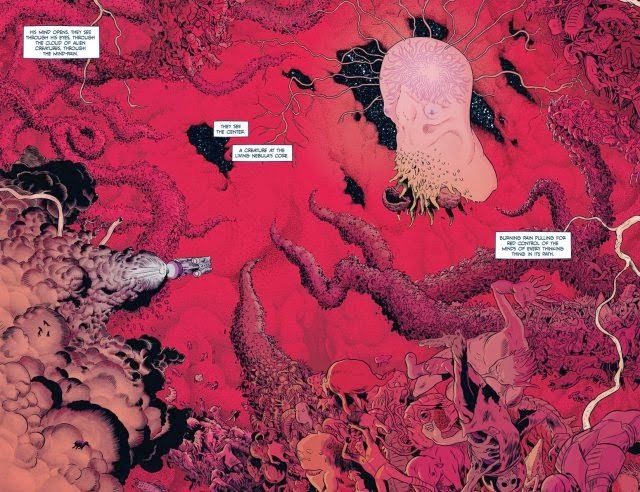 After all, at least there are still humanoids and events are still basically happening on a man-sized scale. Things could be worse - at one point, in one of the Prophet: Strikefile comics, the story even goes back billions of years, to times when there are things we wouldn't even recognise as intelligent life, and they travel through space by knowledgeable means.

There are still constants, including lusts for power and transcendence that exist in all of time and space,  but this are truly alien worlds.

And the artistic freedom that gives allows for some stunning imagery in the Prophet comics. You can do anything with the possible sights and illogical physics of this far future and even more distant past, and that can lead to some awesome art moments – gloriously strange landscapes, and epic space battles that take over entire solar systems. 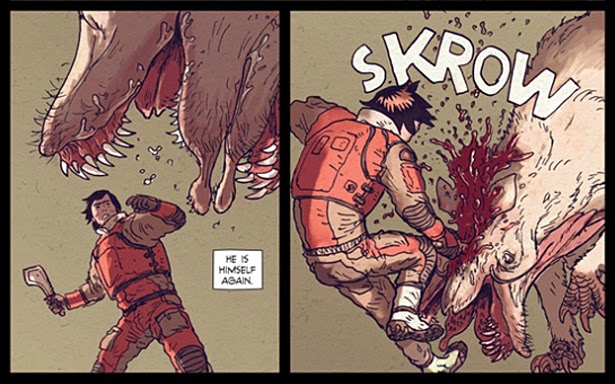 It is also nice to have a comic book that doesn't make it easy for the reader, and gives them enough credit to figure things out for themselves. When so many modern stories are dumbed all the way down to the lowest common denominator, it is genuinely refreshing to have a comic that requires a bit of effort.

There aren't any quick and easy explanations for what is actually happening in the story – it take several collected books before some of the basic tenants of this new world are explained, and the confidence of the creative team in this regard is truly amazing. But it's a comic that is truly worth that extra effort, for this much strangeness.

And if it gives you the existential shits, well, that's just a bonus.
Posted by Bob Temuka at 4:43 PM