A week of comic

But even though there has barely been a day since 1979 when I haven't read some form of comic, I’ve never really properly catalogued an entire week’s input. Never really took note of exactly how much comic books I produced in a random week. Until now. 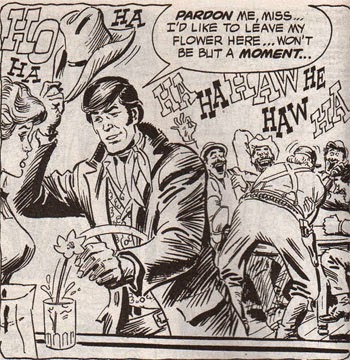 Finish off the Showcase Presents: Bat Lash book with the lovely Nick Cardy art in the morning, and kick off a lazy Saturday afternoon with the fourth and fifth Criminal books, sparked by the recent special one-shot that just came out.

Criminal is the kind of comic where I can remember all the broad strokes of the story, but the details always slip out of my head. So they're always a pleasure to read every now and then, because in Criminal, the devil is all in the details.

Today I also finally finished working my way through a small pile of Judge Dredd Megazines that I got from a local second-hand bookstore, because they're too damn expensive brand new. They took a while because a lot of the text pieces were actually worth reading this time. Makes all the difference.

Sunday is a work day, so there is less time to sit around and read. There is still room for some random All-Star Superman comics, partly because Jupiter's Legacy recently wrapped up, and partly because they were lying around and tempting me with their saucy covers and naked sentimentality. And now Quitely is my god again.

I also finish off a bunch of Comic Journal interviews with the classic EC artists, which is almost comics. 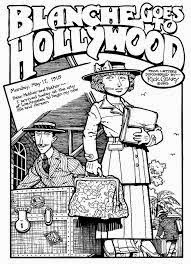 Almost all of the books I read this week are comics I already own, or have just bought, but the library is still the best place to load up on new comics that might, or might not be, worthy.

I burn through some borrowed books today – Rick Geary's The Adventures of Blanche is enormously entertaining, although after years of his awesome true crime comics, I kept expecting someone to lunge out from behind the curtains with an ice-pick; Superman/Wonder Woman volume one, which might be the least romantic comic I've ever read, with the power couple showing all the chemistry of hard stone, (although there is a great bit where they insert a back-up strip from the monthly comic into the middle of the story, so it looks like Superman runs away from a full-on battle with General Zod to go have a moan about what they're saying about him online, which is just fantastic); and the latest Manhattan Projects book, which is fine, even if Hickman's humour never really hits the mark for me.

I also get through Pascal Girard's charming Bigfoot comic in about 10 minutes, and end up speed-reading through the second volume of China Mieville's Dial H, because the plot was getting too far ahead of the characterisation, and there was no real humanity under the weirdness, which is crucial. (And Chris Weston should totally have done the art for it.)

Finish off the last of the library books, including the latest tremendously exciting adventure for Lobster Johnson and the fourth volume of Rick Remender's Captain America stuff, which I got totally lost reading. Remender's superhero comics are often complex and clever, stretching across multiple titles he's written, which might be why I just can't get into them.

I also realised I somehow missed a Criminal book, so I tear through that. There is always a bit more Criminal than I think.

And after a recent re-read of all the Multiversity comics, I got back to the latest one, with the Nazi Superman on Earth-X. It's interesting that they’ve turned the Freedom Fighters into genuine terrorists, who slaughter hundreds of thousands of people to make a point, but still take the moral high ground, because they’re hitting back at those dirty Nazis. Uncle Sam's tough talk at the climax comes soaked in death. 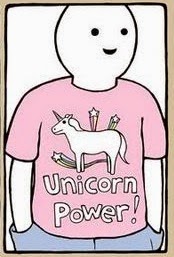 The only comic I read today was some Perry Bible Fellowship strips. The rest of the time I read magazines about movie stars.

I also read some prose books, all week long, while indulging in as much comic as possible, but they're not worth talking about. They don't have any pretty pictures.

This Thursday is a big Thursday, because it's the day the new 100-page 2000ad year-ender issue, packed full of thrill power, is out. Highlights of this year's package is Greg Staples shiny art on the new Judge Death comic, a typically nasty little Jaegir comic with a decent little twist, and new Low Life, which makes no sense yet, but will in greater context.

I also get through the first six issues of Warren Ellis and Tula Lotay's Supreme: Blue Rose, reading them all in one go for the first time, in preparation for the forthcoming final issue. It's actually way more straightforward than it looks at first glance, but there are still depths in Ellis' labyrinthine plot, and even more in Lotay's layered art.

I also read some Milk and Cheese comics, only this time I did it before dinner, which was a spectacularly bad idea, because I got so very, very hangry. 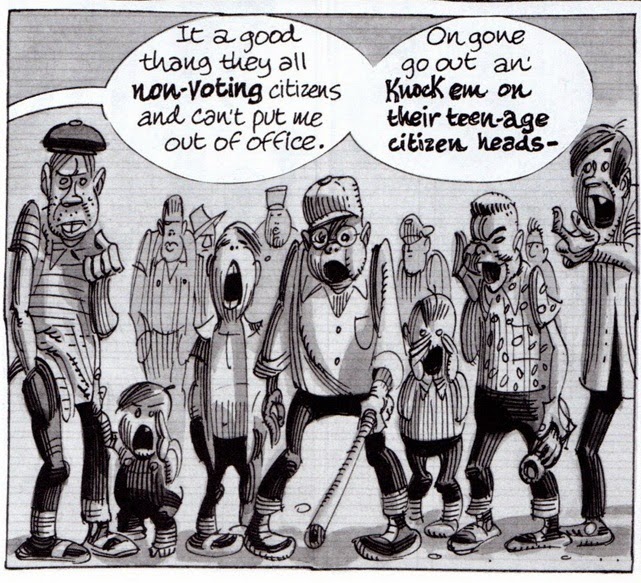 Friday is comic shop day, and there is new Hellboy & the BPRD, The Nameless and Daredevil. All good enough, but nothing great yet, and it's a bit disappointing that that last issue of that Supreme comic never showed up.

And then it's a quiet Friday night watching Archer and Justified with the lovely wife, but I still spend the evening drifting through the books on the new shelves she bought me. Browsing through greatness, a little Harvey Kurtzman's Jungle Book here, some Big Book Of The Weird Wild West there, and some Signal To Noise in between.

So many choices. So many possibilities. So little time to get to it all, so you just have to get as much as you can.
Posted by Bob Temuka at 11:56 PM