His name was Wally West. He was the Flash.

The current success of The Flash TV show shows there is a lot of juice in the whole Fastest Man Alive concept, even after all these years. I think it’s genuinely nice to see the character still strike a chord, because The Flash has always been one of the most thoughtful and dynamic superheroes, ever since Jay Garrick slapped a tin pan on his head and took to his heels.

In the comics, Barry Allen is back as The Flash after several decades as a lost hero, fallen in some noble battle, and thanks to things like the TV programme, he’s still probably the character most people would consider to be the definitive Flash. 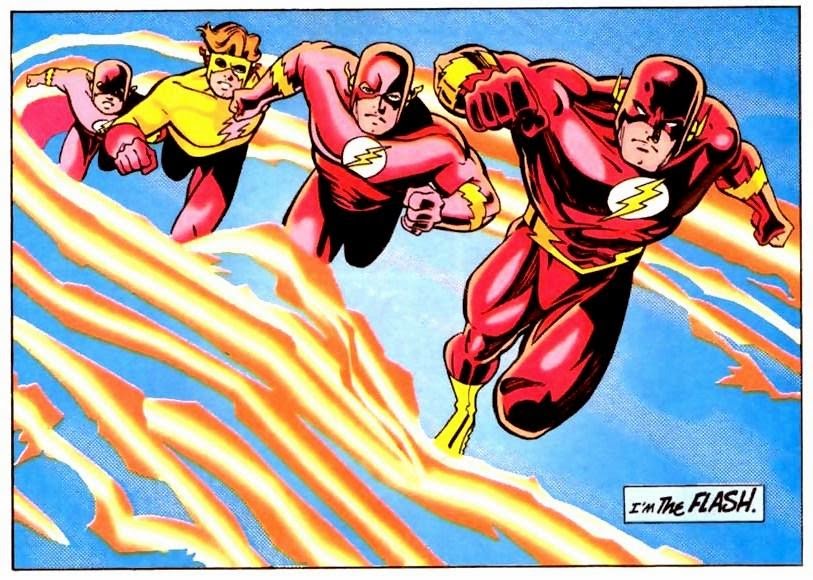 After the apocalyptic Crisis On Infinite Earths turned Barry Allen into a skeleton jiving through time, it was Kid Flash’s time, and he graduated to his own series as the scarlet speedster in the late eighties.

Despite some solid, entertaining stories by Mike Baron and William Messner-Loebs, the series never really kicked into high gear, but that all changed when Waid came along, and gave the whole comic a blast of powerful enthusiasm that made it one of DC’s most interesting titles of the nineties.

Suddenly, Wally West was almost as excited about being a super hero as Waid obviously was to be writing them. Wally loved saving people and out-smarting villains and doing the right thing. His best friends and mentors were all superfolk, and he was a true legacy character who went through an unexpected and unprecedented period of growth as a character. And Waid’s enthusiasm for writing that story was just as infectious.

It’s so easy to take this comic for granted, because Waid’s fantastic Flash run in the 1990s has been copied and cloned so many times, but it really was an absolute breath of fresh air at the time it was published. The influence of Miller’s Dark Knight Returns – then less than a decade old - on mainstream superhero titles was almost total and the entire genre was trapped in a state of gritted teeth and anguish.

And then here comes Wally West at light-speed, and he’s actually enjoying the role of The Flash, and speeding around Central City with a smile on his face. It’s not all sunshine and lollipops - he faces plenty of horrific villainy and unavoidable sacrifice and terrible carnage - but he doesn’t spend all his spare time brooding and moping about. He just saves who he can, and since he can move faster than light, he can save just about everybody.

And he was a character who used his powers in new and imaginative ways to stop the bad guys. He didn’t just blast them into oblivion with over-sized guns, he took them down using inventive and ingenious methods.

Wally didn't need high-caliber weapons, not when he had Flash Facts. 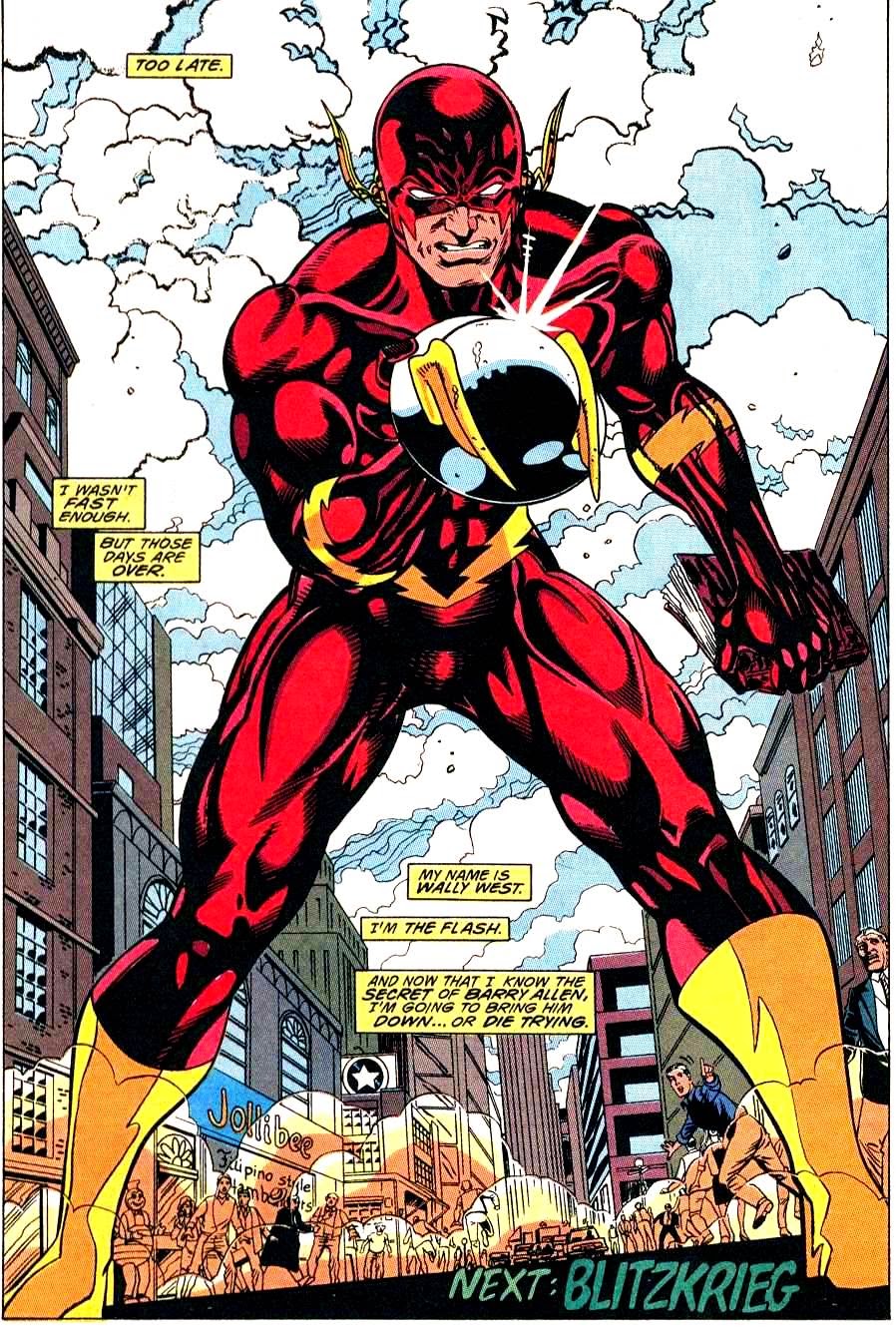 The major influence of Wally West on other superheroes at the time was the fact that he was DC’s first truly successful legacy character for decades, using the speed of his adventures to move the story past the inertia of the status quo.

Waid wrote Wally’s adventures as a superhero - including battles against the usual Rogues and journeys to the far side of time and space - for most of the nineties, but he also wrote Wally's adventures as a young man finding his place in the world. For the first few years of his own title, Wally was, simply put, a bit of a shit, and he remained a bit of a shit for Waid’s first few issues

But then he actually started to grow as a character. He became more aware of his responsibilities, both as a superhero and as a regular person, and his personal life became far richer and easier to relate to. It was a slow, organic process that essentially took Waid’s entire run to play out, but it was a pleasure to follow,

Especially when we are unlikely to see that kind of growth again in a monthly superhero comic - if the universe doesn’t reboot first, the odds of a writer staying on one title for long enough to make those kind of incremental changes are tiny, (although Waid is making a fair go at it for the moment with his consistently strong Daredevil stories, which have now racked up dozens of issues). 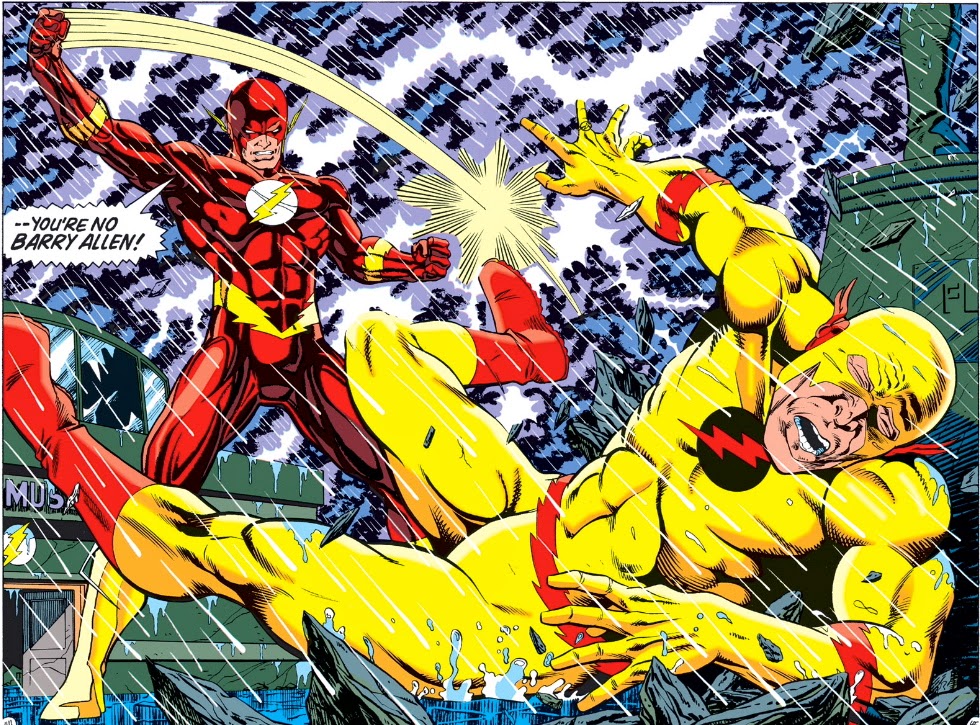 Wally faced his own legacy very early on in Waid's run, when he had to deal with the sudden and unexpected return of Barry Allen, and was ready to step down in favour of his returned mentor. It turned out to be the Reverse Flash of course, and Wally found his self worth by totally beating Barry's greatest foe.

From that moment on - as Wally liked to tell us every single issue in poetic repetition - he was The Flash. He became a crucial member of the Justice League, and never looked back over his shoulder, incorporating Barry's legacy into his own, and moving it on.

DC took note over the nineties, and tried to push a lot of their other characters in similar directions, with Green Lantern and Green Arrow giving way to the new generation, and even Superman, Batman and Wonder Woman were all replaced. 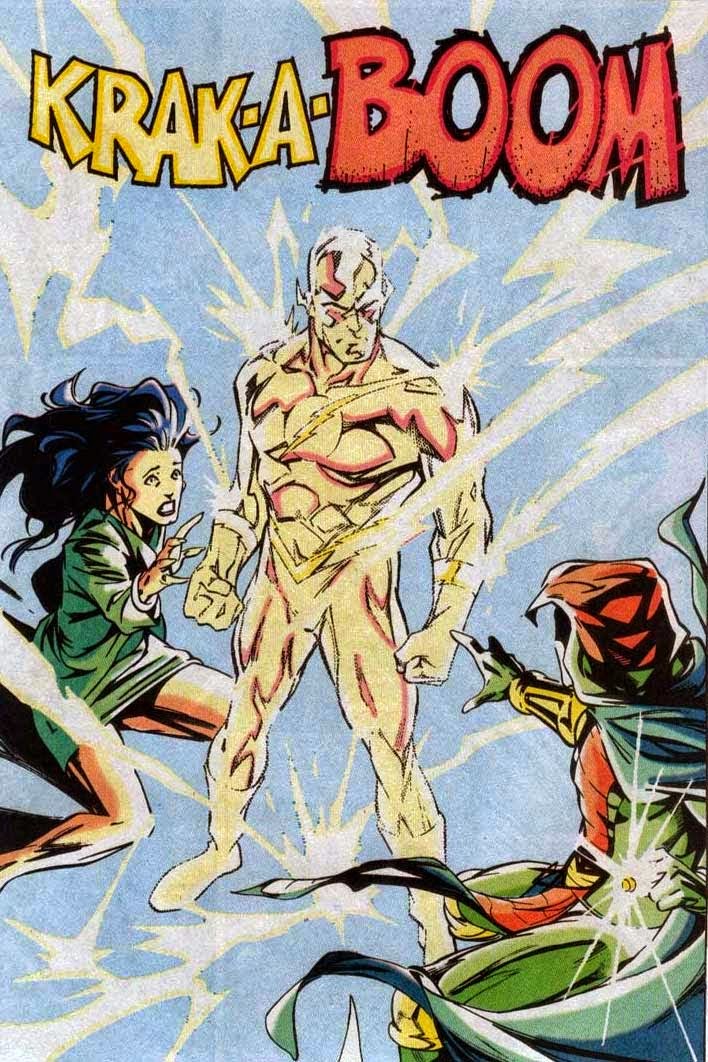 None of these other replacements were as successful as Wally, because the new generation didn't have his charm, and they didn't have his decades of continuity, dating back to the 1960s, which did create a complexity in the character, even in the cookie-cutter world of the modern superheroes.

Wally also had a strong supporting cast, with a team of super-speedsters, both old and new. Waid's run also had generally strong art, ranging from the perfectly-adequate (Greg La Rocque, Oscar Jimenez) to the actually-bloody-good (Mike Wieringo), with only a few duds, (Paul Ryan’s art can be charmingly open, but he was all wrong for the kinetic character, which is why the loose, scratchy art of Carmine Infantino remains the definitive version of the character).

And Wally's legacy was also built on a strong run of tight, fun and exciting storylines. He faced off against Lovecraftian horrors and super-speeding ninjas, dealt with his own imposters and new versions of old foes. And sometimes, Wally's abilities were his own worst enemy, and he couldn't stop himself from merging with the inter-dimensional speed force. 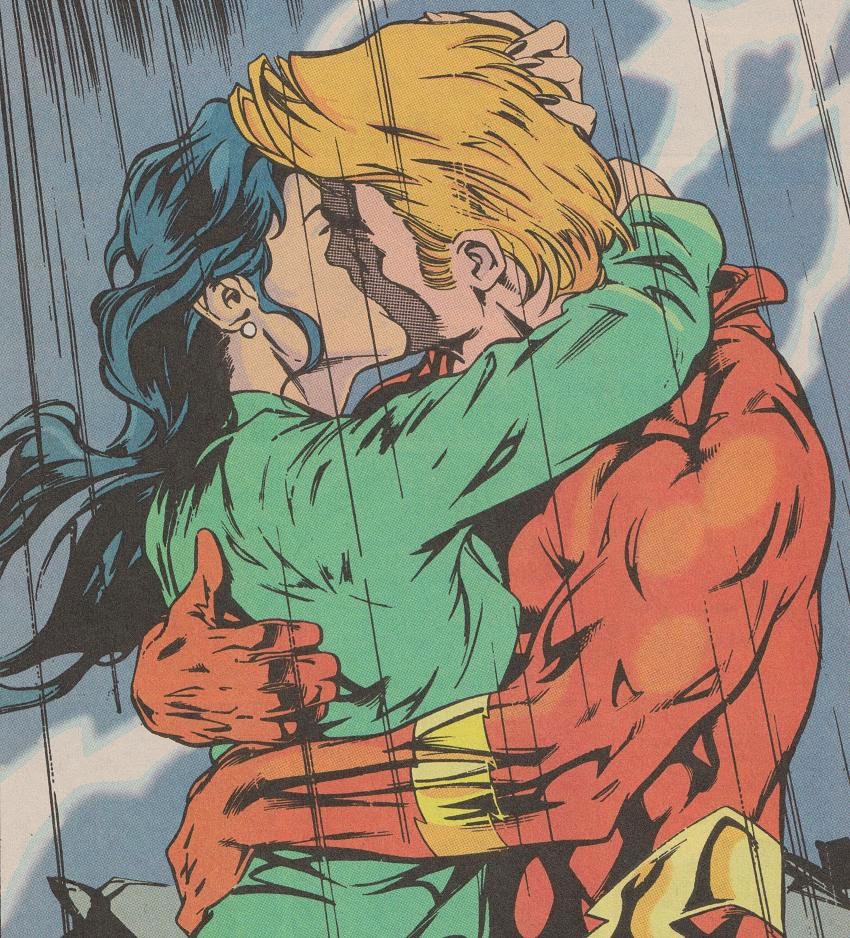 But Wally always found his way home again. He kept coming back, like he always did, and it was always charming, because it was his love for Linda Park that was a beacon leading him home.

Waid's story of Wally's courtship of Linda took almost his entire run, as their feelings and affections grew and grew, before the run climaxed with their wedding. This kind of relationship is the ultimate status-quo killer, but superhero comics could use a few more killers like that.

After all, it was just so nice to see a couple who always had each other's backs, who always stood by each other, no matter what, but still grew as people, without getting trapped in the same rut. They grew as people and as a couple, and that made The Flash one of the most unabashedly romantic superhero comics ever. 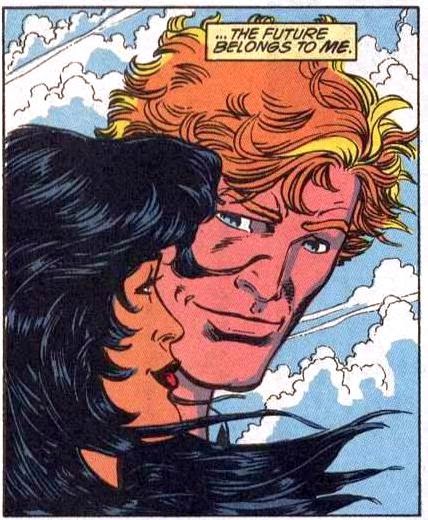 Their love was not bound by time and space (a plot point that is still getting some mileage in current blockbusters), and meant Wally could always find his way back to her.

But he’s not coming back any more. Barry Allen returned a few years ago and usurped his own descendent, and the New 52 reboot saw Waid's entire run booted into non-continuity, like it never happened.

But I followed Wally’s adventures all the way through, and while I’ve got rid of a good 90% of the comics I bought in the 1990s, I’m never getting rid of my Waid run and I don't care if they don;t count any more. They're a fantastic run of comics, and while they might not matter to the great DC tapestry anymore, they will still always be valid to me.
Posted by Bob Temuka at 7:12 PM

Man, I love the Wally West Flash - actually, I'm a big fan of the earliest issues of the series as they were just so darned weird - The Chunk, Kilg%re, Russian steroid addict versions of the Flash.

Wally West was a great Flash and to a lesser extent Kyle Rayner as Green Lantern, and it's one of my big pet peeves with DC that they've undone some good solid character development and sense of legacy and "defaulted" to the dull Barry Allen and Hal Jordan characters...