If you are going to take the piss out of super-hero comics, you have to really, really hate them, or really, really like them. One way or the other, or it just won't work.

There is no middle ground – Garth Ennis is supremely apathetic about super heroes, so his parodies always feel a bit too clever for their own good, and the super-decadence was always the most boring part of The Boys and Hitman.

But you can get away with it if you really hate them, because then you can rip into them with glee. Pat Mills fucking hates super-dorks, and that hate is a powerful driving force behind Marshall Law, and the amount of shit he puts them through in that comic is always, always entertaining

And you can totally get away with it if you adore superheroes. Without Mark Millar and John Romita Jr's love of all things superheroic – from the carnage of battle to the ultimate ideals – Kick Ass would have been a bloody grim comic.

The long-running Kick-Ass storyline finished recently, with the last issue of the third (or fourth; the jury is still out on the Hit-Girl numbering) series finally coming out a couple of weeks ago.

One of the main appeals of Kick-Ass is that the main character is constantly getting the absolute crap beaten out of him on a regular basis, and the only reason he wins any fights at all is because he’s a tough little bastard who won’t stay down. It’s that masochist subtext of superhero comics, made explicit text. We sometimes just like to see people get punched in the face. It's as simple as that.

And Kick Ass has also taken a critical beating, to match the in-story bruising. It’s ideologically unsound, outright offensive and gratuitously violent. This was never going to be a comic that people of good standing would bother with, and it always knew it, so it never bothered pandering to them.

I thought it was funny. 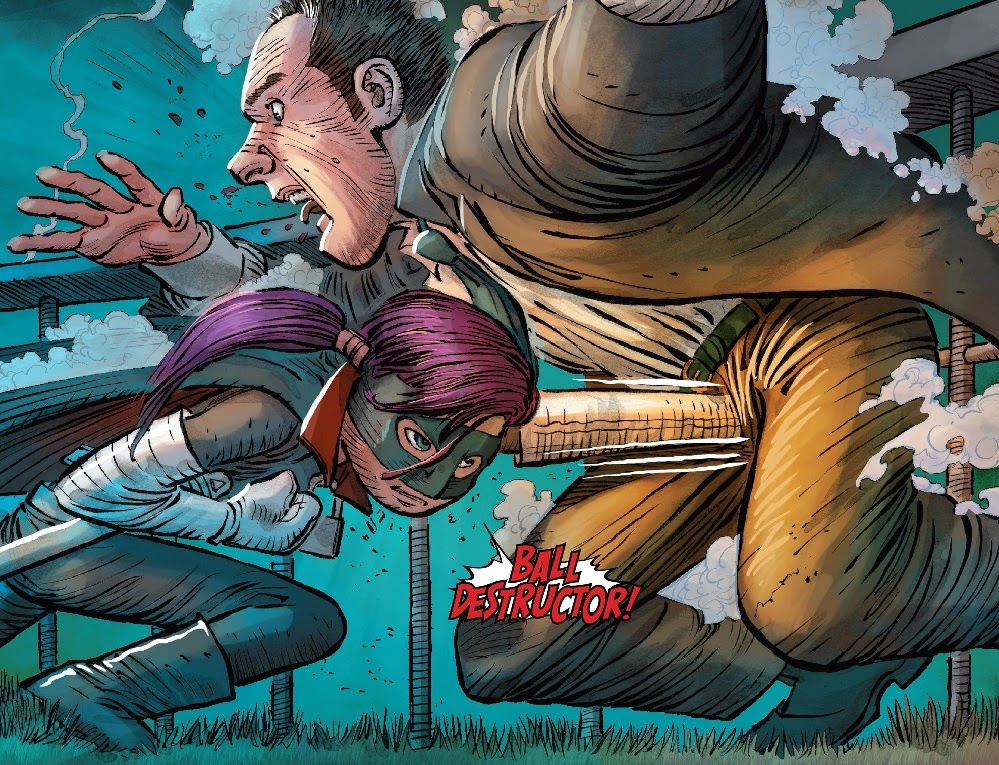 While I am a total ultra-pacifist pussy who deplores any real-world violence, I love bloody fiction, and it didn’t get much bloodier than Kick-Ass. It only takes a little tongue-in-cheek action for extreme violence and gore to become incredibly funny.

And for all its faults, I could never complain about Kick-Ass' willingness to go balls to the wall. If you're going for crazy, intense action, there is no need for a brake pedal, and this comic never shied away from making its situations EXTREME to the MAX, even if it led to the horribly unfunny moment where the bad guys mow down a bunch of kids.

(One of the failures of the second Kick-Ass movie is that it faced the same problem and blinked, and then joked about it, which didn't work at all. If you're not going to go all the way because you're too scared of what people will think, you've no business telling that story. Go hard, or go home.)

Still, thanks to some broken wiring in my brain, I have a soft spot for things that try and be offensive as possible, and Kick Ass went after some easy targets in modern culture, and gave away the game with the big shit-eating grin it always had. I still feel a tremendous amount of white male guilt about it all, but I just can't ever get offended by something I see in a comic book, because it's just a fuckin' comic book. 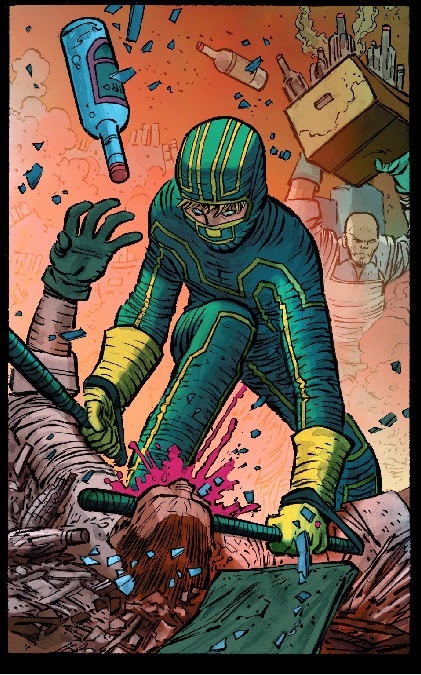 I just always thought it was hilarious how Hit Girl is clearly a psychopathic little shit who is genuinely mental - and I certainly don’t totally agree with her politics, but watching her gun down defenceless scumbags was never not funny. And seeing people complain that she wasn't a very good role model was ever funnier.

Of course she isn't a good role model. She's a psychopathic little shit who is genuinely mental!

But beneath all that happy anarchy, Kick Ass was built on a sheer, undisguised affection for super heroes. Not just Marvel and DC heroes, but the whole ideal of the super hero. What they mean, and what they represent.

There was always a part of Kick Ass that was maliciously laughing at how stupid the whole thing could be - the costumes, the masochism, the secret identities and all the fetishes, but there was also an unashamed love for the masks and heroism.

By the end of this series, Kick Ass grows up and puts on another, more adult, uniform, but he doesn't regret being a super hero, even with all the blood and tragedy. Because super-heroes gave him hope, and showed him that any problem, no matter how huge or horrible, could be figured out and solved.

We could all be a bit more Batman, or be as smart and kind as Superman. You don't have to dress in spandex to have a moral code and always do the right thing. Even the Motherfucker - one of the nastiest characters in the story - learns this lesson in the end.

Kick Ass could be a supremely annoying comic, with smart ass characters and smart ass writing. The post-credit sequence in the final issue is painfully arch, and the panel where Millar ties all of his comics together in one big dorky continuum is incredibly tacky.

But there is a joy to it all. It can sometimes feel like a waste of time and effort, caring so much about stupid superheroes and their stupid adventures, but the heroes themselves have valuable lessons to teach us, and can lift us up to their level, if we're willing to take the chance.

That's something worth going for. You can laugh at how stupid something is, while wholeheartedly loving everything about it, if you believe that enough.
Posted by Bob Temuka at 7:36 AM

Bob,
Do you agree with the notion that the entire kick-ass story (And Hitgirl miniseries) is actually Dave's coma dream?

I think Millar is (at least in his mind) above such an ending. Thanks, Jason.

Oh man, I never even noticed that. I guess it's just a clever joke on the creators' part, rather than any grand explanation, leaving the reader to believe it if they really want to.

I don't mind - I still think almost every piece of fiction ever made is still taking place in that kid's head from St Elsewhere...