This article was originally published in the New Zealand Herald. There is also this interview with Jenna Coleman. Who was lovely. 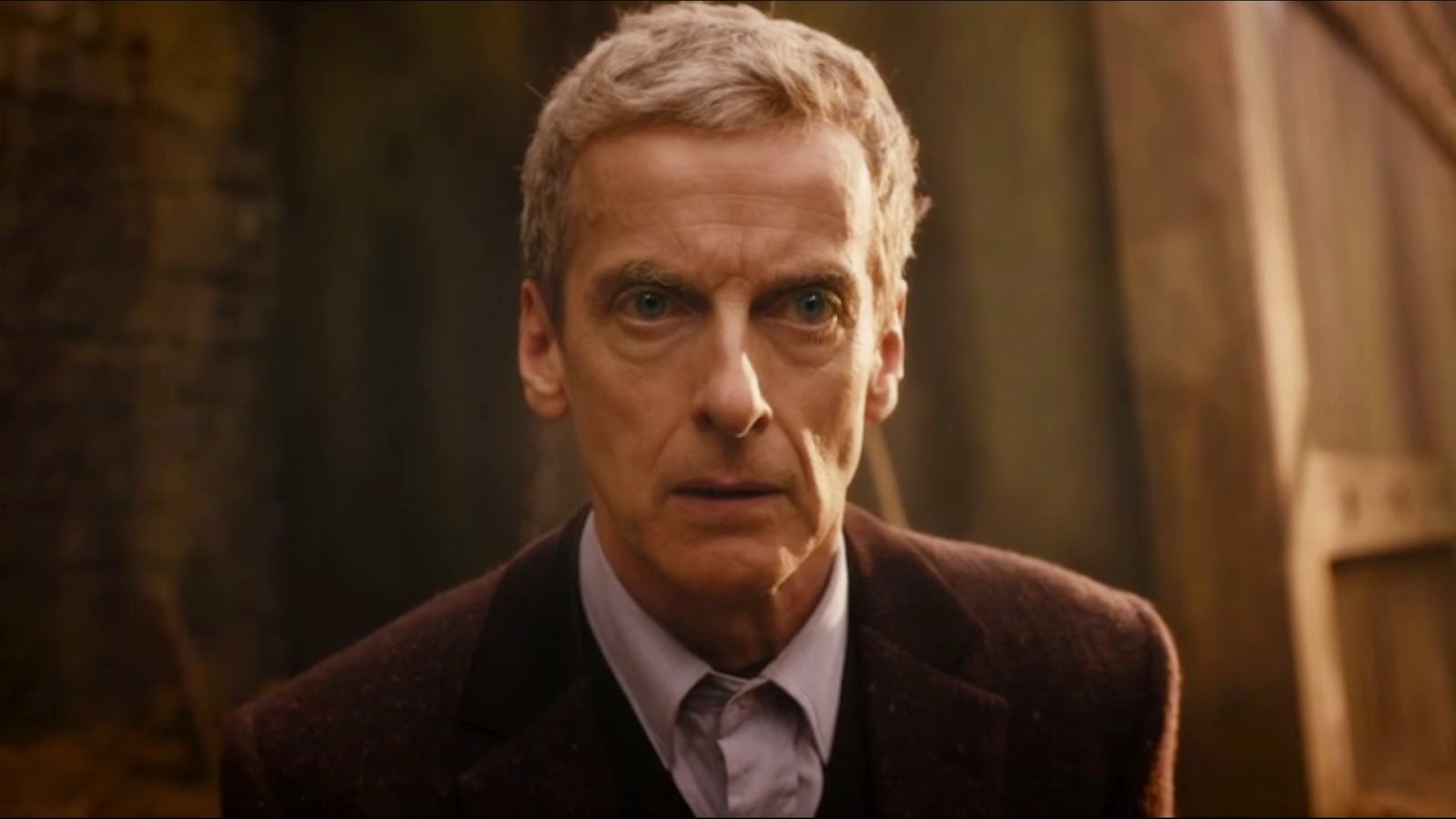 For two-and-a-half long months last year, Peter Capaldi knew he would be the next Doctor Who, but wasn't able to tell anybody he had scored the role of a lifetime.

Instead, he would visit the Forbidden Planet comic store in the heart of London, sneak up to somebody reading the latest issue of the Doctor Who magazine, and stand by them, taking joy in the fact that the oblivious reader had no idea the next Doctor Who was standing right next to them.

Especially when the BBC is celebrating the latest season, and kicking off the second half-century of the show, by sending Capaldi and his latest companion, Jenna Coleman, on a 12-day, six-city worldwide tour, just days after they finish filming of the latest series.

The latest Doctor and his companion stopped in Sydney last week on the fourth leg of the tour, and despite the punishing work and travel schedule, the pair were unmistakably excited about the new direction of the show.

Capaldi admitted he was nervous about the reaction to his debut, because although he was an unashamed fan of the show growing up, that didn't help much with a 21st century version of the character.

"I think he is different because the show has changed very much from when I was a kid, so one has to be true to what it is now, as well as hanging on to the past. And that's one of the things I love about Doctor Who. It carries the past with it, but is also moving into the future." 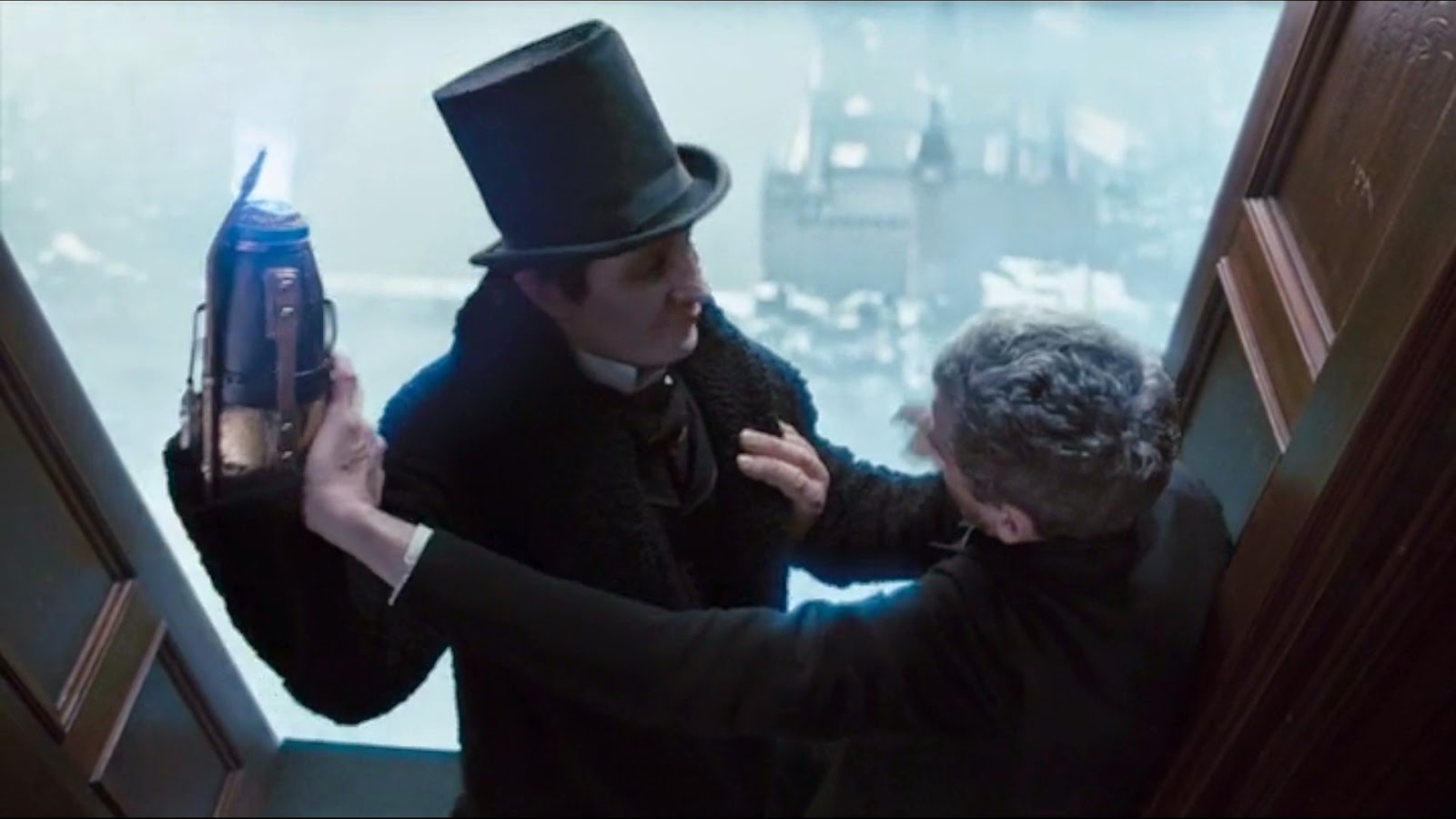 The role was a new challenge for the actor after a lifetime of strong work in films such as Local Hero and TV shows such as The Thick of It, where his magnificently eloquent Malcolm Tucker found all-new ways to fit outrageous profanity into his day.

But even though Capaldi had appeared in Doctor Who in a supporting role during the David Tennant era, playing the Doctor himself is something altogether different.

Each Doctor has his own personality and style, and Capaldi says he found his way into the character through head writer Steven Moffat's scripts.

"I guess because he had me in mind, he's been thinking about who the Doctor should be and how he should behave. I try and put as little space between me and the character as possible. So I don't think hugely about it. I just get on with it and try to do it."

Capaldi couldn't help bringing two things to the role: his extraordinary eyebrows - which got a special cameo of their own in the Day Of The Doctor 50th anniversary special last year - and his Scottish accent.

Tenth Doctor David Tennant had to suppress his Scottish accent when he took on the role, but Capaldi said he was always determined to keep it.

"I felt that it was important that I bring the Doctor to myself, rather than add a lot of layers of acting technique to it. I wanted to bring him close to me, so it would just be a faster conduit between me and the camera and the stories.

"We did do some other accents and stuff, but I was very clear that what I wanted to do is this. It would just be me."

Capaldi's first moment as the 12th Doctor was the regeneration scene, when Matt Smith transformed in the blink of an eye into something new and unknown.

Fittingly, the only thing Smith had to pass on to Capaldi for that scene was the wristwatch he had worn as the 11th Doctor, passing the time along. 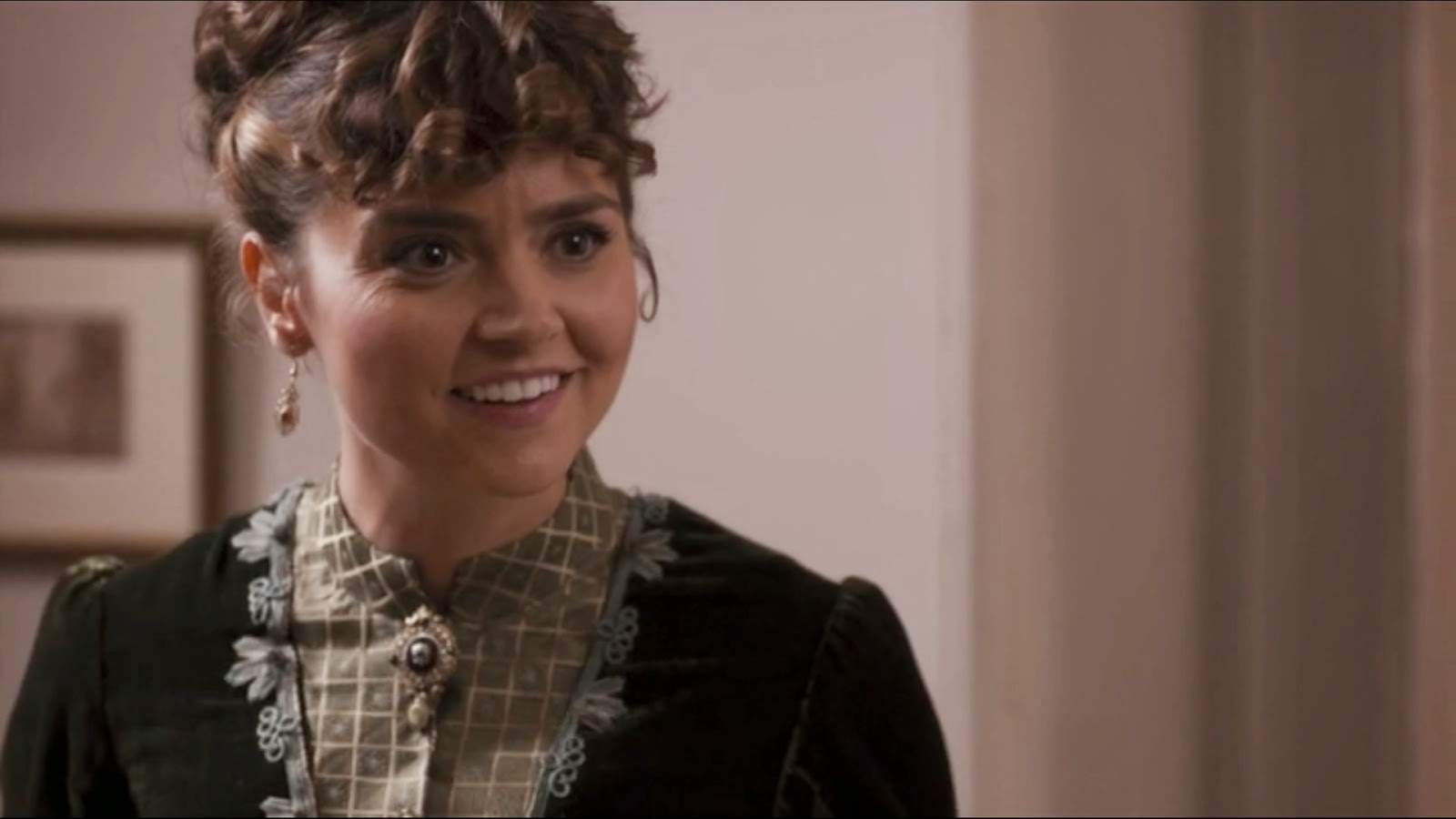 As the Doctor's current companion Clara, Jenna Coleman was there for the pivotal scene and the handing over of the watch and though rumours are circulating that she may be about to move on from the role, she is now on hand to take the Doctor's hand as he runs off down a corridor into a new era. Despite working through the Doctor's biggest year ever in 2013, she told TimeOut she did not have much advice to help Capaldi deal with the phenomenon.

"You just have to take it day by day. It's so huge and it's such a big franchise, it's like being on a freight train that's moving really fast. Because so much happens - you meet the Queen and do things like Dr Who Proms and go off to Comic-Con and all these amazing things, not to mention the day-to-day filming. So it's its own beast."

But there is also a new, more unpredictable dynamic to the relationship between the Tardis crew, and Capaldi said an initial spikiness between the two would not be resolved easily.

"Occasionally we would find that the Doctor and Clara think that they're okay, but they're not, because the Doctor can change, and that triggers different changes with Clara, also.

"It becomes incredibly complicated," said Coleman, "especially because this Doctor is still trying to figure out who this Doctor is. So that kind of unpredictability and instability between them both is really interesting, from story to story over the series."

Capaldi had little problem summing up the appeal of the 51-year-old show, pointing out that it changes and grows over time, while also being able to tackle any genre.

"The great thing about Doctor Who is that you can move from genre to genre, week by week.

"And there is one episode in particular, which I think is wonderful, where we have a monster where we're not even sure it's there, which is really quite scary, and there are really very few people in it.

"I think it's unmistakably Doctor Who, but there aren't many larks in it. But at the same time it's quite funny, in a different way."

Coleman said the different directions the programme takes meant the two lead actors could have their own ideas on what makes a great Doctor Who story.

"Me and Peter are quite different. It is such a boy/girl thing. He likes the excitement and the explosions and the Daleks and all that, while I'm more into the ones that are a bit more fairy tale."

For Capaldi, his Doctor starts in the first scene of Deep Breath on a dark little beach on the banks of the Thames, and any romance he felt about the job took a hit when he had to hide himself away in the Tardis shell for the first time, squashed up against Coleman, with a props guy spraying a smoke gun at their feet.

It was a chilly, cramped start to his career as the Doctor, but after knocking off his first season, he is already getting the hang of things.

"I think in future I'm going to have a little electric fire in there, and a kettle. And some beverages." 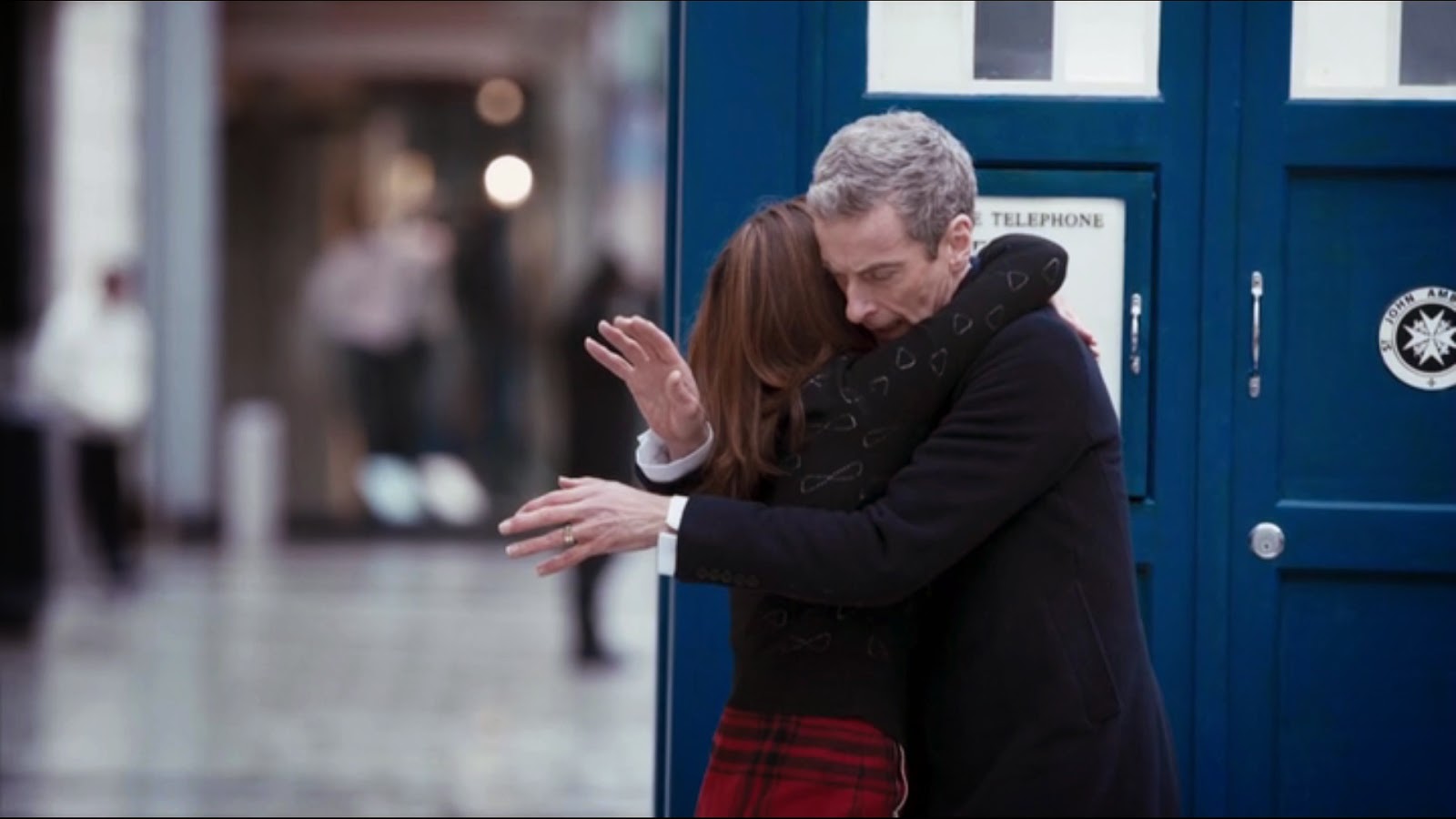 Life-long Doctor Who fan Robert Smith says the first episode of the new Doctor points to a future of beautiful uncertainty - just like it should.

It's more than just a new face when a new actor takes on the role of the Doctor.

Some things will never change - there is always the Tardis, the snappy sidekick and a sharp coat - but a new Doctor means a whole new dynamic for the time-travelling sci-fi drama, with a new personality, new style and new tone for the overall series.

That dynamic is obvious in Peter Capaldi's very first episode. Deep Breath spends a lot of its extra-long running time asking who this new Doctor is, and leaves his companion Clara wondering what his nature truly is, and what he is capable of.

It's difficult to judge a new Doctor's era based purely on his first episode - the new incarnation is usually still recovering from the shock of his regeneration, before getting his head together and standing up tall to the latest monster.

But it's also clear from Deep Breath that this is a very different Doctor from his younger, more energetic predecessors - less friendly and open, but no less determined, and more compassionate than ever.

Of course, even with all the pressure of kicking off a new era, Deep Breath is still a Doctor Who story, so there are horse chases and desperate grappling with a monster - both verbally and physically - high over the streets of Victorian London.

Director Ben Wheatley brings a sense of gloomy darkness into the bright world of the Doctor, with lots of scowling and concerned looks, but there are also the usual light touches typical of an average Doctor Who adventure, including a couple of moments of outright slapstick humour.

It's this invigorating mix of scares and cheers that makes the series just as fresh and new as it was in the days of William Hartnell or Jon Pertwee. Doctor Who is always changing, and always becoming something new, riding the zeitgeist into a whole new generation.

And Peter Capaldi's new Doctor is just the ticket for that ride. He is not the cute and cuddly Matt Smith Doctor, or the dashing, verbose David Tennant Doctor, or the grim and Northern Christopher Eccleston Doctor.

He's something new, and it will be a pleasure to uncover his personality.
Posted by Bob Temuka at 3:26 PM