Why I love Lobo (and you probably shouldn't), by Max Zero

Lobo is a one-joke character, and if you think that joke is puerile, immature or obscene, it’s obviously not the comic for you.

I fraggin’ love that joke, and can’t get enough Lobo comics. 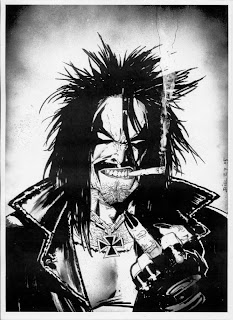 It’s hard to believe now, but there were at least two or three months in the early nineties when Lobo was the coolest and most popular in all comics. It didn't last, but still showed that new characters with attitudes that could be reprehensible to older readers could still find a solid audience.

Lobo first showed up in the Omega Men in a godawful pastel skintight costume, created by Roger Slifer and Keith Giffen, and then appeared in his leathers in Justice League International and L.E.G.I.O.N. comics. But his first mini-series made him a proper comic book star, thanks largely to Simon Bisley’s grisley details and rampant brush, and Giffen and Alan Grant’s real wit, hidden deep within the hyper-violence

Lobo was always a blowhard badass, but that hyperactive first mini-series crystallised the character as a terrible force of nature, driven by primal desires. In a comic book universe full of superheroes who always did the right thing, the Lobo philosophy – that with great power, comes no responsibility, just loads of mayhem – might have been nihilistic, but it also felt fresh and exciting. 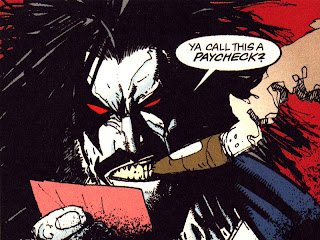 Lobo is a reprehensible character, make no mistake about it. He does have a code, a soft spot for space dolphins and a real sense of honour, but he is other wise thoroughly unlikeable – a psychopathic maniac who leaves chaos and destruction and beer cans in the wake of his passing.

But I don’t want to be friends with all the characters I read about in comic books, and it’s all right to have an unlikeable main character, and still like the stories he is in. The films of directors like Ben Wheatley and Steve Soderburgh can be full of utterly repellent characters, but still be great films. There isn’t a single likeable or honourable character in Goodfells, but it’s still a great fuckin’ movie.

There are a lot of things I don’t like about Lobo, but it’s his crassness and refusal to apologise for it that makes him such a great character. Lobo will never admit there is anything more to life than partying hard and playing rough, and there is a weirdly enviable purity about that.

Besides, he only really hurts bad people who really deserve it. Most of the time. 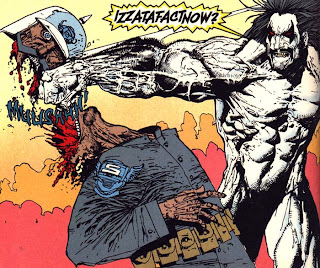 That level of chaos and destruction in a comic character has been repeated over and over again in the past two decades, but it actually did feel interesting in 1992, and for a brief moment there, Lobo really was the most popular character in all of comics.

This inevitably led to a glut of Lobo comics, and while the basic joke about Lobo is a strong one, it can still be stretched too thin.

There were tonnes of weird little mini-series and one-shots. Giffen and/or Grant were usually involved with all of them, and they did produce the excellent Unamerican Gladiators with Cam Kennedy and a couple of cool one-off stories with gorgeously grotesque art from the likes of Kev O’Neill and Marty Edmond.

But by the time Lobo actually got his own ongoing series, the joke had been told too many times, and his moment had passed. I still have a huge soft spot for the monthly Lobo series, thanks largely to some terrible, terrible puns and the criminally underrated artwork of Val Semekis, and it did manage to last five years before cancellation, but nobody really cared about Lobo anymore, and he became another punchline in the jokes about early nineties comics. 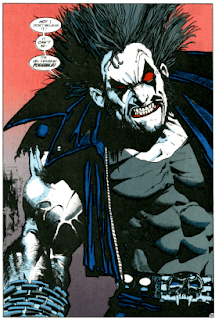 I know people who never read any comics, except Lobo. They think he’s the greatest comic character ever, and have no interest in any other comics. They just like reading Lobo.

It’s easy to sniff at Lobo for being lowbrow and tasteless, but sometimes it feels like shameless trash is the only thing that feels real and true. Lobo sticks his finger up at The Man, and then pisses on The Man’s mutilated corpse. Who wouldn’t get a kick out of that?

It’s surprisingly hard to get that right tone of dopey humour and raw mayhem that makes Lobo work, and his infrequent appearances over the past few years have missed the point spectacularly. Even Grant Morrison, who can sum up somebody like Green Arrow in one great line, completely failed to really get the character right in 52 (probably because – as the writer admitted – he just didn’t understand Lobo at all).

I just made the unfortunate mistake of looking up Wikipedia to see what the current status of the character is. Unsurprisingly, with the DC Universe's current rule that all characters must have either a) daddy issues, or b) a lost love, it turns out that Lobo is now a 'proud Czarnian slaver who killed the rest of his race except for his beloved Princess Sheba'.

Lobo isn't pining away for some chick - He's a primal force of chaos and stupidity. Anything else is fragging ridiculous.

Max Zero - a proud member of the SSoSS - is the Earth-CBR version of Bob Temuka, where it’s 1997 forever!
Posted by Bob Temuka at 4:03 PM

I kind of agree with all of this, but at the same time, my favourite Lobo story is Hitman vs Lobo, which is written by Garth Ennis, who clearly doesn't like Lobo

Lobo was so popular in the 90's he was actually featured in a commercial for DC Comics! "These aren't your daddy's comic books, fanboy!" It seems like a fever dream.