Why I love Dan Dare (and you should too), by Matt Emery

I love reading the Tearoom of Despair. I'm a similar age to Bob and I've found through his blog many shared comic and pop culture experiences to the point that I feel like an alternate North Island version of Bob, right down to having a partner who indulges my taking detours to find comics when we're on holiday together.

While Bob's away, I thought it a good opportunity to write about a character I'm eternally fond of from my initial forays into reading comics. My first experience of Dan Dare was in the third Eagle annual from 1953 which my mother gave me in 1981. Eagle annuals of this era were dense with text stories (of no interest to this six-year old) but with a smattering of comics including the beautifully painted Dan Dare and Riders of the Range strips. 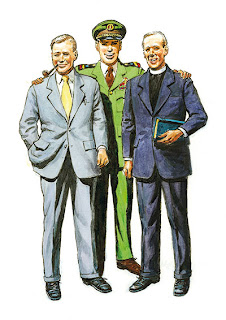 I think it was the colours that initially drew me in, beautifully painted art with a colour scheme that hinted at a bright and wonderful future. I trawled through garage sales, flea-markets and newspaper classified ads to find more Eagle annuals. Around that time The Best of Eagle was published. This volume compiled by original Eagle editor Marcus Morris featured various stories and pieces from the original run of the comic (1950-1969).

I had to put the book on lay-by and pay it off with paper run money, but eventually it was mine and I became further ingratiated into the world of Dan Dare. Dare appealed for his heroics and faced danger with an English stiff upper lip. 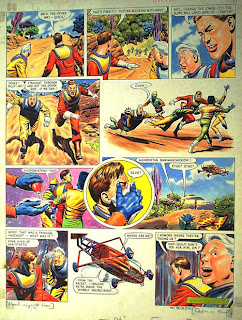 Unlike many of today's heroes of fiction he wasn't inspired out of any tragedy, his motives were purely altruistic. He was just doing his job. Around this time my father introduced me to 2000AD, handing me a copy of Prog 4 and 9 which - to my surprise - featured a different incarnation of Dare. 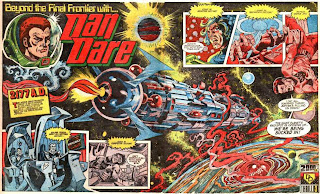 A more serious, violent, action packed Dare, completely removed from the original concept other than sharing the same zig-zag eyebrows. This Dan Dare intrigued me, but didn't hold the same interest as the innocent charm of the original. Massimo Belardinelli's exotic drawings were weird and scary and nothing like the traditionally painted Dare I was familiar with.

In the early eighties I picked up the first 100 progs of 2000AD through a classified ad for 10 cents apiece and got to read the further exploits of the Dan Dare of the seventies. I enjoyed the gorgeous art of Dave Gibbons and the sense of danger in these stories. At one point they killed off Dare's entire crew and left him floating in space on a piece of wreckage.

Dare was revived a little while later as some kind of space marshall (under mind control of the Mekon) but the story meandered and was never concluded. I found out later in a Dan Dare annual this incarnation was the same character from the fifties but he had been in a 'Buck Rogers' form of suspended animation after an accident and awoken in the far flung future. The accident required him to have plastic surgery in explanation for the modernisation of his character. 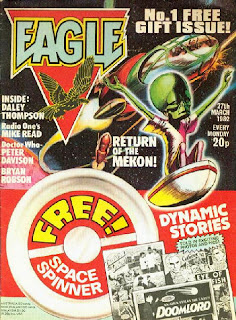 Still in my pre-teens, I also discovered the new incarnation of the Eagle which was relaunched in 1982. The first several issues featured artwork by Gerry Embleton on a new version of Dan Dare, the great grandson of the original character. Embleton's pages were painted and beautifully detailed, recalling the fine work of Dare artist Don Harley in the fifties.

The initial stories were written by 2000ad mainstays John Wagner and Pat Mills and featured the same sense of danger and adventure that infused their work in 2000ad. Within a few issues Dare's nemesis the Mekon had destroyed earth's parliament with a suicide bomber, enslaved the populace of earth, and captured Dare's descendant who faced execution. As a young kid I lapped this stuff up.

Other artists would take over from Embleton within several issues, Oliver Frey, Ian Kennedy and Ron Turner being three that particularly stood out. I stuck with Eagle for a good few years but eventually the stories lost the impact of the initial work, I think when different writers came onboard. 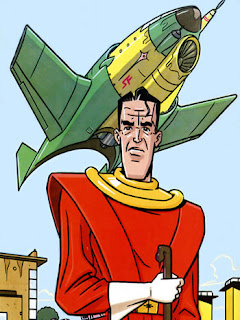 In the years since, I've read Dare in other incarnations, the dystopic take on Dare by Rian Hughes and Grant Morrison, and the recent Garth Ennis and Gary Erskine mini series. These were interesting but I don't think it's possible to tell Dan Dare stories today like the work on the original by Frank Hampson, Frank Bellamy, Don Harley and Keith Watson.

The original Dare was produced in and informed by a post war England, which was a more optimistic and innocent time than today. English artist Chris Weston is the only candidate I'd consider for doing a traditional take on Dare. Weston seems to be one of the few artists that has a passion for the character as he was intially conceived. 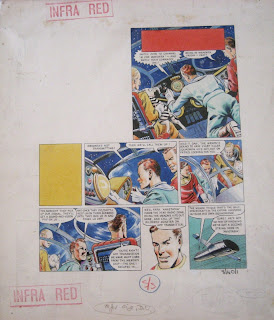 In my adulthood I've been fortunate enough to buy an original art board of Dan Dare from 1958, painted by Desmond Walduck from layouts by Frank Hampson. It was interesting to see these lavishly detailed pages were painted on a 1 to 1 scale with how they were reproduced in the comic.

The seller had bought it in 1978 for 25 pounds, a week's wages at the time, and he had to kept it a secret from his likely to disapprove spouse. Consequently I paid a weeks wages for it in 2009 and I too decided it prudent to bring it into our house with utmost discretion.

Matt Emery is the Earth North Island version of Bob Temuka, who picked up a Lion annual from 1963 instead, and fell in love with the dastardly Spider. He's been up to no good ever since...
Posted by Bob Temuka at 11:55 PM