There is a lovely little moment in the last issue of Jeff Smith’s fairly challenging Rasl comic, where the main character nonchalantly explains what the comic’s title actually means.

It’s an answer to a question that had been there ever since Smith first announced the project, but one that hadn’t been asked in some time. The way the moment is handled is pretty clumsy and just a bit tossed off, but it’s also a charming and sentimental part in the middle of a violent and dangerous climax.

Which sums up a lot of the comic’s appeal – the story doesn’t quite work and the deliberate confusion often stops it dead, but it’s still a hell of a ride, with little doses of brilliance. 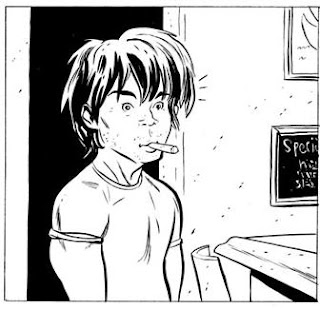 And it’s definitely not Bone. Smith’s epic fantasy comic is so good, it is going to overshadow everything Smith ever does for the rest of his life, but at least he’s been trying something new over the past couple of years.

Rasl does have a lot of superficial similarities to Bone – a devotion to a single moment in the pacing that gives individual scenes a lot of power, and that goofy ‘n’ gooey black and white art.

But Rasl is a very different comic to Bone. It’s a science action story. It’s a desert noir, a scientific lecture and the story of an incurable romantic. It’s about parallel worlds and parallel lives. There were some bits that were some of the horrific things I’ve seen in a comic in years, and lovely little touches in the panel-to-panel progression.

Bone’s grand plot started heading up its own arse in the last third of the run, but was overall a tight story. In contrast, Rasl is all over the show, bouncing around inside its own narrative over its short 15-issue run. Events skip back and forth and there are flashbacks inside flashbacks (and with the first four pages of the whole series starting at the very end of the story means almost the whole comic is actually a flashback.)

There is a large and slightly flabby section in the middle of the series where the backstory dump – combined with a detailed history of Mr Nikola Tesla – can leave the reader wondering what the hell is going on, or where things are going. Reading the series as each new issue came out could also cause frustration, as the long gap between each issue made it hard to keep up as it was.

(Full disclosure: After getting the first couple of issues, I somehow missed the next three, and I only tracked down the last missing one a week before the final issue came out, so my own initial reading of the non-linear narrative is even more jumbled up than the usual.)

But this kind of deliberate obtuseness is only to be expected, and almost demanded, from a story featuring irresponsible travels between parallel worlds. The main character barely knows what’s going on, and is frequently baffled by subtle things like the complete breakdown of the laws of physics.

There is nothing wrong with a bit of complexity, or the odd unanswered question. You don’t need the Secret Origin of the slack-jawed girl, or know the exact moment when Rasl figured out who Uma actually was. The science itself is impossible enough to be comic-book plausible, and that’s all the information you need. All the fun is in figuring out where the hell you’re going now.

And besides – it’s not that complicated. The story mainly takes place on two different worlds, over a fairly short period of time, with less than a dozen main characters, and it’s actually fairly easy to keep track of which world things are happening on, (just see who is still alive or what Bob Dylan’s name is).

And it’s fun – lots of sex and violence and Tesla. I have a particular fondness for stories about the Philadelphia Experiment, and SCIENCE GONE MAD, and Rasl certainly delivers on that score.

It’s also easy to follow because the story is illustrated by a seasoned and proven comic artist like Jeff Smith, and his slick and distinctive style is – as always – the best and worst thing in his comic. 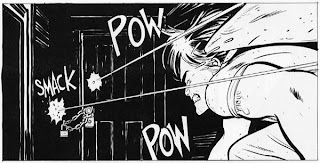 Smith’s animation background still saturates every page he draws, usually to great effect. Everything flows so smoothly and his pages have a strong beat to them that make each sequence an easy joy to read.

Everything is all clear, all laid out in the open, with only the most necessary lines. This clarity becomes particularly effective in Rasl’s action sequences, and there are quite a few of them. They have a heft and movement that so much modern comic art doesn’t have. A punch might get thrown across six panels, but it lands like a motherfucker.

The clean art is also paradoxically perfect for the moments where it all breaks down – when something really strange happens in the story, and there are a few of those too. Time bends and snaps, perceptions of reality go mad mental crazy, up is down, black is white and your place in the universe is not assured.

The clearness of Smith’s line gives these moments of extreme oddness a strange grounding in reality, which just makes them so much stronger. When science breaks down, reality goes with it, but need a control subject, and can find that normality is Smith’s clear line. 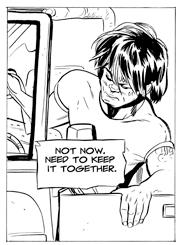 And yet, for all its strengths, there are moments where his art really doesn’t work for the story, because it’s just so goshdarned cute.

It’s arguable that Smith’s style only really works for stories full of wide-eyed wonder, and certainly not anything that was really and truly dark Unfortunately, there are moments in Rasl that prove this point: parts where the main character is acting all tough and cool, but it doesn’t work - because he looks like a big baby.

The gigantic heads Smith gives his lead characters is obviously a stylistic choice, because there are loads of periphery characters with normal-sized melons. It’s just the way Smith likes to draw people, and there is a certain charm to it, but not when you’ve got the hero staring down the bad guys with nerves of steel and a big bonce. It just does not work.

(Although there is one notable exception – the main villainous guy, whose face is so elongated – like a lizard – yet never really commented on in the story. His own evil has deformed his features, and he’s like a brutally ugly henchman from an old gangster flick. It’s kinda marvellous.) 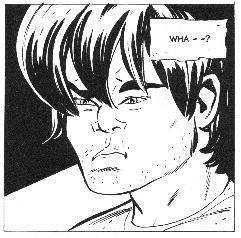 So it drags at some points, and the art is sometimes woefully inappropriate, and it tries too hard and ends up being a bit too clever for its own good. It doesn’t matter – it’s still a terrific comic book.

Because despite all these faults, Rasl is still funny, clever, fast-paced and a bit crazy. Like a lot of almost-brilliant comics, it doesn’t reach the heights it’s going for, but at least it’s reaching for them.
Posted by Bob Temuka at 11:29 AM