(Warning, this post contains big-ass spoilers for Criminal: The Last Of The Innocent)

After decades of comics showing that committing any sort of crime has some sort of consequences, it’s actually slightly jarring to read one where the main character commits a heinous and violent murder, and totally gets away with it.

On the other hand, since this is happening in the pages of a Criminal storyline, and since Ed Brubaker and Sean Phillips have delighted in playing off genre convention with unexpected results since the first book, it shouldn’t be all that surprising. 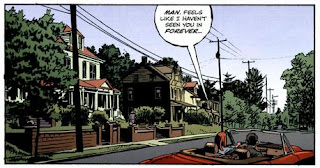 For reasons far too boring to go into here, I only get Criminal when it is collected in a trade paperback, even though I happily buy a new issue of Incognito – and now Fatale – every month.

There is just something so satisfying about a Criminal story when it is full and complete, and can be read in one sitting. Each one is an absolute delight – the most efficient comic on the market also comes with deadly doses of darkness and weird emotional epiphanies. 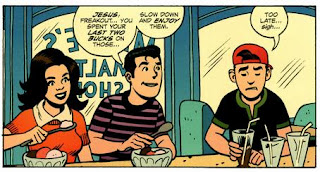 Despite being extraordinarily late in jumping on the Criminal bandwagon, I now get each new book as soon as it comes out. This means I have to wait a few months, but that’s okay – I can wait.

What I can’t do is avoid general reviews. While I have no desire to spoil anything, I can’t help skimming through reviews and previews, just to get an idea of the general critical vibe.

That vibe was – as usual – almost uniformly positive for the first few issues of Last of the Innocents. The inspired use of Archie analogues gave this particular slice of noir an extra emotional punch, and, as many noted, it was a story that could only ever really work as a comic. You couldn’t evoke that Archie atmosphere and get a similar effect in a movie or TV show. 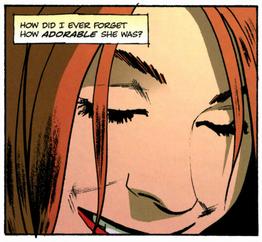 But while the series still featured on a number of ‘Best Of’ lists at the end of the year, the vibe was hit by a nagging sense of disappointment when the final issue rolled around. While many critics and readers appreciated the ending - in which the Archie character kills the Veronica and Jughead analogues and totally gets away with it - there were many others who felt that this particular Criminal ballad ended on a flat note.

It’s easy to see where they are coming from. After Riley Richards stabs his beloved Felix in the eye with an ice pick, there is a creeping sense of dread and despair. There is no way Riley can get away with it, especially when his enemies (and best friend) know exactly what he has done. Some kind of terrible retribution is inevitable. 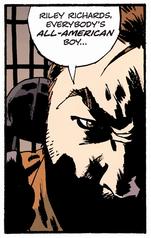 But it’s also totally avoidable. Stories don’t always go the way they should, and Riley ends up with his dream girl, the beach house and the millions of dollars. He’s killed his best friend and his wife, and there are hints of regret in those final pages, but they are only hints. Riley has simplified his world again and he figured it was worth the cost.

I admit - my first reaction to Last of the Innocents was vague dissatisfaction, because I was expecting some kind of gory and intense end, and it just didn’t happen like that. But I’ve been more than satisfied with it on subsequent re-readings, because I didn’t know what the story was the first time round.

This isn’t the story about a man being punished for his terrible crime, it’s about a man willing to go to horrible lengths in a bid to get his life back into a teenage ideal. 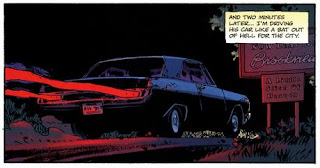 And this kind of ending, where crime actually pays, is genuinely unexpected. Everything else in the genre, from the EC crime comics of the fifties to David Lapham’s mad Stray Bullets, has shown that committing a crime has some sort of consequence. Even people who aren’t punished by the law face some sort of karmic justice, or are mentally destroyed by the experience. Because crime is bad, and nobody gets away with it.

Which isn’t always how it works in the real world. Despite nightly doses of CSI bollocks on the TV every night, a lot of people do get away with all sorts of crimes. These types of things don’t always wrap up nicely. 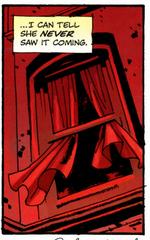 And Brubaker has been using that expectation against us since the end of the first volume where a mortally wounded Leo was supposed to slip away into death as police come closer – eyes flutter, police lights blur, roll credits – but finds it’s a lot easier to kill than it is to die.

While this kind of ending is difficult to pull off, Brubaker and Phillips just keep on doing it, to the benefit of the larger story they are telling. 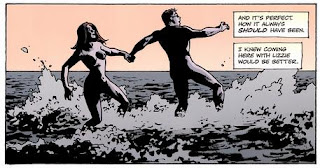 Creating a good crime comic is a lot harder than it looks – Vertigo’s recent line of original crime novels have produced a lot of mediocrity, and nothing truly great – but Criminal is Brubaker’s best work, and his obvious love for the genre shines through on every page.

It’s not just the unexpected twists and turns the plot takes, it’s the overall story of generations of crime, making the same old violent mistakes and (not always) suffering terrible fates. And it’s the gorgeous and moody art by Sean Phillips. And it's the little connections to the greater criminal story, with Sebastian Hyde and Teeg Lawless showing up. And it’s the fact that it’s also still very funny – the line about Riley only really existing when people were watching him was a cracker – with the crispest dialogue around, making each new volume absolutely entertaining

Like several other stories in the series, Criminal: The Last of the Innocents doesn’t end like you think it would or should, and the story it’s telling might not be obvious from a first reading, but that’s what I dig the most.
Posted by Bob Temuka at 10:38 AM