Grant Morrison’s fascinating run on Batman came to a natural conclusion with the Return of Bruce Wayne, with Batman’s return from a fate worse than death suitably apokalyptic and fun.

But Morrison was apparently getting so much enjoyment out of writing Batman that he carried on with Batman Inc, a series that has managed to be exciting, essential, inconsequential, dark and silly, all at the same time.

Stories don’t always stop where they should, but that’s not always a bad thing… 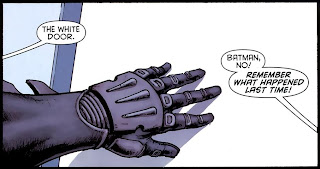 Consider Vertigo’s ultra-resilient Fables title. Everybody knows it was supposed to end with the defeat of the Great Adversary, even Bill Willingham. But Willingham ignored that general wisdom and wrapped that particular tale a couple of years ago in three issues flat, and then went on to do other things with the title.

The post-war Fables stories have provoked a nagging sense that the story is finished and everything after is epilogue, which is a little odd to think of when you’re talking about characters whose stories have become literally endless over the centuries, and that idea that things have moved past the predictable ending that was always going to happen gives the comic a terrific sense of freedom and unpredictability. Anything could happen now. 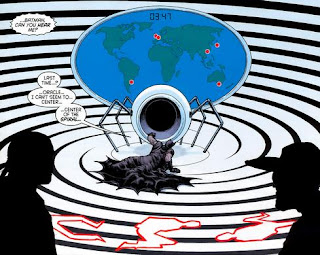 There is a fair bit of that Fables factor in Batman Incorporated. The first volume of Batman Inc recently wrapped up with the double-sized Leviathan Strikes, leaving ten issues of comics that tried to do something new with Batman beyond the natural conclusion of Morrison’s story.

And yet, while it was a typically witty and trippy and fast-paced Morrison Batman series, it sometimes tried too hard to be now and fresh and interesting, and the story sometimes out-paced itself, leaving the reader gasping in its wake. Morrison’s superhero shorthand allows him to skip past all the dull bits and nail one scene in a couple of observant panels, but it can also cut out a lot of emotional resonance, and the story is in dire danger of becoming a Series Of Events, rather than an Actual Story.

This sense of all surface, no feeling was not helped by the series’ initial artist - Yanick Paquette – whose work was a bit too flat for the intended effect  The colours were also oddly muted, when they desperately needed to be bright and garish, and the entire comic looked dangerously un-sexy.

Still, while it had its faults, Batman Inc still managed to be the most entertaining and interesting Batman comic being published every month. By taking Batman outside his Gotham comfort zone, the series gained a zesty international flavour. After thousands of issues set in Gotham City, seeing Batman engage in the big wide world is still refreshingly satisfying.

The series also saw the startling development of artist Chris Burnham, who is quickly shedding the Quitely influence to build his own unique style – his line is getting a lot looser than Quitely’s, and he doesn’t have - or need - that same obsessive attention to detail.

And it was a Batman comic written by Grant Morrison, who manages to be deadly serious while retaining an ironic sense of how beautifully absurd it all is. It was an idiosyncratic and deeply individual story produced within the rigid confines of corporate comics, and that is something that is always worth celebrating.

The most surprising thing about sneaking these high-faluting ideas into a Batman comic was that is actually paid off, because there is a real audience for that kind of thing. The first volume of Batman Inc remained one of DC’s consistently top sellers over its short life, outpacing many other comics with 'Batman' in the title, without resorting to tie-ins to dubious events, or superstar artists.

It was a comic that proved that truly individual stories told in a slightly challenging format could be sales successes.

It couldn’t last. And it didn’t.

Because then the new 52 came along and brought back the same old Bat doing the same old Bat-shit in the same old Bat-town, and while creators insist that there are vital differences between Batman and Detective and Batman & Robin and David Finch Batman, there really isn’t much of a difference from a slight distance - just that same old status quo, spread across titles that share that same intensely scratchy art style. All-new, all-extreme, all the time.

Batman Inc was shunted off to the side in this latest soft reboot, the final relic of a obsolete continuity which doesn’t fit with all the other regular titles, and no longer counts in the greater Bat-story. Batman Inc is left feeling like a time capsule from six months ago, passing itself off as the brand new thing, when it’s been relegated to the old – and not even old enough to be interesting again.

It’s hard to deny the financial success of DC’s 52 initiative, but it’s succeeded by retreating to tried and tested formula. Just when it looked like things could be different, they’re back to the same old games. There might be imaginative mutilations and locked room mysteries in the new Batman comics, but that’s nothing really new.

One unfortunate side-effect of the DC relaunch is that it’s shown that while something like Batman Inc can gain enough readers to be a consistent sales success, the only really big sellers are those driven by large editorial visions, rather than eccentric and singular ideas. And while it certainly pays off in the short term, this kind of pandering to a committed base is only going to have diminishing returns.

Then again, Batman Inc is not dead yet….

The series returns later this year, even though, for a while there, it looked like the second volume of Batman Inc was going to be one of those projects that Morrison never quite got around to finishing off. But DC has enough goodwill towards the Scots writer – and has made enough money off his ideas over the years – to let him finish the story, even if it is an odd fit for the new DC universe.

That could be for the best, because Morrison’s comics always work a bit better when they’re just a little out of sync with the regular universe. His audacious Seven Soldiers work was not quite in the same world as Batman, and the pleasantly jarring appearance of Booster Gold in the pages of Doom Patrol gave that comic some necessary context.

So if Batman Inc goes off and does it thing, it doesn’t really matter if it doesn’t fit with the current Detective Comics. Those weird little pathsoff the main continuity road are where some of the best work gets done and should be encouraged as much as possible. It can lead to dodgy results, like Neal Adams’ recent unfortunate Bat-comics, but this is the area where things like The Dark Knight Returns and Killing Joke come from.

Batman Inc felt so unnecessary after the Return of Bruce Wayne, but has become more essential as other Bat-comics return to their comfortable chairs. It’s hard to follow its pace sometime, but it will wait for you to catch up.
Posted by Bob Temuka at 2:48 PM