"Armageddon some more of that!": Nine things I learned after buying a painfully heavy load of cheap comics from the $1 and $2 bins at this year’s Armageddon comic convention in Auckland, New Zealand. 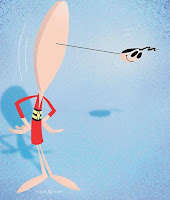 1. It’s brilliant when Baker breaks it down.

Kyle Baker’s art in his Plastic Man comic started to look awfully rushed in the last year of the title, but it works. There are a couple of issues where it’s just cartoony madness, but since the story is about a things like a big, bad superhero who can change into anything chasing after a totally anthropomorphic mouse, it’s a fitting breakdown in Baker’s line.

When he returns to that beautiful heavily textured work in the last couple of epic issues, it’s actually slightly disappointing.

2. The cheaper it is, the funnier it is

Bristle #10 – the latest collection of comics from a pretty damn good Kiwi comics collective – is the funniest issue of the anthology series so far. It’s always nice to see mini-comics that don’t go too far up their own arses, and Bristle has a healthy sense of absurd humour that suits the low-fi format perfectly.

Whether it’s the glee of a happy chicken tucking into a plate of roast turkey, or an overload of fantasy joy leading to somebody spewing rainbows, it’s fucking funny stuff.

My favourite cartoon is a strip by Grant Buist featuring nothing but 16 ‘Awful Flatmates’, from ‘Believes housework is beneath him because he goes to university’ to ‘Extremely boring when drunk. Often drunk’.

I thought it was really funny because I had lived with a good dozen of these people, and then it wasn’t so funny, because I realized I’d been some of those awful flatmates in the past.

Now I just feel really guilty about the massive fry-ups of my youth…. 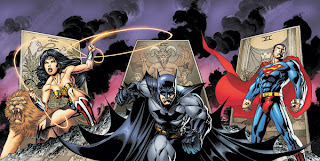 3. I still love you, super-heroes.

I… I actually quite liked Busiek and Bagley’s Trinity comic….

I went to this year’s Armageddon convention on the first day, which was on a Friday for the first time. They didn’t have any guests, but it was much cheaper to get in, and I was only interested in the comics.

I only went to my first comic convention five years ago, after dreaming of doing so for literally decades. I’ve been to a few more since then, and while I have never been to one outside of New Zealand, I have never been disappointed by one. I don’t care who the guests are, or what video games they are showing off, or anything else.

I just want the comics.

And I got loads on that Friday: Obligatory issues of Shade The Changing Man and Cerebus, some Giant-sized chills and kung-fu, the last issue of that Hedge Knight mini I was after, Richard Corben horror comics, more Lobo than is healthy, the issue of Kamandi where he turns into OMAC, and Marvel Tales #4 in a beautifully atrocious condition.

So I was happy with all that, but I couldn’t think about all those modern and glossy superhero comics that I’d left behind. I’ve still got a lot of affection for bright and shiny new superhero comics, so I went back to the convention on the Sunday and bought heaps of it.

I got three-quarters of the Trinity series, and a bunch of Whedon/Cassady X-Men, and loads of recent Ultimate comics, and man, did that scratch that superhero itch.

Especially when they all turned out to be much better than expected. The Ultimate comics now each cost almost ten bucks in local money, so I’d fallen out of touch with the entire line, but walking away with twenty recent issues for the price of two new ones was hard to avoid. I loaded up on the Ultimate, and found some unexpected gems, including one by a writer who had got so bad I’d written him off entirely. (More on this soon.)

I also really enjoyed the Trinity stuff more than I expected, largely because I genuinely adore Bagley’s slick line and partly because it was far better than the bland uniformity of 52 or the sheer awfulness of Countdown), and I will buy any comic John Cassady does, X or not.

The point is that despite all my pretensions towards the pursuit of great art in comic books, sometimes I just want to smother myself in glossy new superheroes, and I don’t feel guilty about that at all. 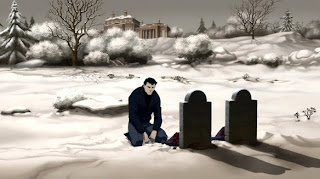 4. Now I just keep thinking about how he’s pissing his pants.

Actually, there was one other benefit of going on the Friday other than the comics – I got to watch the Batman: Year One animated film on a big screen with an audience of people who all laughed and cheered at the right spots. That was fun too. 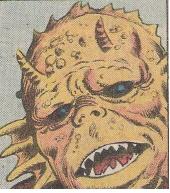 5. “I’ve known the innocence of youth, the warmth of a loving family, the grief of the… last goodbye…”

I always thought that early eighties issues of Marvel Team-Up, with Herb Trimpe’s most half-assed Romita licks, were the ultimate example of average comics – not offensive or exciting in any way. But then I saw some of them were written by JM DeMatteis, who has a habit of slipping interesting ideas into the most prosaic of comics, so I gave them a go.

I also needed to grab another dozen comics to make up some numbers for a good deal, and half a dozen thirty-year-old MTUs were ample ballast.

And they were all right, with a surprising amount of inter-issue continuity, a whole series of events barely acknowledged in the other Spider-titles, as the lowly status of the team-up book allowing the creators to take it to some slightly interesting places.

But there is also the DeMatteis touch, with light (but strong) touches of real emotion in amongst the wall-crawling. One team-up with the Gargoyle is a stand-out, turning into a genuinely touching piece about the dignity of growing old. 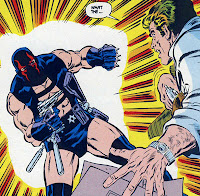 6. The Beast was badass

I finally got to read all four parts of Batman: Ten Nights of the Beast, from Jim Starlin and the great Jim Aparo, and it’s still an effective story. Even if it’s impossible to take KGBeast seriously any more.

After two decades of overuse, to see the KGBeast as a genuine threat to Batman in the eighties story is a little startling. It doesn’t take long in this story for Batman to realise that the KGBeast is actually better than him at this running, jumping and fighting thing, but now he would barely bat-blink before taking the Beast down painfully.

But I like the fact that Batman is driven by a deep-seated sense of protecting the innocent and preventing the sort of tragedy that ripped his life apart, while Ten Nights of the Beast implies that the KGBeast will always lose, because he doesn’t care about things like that and his own nihilism will ultimately be his downfall.

The Beast has become crowd cannon fodder over the years, but he did once push Batman as far as he could go, and that’s still a story worth reading.
***

7. One issue is enough

I also loaded up on a small pile of Peter Milligan’s current run on Hellblazer, which might be the best run of John Constantine since Garth Ennis moved on, with a terrifically modern sense of street-level magic depicted in some energetic and slightly perverted artwork, (including some gloriously muddy work from the great Bisley).

These comics have got Shade: The Changing Man, John’s wedding and a couple of trips back to the grim and grimy seventies. They’re fucking fantastic.

I got about a dozen issues, and there are maybe two or three that are in some kind of consecutive order. Milligan has racked up an impressive amount of issues in the past couple of years, and I’ve now got a scattering of them.

It makes for a frustrating reading experience that can also be rewarding. Anybody who has grown up reading comics knows they couldn’t always rely on reading every issue in a particular storyline in the proper order. It’s easier since the proliferation of trades, but most of the comics I’ve been devouring have been read out of order since I was 15 (and I haven’t finished yet).

Both John Constantine and Peter Milligan lent themselves well to the old cut-up technique, and offer new revelations when read in an utterly non-linear fashion. If each individual issue is interesting enough in its own right – and every issue of Milligan’s Hellblazer I’ve read so far has had something unique – it doesn’t if the overall story doesn’t make sense. It will one day.

Ed Brubaker and Colin Wilson’s Point Blank is a brilliant comic, kicking off that whole wonderful Sleeper thing with a dose of intense super-paranoia and lively action art.

It's especially satisfying to read something that isn't afraid to use the way grim and gritty comics are told for narrative effect. With the use of unreliable narration and things happening in the gutter between the panels, the story creates entire mysteries in scenes of people walking out of toilets, and odd moments of confusion are later shown to contain devastating revelations.

If all comics had this much thought and energy bit into them, we'd have nothing to complain about. 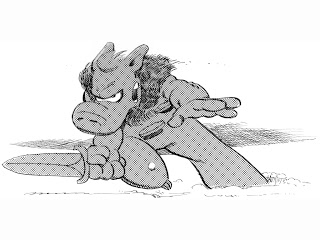 9. Don't encourage him.
I always thought the mysgonistic tipping point for Cerebus The Aardvark came when Dave Sim launched into Reads, and the infamous #186. (The first issue I ever read – it took a long, long time to get past that.)

But now I’ve got a few more Jaka’s story and Melmoth issues and the general concern over Sim’s attitude towards women is obvious at a much earlier period.

In fact, there is an oddly mean letter from Michael Moorcock printed in #147 that shows this. While Moorcock – who has always been one of my favourite writers in any medium – does undercut his point slightly that insisting that in 1991, Lord Horror was the only comic worth reading, he cuts right to the point, calling Sim a ‘self impressed misogynist with an exageraated idea of his own intellect’.

Sim gleefully printed the whole thing on the opening Notes From The President page of #147, and takes even more joy in cutting Morrcock's points into slices of raw inconsequence.

It's all classic Dave, and he makes a few good points, but twenty years later, it's this line that really stands out:

Sim spent the next two decades willfully offending large sections of his readership, unconcerned by those who started labelling him various nasty things.

If ever there was a character that deserved to be left to rest in peace, it was the KGBeast.