You’re not supposed to compare apples and oranges, but I do like apples more.

I also think some of Norwegian artist Jason’s work is masterful comics, with a brevity and wit that gives his storytelling universal appeal, while the latest collection of Iron Man comics that I got to read was fuckin’ rubbish 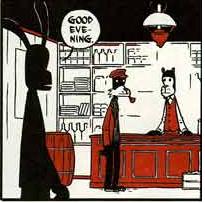 On a recent Sunday afternoon, I read a bunch of comic books in a (not entirely successful) bid to calm Rugby World Cup-shredded nerves. Rugby is my sport, I’m allowed to be nervous.

Most of them were from the local library, and some were pretty good. It can take me a while to catch up on things, but it’s easy enough to follow work like Peter Milligan’s currently excellent Hellblazer comics, or a bunch of different superhero titles for free from the local.

The latest round of Captain America and Spider-Man trade paperbacks were both entirely enjoyable (if incomplete), I really liked Bone Sharps, Cowboys, & Thunder Lizards and while Flash: Rebirth and Superman: Grounded were both better than I actually expected, I had the lowest of all expectations in the first place, so that wasn’t saying much.

But the biggest contrast came between What I Did by Jason, and Iron Man: Stark Resilient volume one by Matt Fraction and Salvador Larroca. One of them was a charming and entertaining read that managed to touch on some universally human themes, while the other was a turgid and sneering comic that looked shiny and didn’t go anywhere.

Guess which one was which?

I feel like I’m being unduly harsh on the Iron Man book because I read it in such close proximity to the Jason comic and Jason’s stuff is Always Good. But it killed any interest I had in the current Iron Man comic stone dead, and I won’t be bothering with it any more.

It didn’t even cost me anything, I’ve been eagerly getting it for the library, waiting for it to get good. There was plenty of potential, but it was largely unfulfilled, and it’s taking too long. I just can’t be bothered keeping track of it any more, and I left volume two of Stark Resilient on the shelf just yesterday.

I think my last interest vanished somewhere about the ninth time a bunch of characters all stood around talking about the same things, over and over again. It’s not just that they’re saying the same old shit, or have substituted snarky sarcasm for actual human conversation, it’s just got dullness built into the foundation of the page

And it’s not just that Larroca has now carefully erased all vigour out of his artistic line, and draws everybody like they just escaped from the set of Westworld. It’s the way the whole thing is paced out. It is the long and drawn out sequences that go nowhere, acted out by things that don’t look like proper humans.

But most of all, it’s these bloody inexplicable widescreen panels that serve no purpose:

What is going on here with all this empty nothingness?

Who thought this was a good idea to leave vast amounts of the page useless?

Who thought it should go on for page after page like this, stacking up panels like they are cumbersome pieces of timber: 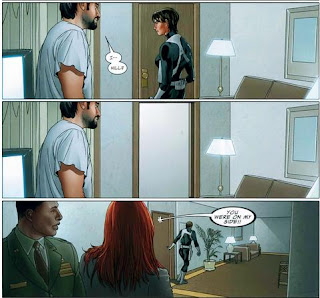 There are pages and pages of this, with stacks of widescreen panels with a whole lot of nothing on either side. Individual panels that are just huge wastes of space, especially when they seem to rely on portraying an intricate piece of human emotion, and totally fail to do so.

Leave aside those freaky mannequin arms which seem to be springing from some different person entirely, there is that space on either side of the panel, that endless dull wall of nothin’ much. It’s going for mood, but it just comes off as boring and stale

They should start putting advertising there. At least it’s something. Look! There is heaps of room, as I have proven with my tremendous MS Paint skillz:

It took me ages to get through this comic, and this dedication to boring did not help. And when things ended with another non-ending, and even more doses of fuck-all, that was enough to say no more.

Then I read a Jason book and I felt much better about comics again. 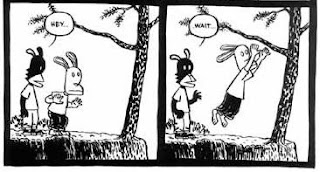 I’m so glad that Jason is ridiculously prolific, but there seems to be a new book by the Norwegian cartoonist every second time I go to the library, and I devour each one (and go on to buy a few more).

What I Did is a collection of some of his earlier works, and I’ve already got Hey Wait sitting on the bookshelf like all right-thinking people do. But it also has ‘Shhh’ - one of his silent stories, that hovers on the edge of a dream without any possibility of waking up; and The Iron Wagon - a straight adaption of a strange and spooky little novel from the turn of last century.

As always, Jason’s anthropomorphic characters are fill of silent pain and dignity, maintaining straight backs as their heads spin off into delirium. His sense of comic timing is unparalleled in modern comics, and while his pacing often appears languid, there is a lot going on beneath that stiff surface. 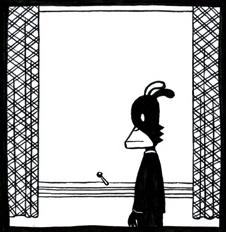 So I know I shouldn’t compare the two, but after the thoroughly depressing widescreen of Iron Man, Jason’s work was a good and timely reminder of everything that is great about comics – telling tiny little epics in four panels: 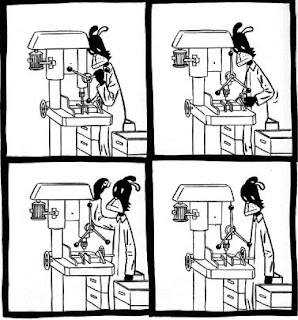 Or sliding around on angles to give the perfect perspective and some terrific tension on a small and important event. (particularly tasty after the endless medium close-ups that plagued Iron Man, even in the action scenes): 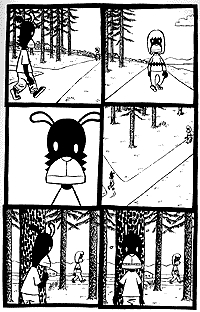 It’s really great comics, and insanely readable. While the Iron Man book took me ages to get through, I blew through What I Did in no time at all, in the best possible way.

I’m still old enough and dorky enough to remember the endless Iron Man vs X-Men debate that raged in Wizard for years, but this is much easier. Jason v Iron Man? 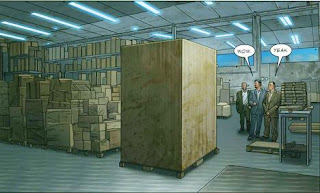 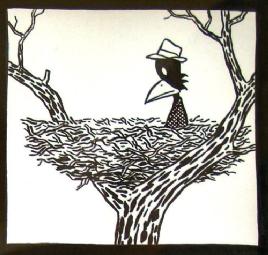 I find it curious that it took you longer to read through Iron man than Jason's comic book, which appears denser. I'd have expected the opposite, with all that empty space and one line per panel.

I wonder who's to blame for this? The writer or the artist? I think it's the writer; I suspect most of those guys no longer care about writing panel descriptions and pointing out angles and perspective - they just write "Tony Start and two dues are standing in the middle of a rom" and just leave the design to the artist. And people being lazy, the artist will go for the laziest angle possible - medium shots and bland backgrounds. If the writer doesn't tell him WHAT to fill the background with, the artist is being paid to come up with it. He's not the one writing the story.

That's my opinion - it's indeed an annoying trend and I think it's mainstream comics horrible.

Hi Bob great piece. Linked to this site from here: