This is why I do it

Sometimes I can’t think of anything to say on this blog, and that’s when it really starts to feel a bit pointless. I’ve been posting fairly regularly at this blog for almost three years, and more often than I would like, I end up sitting here at two in the morning, wondering what the fuck I’m talking about.

But I still do it, because I love talking about comic books and movies and novels and other narratives that I’ve enjoyed. Like everybody else, I also like to have a good moan, especially when something I genuinely love, like the modern American superhero comic, is so lacking in basic craft that it’s downright offensive.

And it’s even more fun to talk about something I really loved. It’s harder sometimes, to put that feeling of affection and contentment that comes with a good story into words, instead of just slagging something off, but it’s always worth it when somebody says they love the same shit I do.

But there is another reason, and it’s loads more selfish. One of the great benefits of writing a blog is that every now and then, you get a package in the mail that contains something like this: 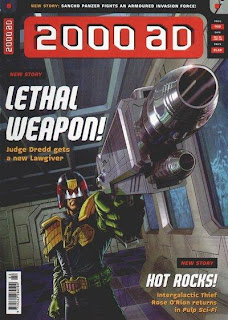 It might look like a random issue of a fairly recent 2000ad, but it’s not entirely random – it’s one of sixteen issues I need to complete a colossal run in my collection. I’ve now got a complete run from prog 107 to 1366 – a run of 1259 consecutive issues. I am inordinately excited about all of this. 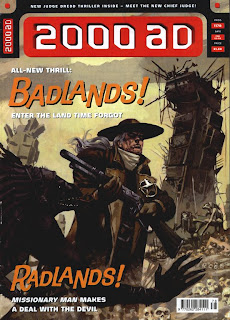 This is how a decade-long obsession starts: In 2001 I finish up another prog slog – reading every single issue of 2000ad I own in one go. It ends fairly apruptly with #950, because I quit reading the comic in the mid nineties, largely due to a dire drop in story quality.

But half a decade after they had been published, the few post-950 issues I had didn’t look quite so ugly anymore, and there was this Judge Dredd storyline called The Pit that looked fascinating, and I didn’t know it at the time, but I was hooked again.

I picked up a few more issues over the next couple of years, but didn’t start buying 2000ad every week again until 2004, and by then I had eight years to catch up on. And I had to catch up – I was totally obsessed with the latest twists and turns in the Judge Dredd saga, adored Nikolai Dante and loved the slick art and stories on dozens and dozens of other strips.

But man, eight years of a weekly comic. That’s four hundred issues. This was going to take some work.

Well, it’s not really work, because it’s so much fucking fun: buying more than a hundred circa-1999 issues from a Sydney second hand bookshop over one week in 2005, finding that one issue with the Shaun of the Dead comic in it in Jim Hanley’s store beside the  Empire State Building, innumerable TradeMe surprises and a terrific weekend in Dunedin watching Mulholland Drive after buying the last of the pre-1000 issues I needed.

I love this shit so hard. 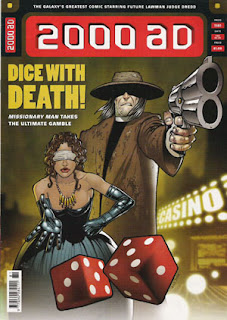 This is how a decade-long obsession ends (or reaches a significant milestone, at least): a couple of weeks back, I get a lovely e-mail from the UK from somebody called Ben, who runs a terrific Grant Morrison site and wants to ask me a favour. He read my review of an obscure British charity comic from the mid-eighties, and he is dying to get a copy for its early Morrison goodness, but keeps getting beaten to the punch by Alan Moore completists who want it for the Bryan Talbolt-illustrated dinosaur story.

He’s so keen, it would be a crime not to get it to him. But I’m selfish enough to admit that when he offers me something wonderful for it, I can’t refuse.

He’s willing to pay a silly amount of money for it, but I’m not bothered by that. But then he offers to get me some of the missing 2000ads I need – they are plentiful in his parts, and he is more than willing to swap a small pile of them for the much-needed Food for Thought.

The deal is done – Ben gets his comic, I get my 2000ads, and we’ve both done well out of our obsessions. 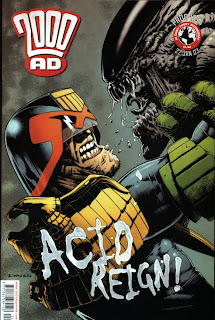 In the past couple of weeks, post-travel blues means I’ve been buying more crap over the internet than I usually do, and ended up with issues of Jack Kirby’s 2001, and Justice League cartoon DVDs and the new edition of Kim Newman’s extraordinary Nightmare Movies, and that one bloody issue of Batman:Year One I’ve been after forever, and a beautifully chunky DVD collection of Video Nasties, all coming through my letterbox.

But the most exciting package was the 2000ads. Opening that one when it finally arrived generated a sense of enormous well-being. Dork life! 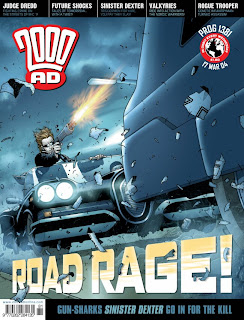 So I’ve got this monstrous beast of a collection now, but I’m far from done. There is still loads more to get – big chunks of the Judge Dredd Megazine, a small fortune in pre-100 issues and several annuals from the 1980s that I’ve never seen anywhere.

But I’ve almost completely filled that gaping hole when I lost faith in Tharg, and it’s a terrific feeling, and all the incentive in the world to keep on blogging. It’s great to talk about stuff I like, but getting something substantial and real out of it is even better.

Glad to be of assistance Bob, and wish I could articulate as eloquently my excitement at getting the Food for Thought issue!

Keep up the good work. I'm sure you don't want a comment at the end of every one of your posts saying 'Hey, I feel like that too..." but that's how it is. I look forward to a long series of posts covering the next re-read...

All the best chief!