A month at the movies #6: Dunkirk 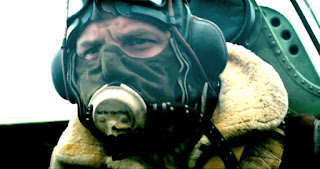 Tom Hardy is a phenomenal acting talent. He has a formidable physical presence, can contribute a deeply impressive vocal performance and has the dreamiest eyes in modern cinema.

Those eyes often get put to good use, with several roles that have required him to cover up most of his face. Christopher Nolan knows this better than anybody, and after using Hardy to give the Bane character an actual personality in one of his Batman films, he slaps another mask over those gorgeous features for most of Dunkirk.

And Hardy still manages to sell one of the film's best moments, when all he's got to work with is a close-up of that masked face. It's when his Spitfire pilot finally reaches the point of no return, and has to turn back if he's going to save his plane, even though it will undoubtedly cost the lives of some of the desperate men down below.

It's fucking magnificent - he goes through a full range of emotions in the few seconds he has to consider his dilemma, from uncertainty to worry to full-on fear, and then, without a word, you can see the exact moment he makes his decision. There is no more second guessing, no more fear, and he just gets on with the job. There is no use worrying about it anymore, once that decision has been made, and his eyes turn to steel as he soldiers on.

One of the best things about Dunkirk is that so much of the cast are really bloody young, reflecting the actual ages of the poor bastards who were trapped on that endless beach. But nobody else could have done what Tom Hardy does in that brief moment, where his eyes do all the talking.
Posted by Bob Temuka at 6:27 PM