Murray Ball - arguably the greatest cartoonist New Zealand ever produced - has gone on up to the big back paddock in the sky, passing away this week at the age of 79.

These are some words I wrote a couple of years ago about Ball and his fantastic, brilliant and charming Footrot Flats. Ball was a deadset legend, and his comics will never be forgotten.


Footrot Flats is the story of a dog and his mate, down on a farm at the arse end of the world in a strip by farmer Murray Ball that lasted between 1975 and 1994. Over those years, it was a hugely popular daily comic strip, spawning all sorts of spin-offs, including a pretty decent movie and a dodgy-sounding theme park at its heights.

Footrot Flats was in every newspaper in the country, and everybody loved it – I bonded with my paternal Nana over Footrot Flats as a kid, and I remember how excited we both were by the prospect of an actual movie.

It was the first New Zealand comic strip to reach that kind of mass appeal in its home territory, and nothing has come close since. (While there are plenty of fine cartoonists in Aotearoa, local newspapers inevitably choose safe comics from overseas, like Zits, or Hagar The Horrible, or Garfield). 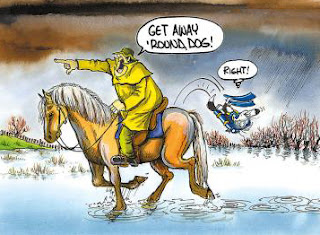 And that popularity was deserved, because it was a rich strip from a simpler, less media-saturated time. It did romanticise the rural lifestyle, but never hid the dirt and filth of the farmyard. Ball, who lived the life he drew about, could get into devilish detail on a rotting goat’s carcass, or a steaming pile of rank manure – everyday sights for the farmer, but endearingly shocking to everybody else.

You could smell the silage in the ink, and that gave the strip a raw, sketchy vitality It was also wildly popular because the characters were so recognisable, (at least in NZ). There was the upright farmer, the hippie neighbour, the cheeky hussy, the stern Aunt and the pampered pet. And there was the Dog. 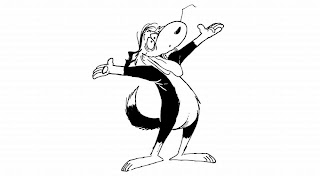 While there was no shortage of weird and wonderful characters wandering in and out of the farm gates, the Dog was undoubtedly the central character, and this was Ball's best move. He didn't even have a name - except for the terrible, and never-spoken, one given to him by Aunt Dolly - but had plenty of personality, and was one of the few animal characters to freely roam the fields and comment on all the action.

Ball’s line gave characters like the Dog a mix of heavy realism and goofy cartooning. Dog was a little more anthropomorphic that Snoopy, but not much more, and was, first and foremost, a dog: endearingly innocent and unflinchingly loyal. He was confused about many things in life - like why the humans took such great pleasure in using their bats to smack the crap out of cricket balls - but was also in tune with the never-ending cycle of life and death that exists in the rural world.

The secondary characters, like the feisty feral cat named Horse (who was easily the toughest thing on the farm), or Coochie (the pragmatic pacifist who loved all life and couldn't even cut down a tree growing through his front room), were often funnier, and a source of more punchlines, than the Dog, but he was the heart and soul of the strip, just as any good farm dog is the heart and soul of the farm. 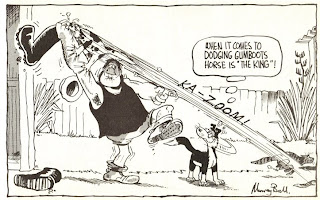 And Ball's art was also full of soul, because it was vivid, and sharp, and fast, and very, very funny. He could find laughs in gross-out humour, or in a look of desperate pleading. His characters often looked like they were having a good time, and there was something eternally funny in the way he would have figures stalking about in the far distance, (which is oddly reminiscent of the work of British cartoonist Giles, another youthful favourite)

Like all good comic strips, Footrot Flats dealt with the big issues of life in four panels of patter and slapstick. Universal themes led to universal truths and the strip was firmly in favour of anybody who stood up to the bullies and arseholes in life. There was humour in adversity and straight-up silliness, but greed, pride and foolishness were always punished, sometimes with the help of an electric fence or the righteous fury of Horse.

But the philosophical musings on life - watching the sun go down over the fields and asking 'what's it all about?' - were never at the expense of a good comic punchline or deadpan reveal. It was a genuinely funny strip that sometimes made big points about the meaning of life, and you couldn't ask for more.

Like Peanuts, politics also never got in the way of a good laugh, either. Ball was a fairly classic rural liberal socialist, and his thoughts on feminism and environmentalism became more prevalent as the strip went on. But it was also a world where the All Blacks selector was infinitely more powerful than the Prime Minister.

The strip was most popular during the Muldoon and Lange years, where New Zealand fought itself over apartheid and told the US to stuff off with its nuclear vessels, but there was barely a hint of all that in the strip (and when it was dealt with, it was always at its most oblique, and in favour of things like common sense and not-being-a-dick).

There were plenty of life lessons in Footrot Flats. They weren't always that obvious, and sometimes they were a bit too obvious, but they were there.


I always associated Footrot Flats with Christmas growing up, because it was Christmas Day when we often visited relatives who lived on farms, and because I’d usually get some kind of Footrot Flats books as a gift, usually from Nana Smith.

And I loved them, and I devoured all of them that came my way. After the barbeque, and before the early evening swim down the Opihi river, it was always Footrot Flats time, and even though the strip finished years ago, it still is.

It's the perfect comic for a time of peace on earth, and goodwill to all men. Even those bloody Murphys and their bloody pigs...
Posted by Bob Temuka at 3:00 PM