All the political uncertainty and undisguised hatred of Planet Trump, on top of the usual fear and loathing of the modern age, has been getting a bit much lately, so I tried to get away from this mundane world for a while by giving the Batman Versus Superman: Dawn Of Glowering movie another shot.

Because no matter how grim and gritty this real world actually gets, some Batman usually helps. Batman stories are iconoclastic escapism at their very best, and the sight of Bruce Wayne stomping on some punk's head usually lifts the spirits.

He didn't help this time, because of all the murdering he did. I know it's already a cliche, but I just can't get past the murdering. Because Batman doesn't kill. 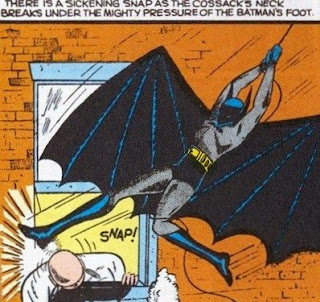 The recent release of the extended version of this movie put to rest any fears that it was unfairly treated on its initial release. Even with the story heavily padded out with all those extraneous details, it was still total bullshit.

There were just so many levels of dumbness to the film, and it was a tonal mess from start to finish, and the biggest example of the stupidity of it all was the sight of Batman casually killing all the punks that got in his way. The filmmaker’s argument that these unfortunate henchmen were all victims of their own weaponry was a little undone by the fact that Batman was still shooting at them with bloody big machine guns.

The Batman concept is open to a wide variety of interpretations – you can tell gritty, street-level noir tales, or ripping science-fiction at the far edge of the universe. But having him kill people isn’t just another interpretation of that vision, it is a fundamental misunderstanding of the whole damn concept, a terrible failure of imagination and little more than a dumb kid’s idea of cool.

Batman is better than you. It’s a hard fact to face up to, but things will go a lot easier for everybody if we just acknowledge this from the start. Batman is a better person than you can ever be – he’s stronger, tougher and has superhuman levels of emotional depth.

And the fact that he doesn’t kill is another part of it. He might maim and cripple the very worst rapists and murderers, but he still takes that moral high ground, and never passes the ultimate sentence. When you dress up as a flying rodent, it's hard to pull off that kind of moral authority, but one of the great things about fictional characters like Batman is that they ares always on the verge of utter fascism, but never quite step over the line, and judging who lives and who dies is a step far too far.

Besides, he can always think of a better way - mindless slaughter of the bad guys is the most boring solution to the problem, with no imagination, and no charm. Outsmarting the villains is always more fun than that. 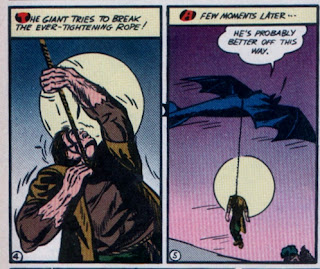 After all, Batman is fictional as fuck. Death is horrifically permanent in the world we live in, and really is the ultimate awful silencer and punishment, but it almost means nothing in the revolving-door afterlife of the DC universe, where any character can be easily brought back to life. With the endless rebooting of this universe, they don't even have to come up with an excuse - long-dead characters can just reappear in a new skin after a few years.

But Batman is a logical creature, and knows that killing people won't get him very far, not in a fictional universe where the afterlife is an indisputable fact. He has hung out with the Phantom Stranger enough to figure that shit out.

If the Bat ever snapped, and ripped Joker's heart out, he's just sending that twisted, sick soul straight to hell, where he's just going to come back with demonic powers, and devilish allies. That's not going to help anybody.

Death is not the same final sanction it is here in the real world, and applying that logic to the worlds of magic lassos and power rings is just dumb. Even if your morals are as hard as Sgt Rock, there is just no argument for it. 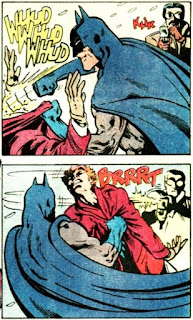 A hardcore Batman, slicing down his enemies with vicious mercilessness, is little more than a 12-year-old’s idea of what’s cool. I know, because I was a snotty 12-year-old once, and I wanted my Batman to be the meanest, toughest Batman ever, and glorified in his casual attitude to death.

When #572 of Detective Comics came out in 1987, it was a big 50th anniversary issue, involving some wacky Sherlock Holmes-inspired adventures. And in one of the opening scenes, in a lovely Alan Davis drawn sequence, Batman and Robin lay into some scum with their usual gusto, and then someone pulls a machine gun, but Batman is okay, because he shoves the goon he is pounding in the way, to take the bullets for him.

I still remember being super-impressed as an adolescent, because I was sure this showed that these things weren't for kids any more. They were for me! They were serious business.

Now it just feels horribly callous and unimaginative, and more than just a little sadistic. I still wonder about that poor fucker who died to show what a badass eighties Batman was. How many orphans has he created this way, how much longer can he spin out the cycle of violence without even trying rehabilitation. We should be better than that. Batman certainly should be better than that. 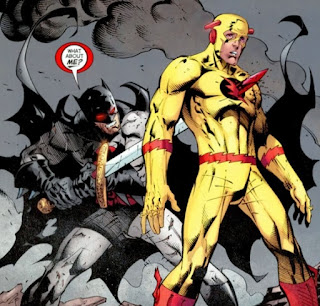 Still, outside of the grimmest of '80s Bat-adventures, and the flexibility of Elseworlds or other imaginary stories, the Batman of the comics has usually maintained that strict moral code, always trying to do the right thing when it comes to the sanctity of life.

We're totally ignoring all the bloodthirstiness of the first couple of years of Batman adventures all the way back in the Golden Age, when he was snapping necks and dropping people in acid, because he still wasn't quite Batman yet. It took a while for the comics to truly, properly define the character, it always does, something superhero films always forget.

In the movies, where they keep expecting characters to emerge fully-formed after one origin adventure, it's been a bit more inconsistent. While the excellent Adam West's Batman wouldn't even harm some cute ducks in his movie debut, the Bat-movies of the late eighties and nineties thought nothing of portraying Batman letting hired goons fall to their deaths, or straight-up exploding them to death.

Refreshingly, the Nolan films bucked this trend, (even if Bats really could have saved Ras at the end of the first one). But that moral certainty of Batman the whole goddamn point of The Dark Knight, and the grimmest, darkest and most serious Bat-film ever was still built around the Joker trying to get Batman to snap and take his life, and failing utterly - the only time he actually sounds like he's laughing with real joy is when he is apparently thrown to his doom in the climax. 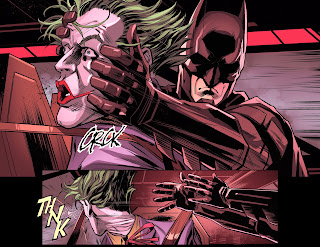 And then there is the latest incarnation, in the latest and loud movie adventure. Ben Affleck actually makes a terrific Batman when he isn't breaking necks and blowing up flamethrowers.

But the callous disregard for human life doesn't even make sense of the context of the film - when you’re supposed to be shocked by the Bat’s ruthlessness in the ham-fisted dream sequence of an apokalyptic future, it means nothing. The tone is all shouting in an effort to look cool, in both the real world and dreams. Batman uses high explosive weaponry to straight-up murder the mercenaries he is fighting in the present days, so it means nothing when he starts shooting people in the face in the prophetic shit. 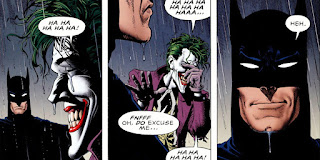 I can't really blame the movie studios for trying so hard to please 12-year-old boys at the expense of everybody else, because they are fucking stupid and easy to please with false macho bullshit, with no deeper meaning than 'look how hardcore the Bat is', and they are a significant portion of the total audience.

But Batman is better than that, and a good Bat-story is pure escapism. And we could all use some escapism right now. We could all use a Batman to stomp all the bullshit out of our lives, we just don't need him to stomp the life out of our bullshit.
Posted by Bob Temuka at 5:22 PM