Darwyn Cooke: Comics with a lust for life


The sudden passing of Darwyn Cooke late last week was both shocking and unexpected. He was only 53, and had so much more cool shit to do.

As untimely as it is, he leaves behind a thunderingly good body of work in the fields of comic books and animation. His art and stories were always so vibrant and energetic, and he brought a slick professionalism to everything he touched. His death is a great loss to the medium, and to the world. 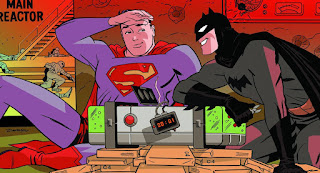 It’s even more impressive when you consider it was all in the past decade and a half. After a successful career in animation, producing beautiful work for Batman and Superman cartoons, Batman: Ego was published in January 2000, and was a proper calling card for Cooke's skill. It was so accomplished and confident, it hardly felt like somebody's first major work, and heralded a major new talent for comic art in the 21st century.

And with his retro-modern style and smooth, slashing line, Cooke accomplished more in those 15 years than some artists managed in five decades. He produced sharp, provocative works like the magnificent Parker adaptions, and was one of the very few artists to get away with doing new Spirit and Watchmen comics without embarrassing himself. 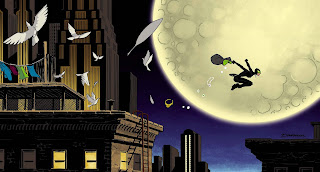 His design for Catwoman was immortal, both in its practicality and its respect for the female form. He was always welcome on comics like Jonah Hex and would often turn out short, one-off stories that were just as stylish and substantial as any of his longer works -  he was one of the undoubted stars of the Solo project.

Cooke's most recent work - The Twilight Children - was written by Beto Hernandez, and the freedom to just focus on the art gave the whole book a smooth, moody flow. He always made it look so easy, which was the hardest part of all.

He produced dozens of covers, which were always uniformly magnificent - the collection of variant covers he recently did for DC as part of a month of Cooke covers were well-designed, beautifully posed and funny as hell, telling tiny little stories about these heroes in a perfectly captured snapshot. 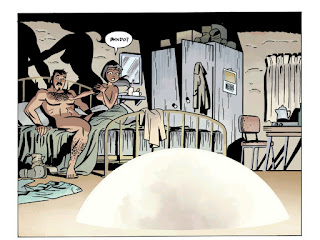 Naming one of his works as his best could be a foolhardy effort, but there is no doubt that his New Frontier series, featuring the adventures of the DC heroes in a sparkling 1960s with hidden depths of despair, is up there.  Any excuse to re-read New Frontier is usually welcome, and while Cooke's death is the worst possible reason, it's still worth going back to that universe again.

Because it's so smart, and so optimistic, while never shying away from the darkness. Anything in the world is possible, but there are problems down south that threaten to drag the new era down. Cooke's thematically rich comic combats the brutality with his new wave of heroes - J'Onn J'Onnz brings the humanity, Green Lantern bring the enthusiastic idealism, and everyone else brings guts and glory to the story.

It's a supremely confident work, and again, slightly astonishing that he was only a short way into his career as a full-time comic book artist. It's self-assured, awesomely well paced and has action scenes that are graceful and flowing - even the plot brings together a bewildering range of characters into a coherent drive. And Cooke's panels were always so well put together, with his clean, open style making maximum use of the available space.

Going back to New Frontier, more than a decade after it was published, there are sequences that still take the breath away with their sheer dynamic flow - the Challengers if the Unknown ruling the skies in a desperate rescue attempt, the Martian Manhunter's discovery of human culture through the boob tube, Green Lantern taking to the skies properly for the first time, The Flash getting a little sugar on his way to an ice-cold smackdown in the desert. It's outstanding comics. 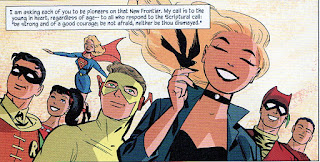 It's not even tainted by the sheer tragedy of Cooke's untimely passing, because there is such a lust for life in New frontier. There is acknowledgement of the danger in forging new paths for the world, but it’s also a story that is powered by the joy of life and the thrill of discovery.

And in New Frontier there is also the quiet satisfaction of an artist producing his best work at the top of his game, and we should all hope to produce something as moving and funny and exciting as this comic.

And reading it this week, in the wake of the terrible news, it's even been a little comforting with the way it treats death, because there is nothing to be afraid of here. 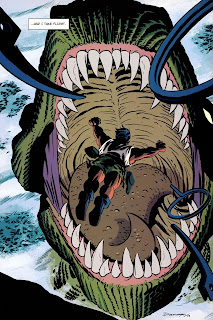 Characters still die in New Frontier, there is plenty of carnage and bloodshed, and a large part of the story is kicked off by the horrific death of four people who fall from a building while chasing Hourman. But just as the comic acknowledges the dark side of the American dream with John Henry, it recognizes that some things always die at the dawn of a new age, and it’s just another part of life.

In New Frontier, there is the beautiful, and still moving, way many of the doomed characters all accept their fate. Johnny Cloud takes flight and happily leaps to the jaws of a dinosaur with grenades in his hands; a member of the Suicide Squad reaches his demise at the beak of another dinosaur and finds, joyously, that there is nothing left to fear; and Rick Flagg and Karin Grace die in each other’s arms, in a nuclear inferno on the edge of space.

Any new world is built on the ashes of the old, and with the unprecedented amount of change in post-war America, there were always going to be some poor souls left behind. We should mourn them, but we shouldn't let their loss overshadow their mighty achievements. 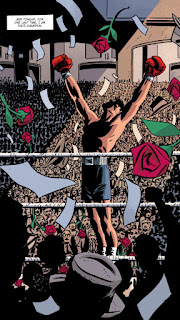 I never came close to meeting Darwyn Cooke, or in interacting with him in any was except as a reader, but I feel privileged to have enjoyed his comics. They have been a pure joy, in all their forms.

And while I can’t claim to know him, I can only hope he reached the end of his life with the calm determination he always displayed in his comics. And I hope he knew how they could be so inspiring and human. He deserved all the accolades he received, and more.
Posted by Bob Temuka at 8:45 PM