What is best in comics?


Somebody recently asked me what the best comics were. They were another new reader who had devoured the Walking Dead books, after getting hooked on the TV show, and they were looking for more.

But they only wanted the best comics. They had no time to waste, and wanted to get straight to the best stuff. They just wanted the greatest comic books ever.

Even before getting into the whole personal taste thing, my brain totally locked the fuck up, and I couldn't come up with a coherent answer. I said it's a bloody complicated question. I said I would have to go think about it. I said I might have to write it down. 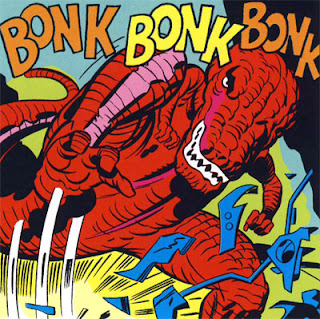 The best comics are stylish and beautiful, with design that pops off the printed page, and smooth, flowing storytelling.

There are infinite possibilities on the comic canvas, eternal potential in a few lines on a blank page, and the best comics are by true artists whose work is undeniably beautiful. Artists who show us how they see the world, and produce gorgeous images that sear into your soul. Unique talents, unique eyes, unique ways of seeing the world, all expressed through the medium of comics.

Artists like Kirby and Bolland and Tezuka and Mignola and Moebius and Kubert and a thousand others. Artists that knock you on your arse, and make the world a little bit more beautiful. 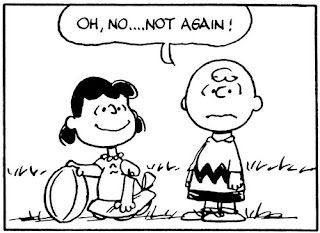 Superheroes are easy – comedy is hard, but the comic world is full of great grins and laffs. It can be the starkly dark humour of Warren Ellis or Garth Ennis at their best, always bouncing up against starkly dark truths, and it can be can be silly comics, with universal themes found in the goofiest crap.

You can see more about the human condition in Blue Beetle's bwa-ha-has, or in Charlie Brown always missing the football, or in the insecure brilliance of an Evan Dorkin strip, or in the sophisticated anarchy of a Kurtzman comic, than you'll ever seen in a thousand angst-ridden blockbuster comics.

The best comics are clever, full of wit and smarts and sophistication, on both story and art levels

They're the intricate efforts of construction like From Hell, and the easy complexity of a page of Chris Ware's comics, and the brutal intellectual honesty of Bryan Talbot and in the intricate designs of Frank Quiteley. 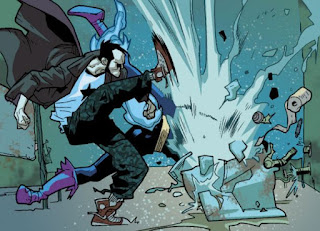 The best comics are all action, all of the time.

They're pure excitement, finding the buzz in the panel break, going for intensity through fluid motion, somehow making static images come alive. You can do anything with words and pictures, an one of the things comics does best is intense action.

Like comics that have the smooth clarity of Matt Wagner and his criminally ignored choreography skills, or the frenetic claustrophobia of Frank Miller and his brilliant use of cinematic techniques, or the sugar rush of Paul Pope and his energy that burns up the page, or Stuart Immonen's remarkable use of body language to convey kinetic energy. 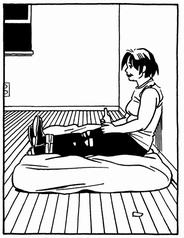 The best comics are the ones that make me cry. 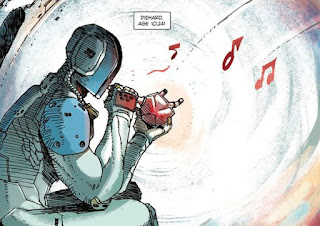 The best comic are experimental, and always looking to do something different in the comic medium.

This can lead to the abstract craziness from uncompromising artistic voices, written and drawn by nobody you've ever heard of, overcoming obscurity through ferocious newness. But even in the strict formats of modern comics, there has never been so many talented artists all striving to do something new. New things with story layout, and pacing, and use of the comic panel.

Some of them - comics like the punishingly intricate Prophet or the blazing multimedia of Dave McKean's best work – find a hungry audience, but recognition, fame and financial reward aren't the most important things in this part of the comic universe.

There are no limits, and there will always people trying to prove it. Most of them fail, but damn it, at least they try. 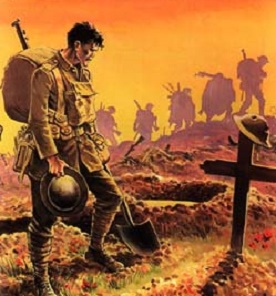 The best comics are polemic cries for attention to injustice, bringing large slabs of truths into a largely escapist medium.

It's a small, but vital, corner of the comic world, because they are desperate cries for help in a cruel world. More than 40 years of comics from Pat Mills are devoted to standing up for the dispossessed and the disenfranchised, and the sharp eye of Joe Sacco shines light on neglected areas of human suffering. 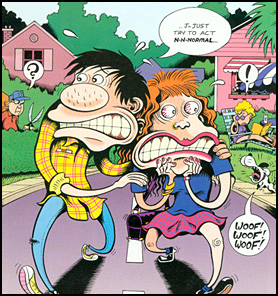 The best comics are those that look at real life and look at it through the perverted mirror of their comic art.

Artists like Peter Bagge or Eddie Campbell or Joe Matt all put down their lives in the strict grids of a comic page, exposing themselves for truth and occasional ridicule.

That takes some guts, man. 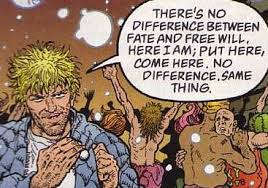 The best comics are ambitious, and who cares if they work or not?

The history of comics is full of ambitious failures, and a few ambitious success stories. Some comics reach for the stars, and even if they fall back to Earth, at least they went for it. Knowing your limitations can be both humbling and disconcerting, but breaking free of them is always worth a go, which is why comics like Peter Milligan or James Robinson's many fine and fashionable failures are always worth reading.

Some strive for brilliance in half a dozen pages, saying something true and honest about the human condition in 36 panel or less, and some go unashamedly for the epic, with comics like The Invisibles and Cerebus slowly losing their goddamn minds over pages and pages of mind-bending craziness. 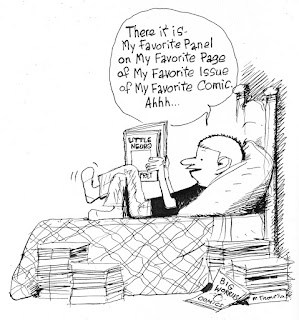 And the very best comics are all of these at once. They're smart, stylish, real, passionate, and funny, emotional, experimental and exciting.

The best comics are all these things and more. There is so much glory, and so much brilliance. They might be difficult to find sometimes, buried in oceans of mediocre rubbish that doesn't even try to reach one of these goals. 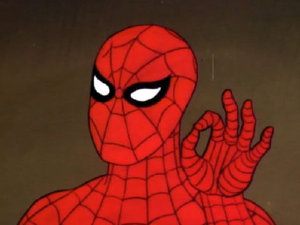 I gave this to the person who asked about the best comics. They said that it was nice, but they just wanted to read some fucking Spider-Man shit.
Posted by Bob Temuka at 2:20 PM