Years and years after they were produced in a fevered rush of enthusiasm and fingers sticky with ink, comic fanzines can still be dripping in passion, and can still be invaluable slices of cultural history.

They're snapshots of specific times and places in pop culture, and help us remember past controversies and feuds. We live in a world where entire controversies can flare and die within a week, drained dry of any life by social media saturation, and seeing a time when fights can stretch over years is fascinating. And they help us remember the fun stuff, too.

I always buy grotty old fanzines when I find them in comic shops and second hand bookstores and record stores. There is always something worthwhile inside. 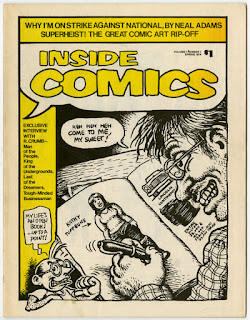 Fanzine culture peaked a long time ago now, and has been utterly consumed by the ease and reach of internet platforms, so it's easy to forget how important they once were. We're all watching The Avengers now, but for many comic fans in the sixties, seventies and eighties, the only way they could reach people with similar tastes was by making their own shit and putting it out there.

They were a  real connection, back when you couldn't just join a Facebook group, or leave a few messages on CBR. Comics attracted readers who were natural loners, used to getting caught up in Marvel minutiae and getting a bit weirdly introspective when somebody asks them about Batman, but it's always nice to know you've not totally alone in the cold, harsh world. That there are other people who like the same shit as you out there.

Through the power of the mighty postal system, fanzines brought these people together. Some of them got right into it, and contributed themselves or made their own, and a lot of them were just content to watch and follow. Either way, they knew they weren't alone. 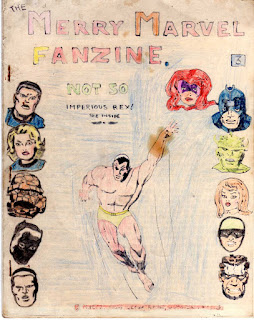 We now live in a Fanboy world, and fanzines can take some of the credit – and the blame – for that as well. Everybody is a bit of a nerd now, and cares deeply about something absolutely insignificant. We've all got a passion for something.

That passion used to really only find an outlet in fanzines, until the creators of these flimsy little slices of joy rode that passion right into the professional world. They stayed just as passionate right into their working lives, and made it acceptable, and something that you didn't need to be ashamed about.

That world produced many of the pros that helped shaped comic culture. That's where Julius bloody Schwartz made some insanely impressive contacts before a lifetime at DC, and where Roy Thomas used a love of the Golden Age to springboard into a long, long career of men in tights, and where a whole bunch of new punks in the seventies made their first impressions with the big boys.

It was a fairly good way to start a career – if you could prove you could create something, and stick with it, and not be a dick about everything – you could start influencing the real world. 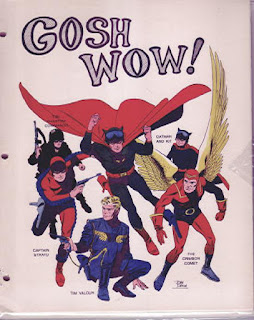 Now, fanzines are a part of history, consigned to the junk pile of the past. Eminently disposable, the vast majority get tossed out as trash in the end, and a fanzine from decades ago can become extraordinarily rare, even if some poor bustard probably still has a boxful of over-published issues sitting in an attic somewhere.

Now, when we've taken the idea of disposability to historically high levels, they're even more interesting, because they're physical pieces of history, still existing in real, physical form, just waiting to reveal a whole bunch of forgotten secrets. 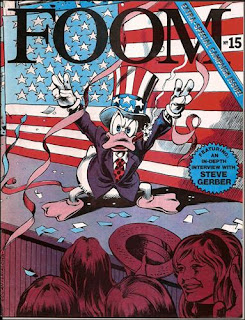 So yeah, you bet your arse I snap any old fanzine I see when I see 'em. I can live with the appalling standard of copy editing, dubious designs choices and outright bullshit that often fill them, because I always love cracking open the past.

Besides, I never saw the damn things in my part of the world when I was a kid. All the really good fanzines were put out in Britain and the UK, and I was on the arse end of the planet with no resources to get them. I didn't even know how to change my money into something I could send to somebody overseas, and even if I had, the postage costs might have put an end to it too.

Even the most wide-spread fanzines – including some in-house things that Marvel and DC both put out in the seventies - never filtered down this far. I still have never actually seen an issue of the Foom fanzine from Marvel, and I only ever got my first issue of the DC equivalent earlier this year in a Portland shop.

So now I grab them whenever I see them, because there is a bloody good chance I'll never see them again. 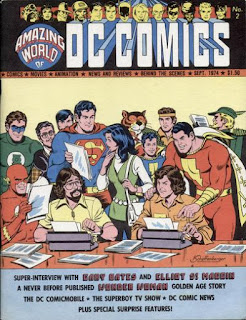 The most noticeable thing about these old amateur magazine is how much people care about stupid crap the nobody remembers anymore.

All the big fights and feuds - things like the Kirby versus Marvel, or Michael Fleischer versus everybody - have been well-documented, but so many other tiny little fights going on, that most people have long moved past. Arguments over ratings systems and creative rights that felt so important at the time, now look a little quaint, because we've all moved past. After all, nobody can claim that full creative rights will usher in a totally new golden age any more, not after all those original Image creators screwed the pooch.

We like to convince ourselves that the internet has brought out the worst in people in this regard, that we've never been more petty and aggravated, but we just have more of an outlet these days. The same snark and bile and ridicule is there in fanzine pages, and just as funny as it ever was, once you get the right perspective on it. 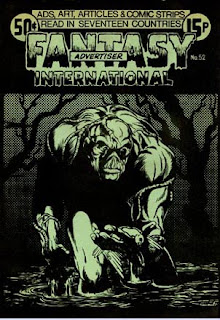 The other really noticeable thing is the love, which still outshines the stupid fighting, by so much. As much as they tear the things they love apart, they still love them, and it still radiates off these musty old pages.

That kind of passion never really dies. It was a hell of a lot of effort putting a fanzine together, and probably more than a little scary sharing that enthusiasm with the world, and they only did it because they really, really liked the shit they were talking about. Even if that passion can get a bit over the top and dopey - yesterday's epic masterpiece doesn't always live up to the praise - these things are created from love, and that's always more interesting than any corporate hack work.

I love the goofy bastards who put all these things together, because they loved their comics and their fantasy and their horror and whatever they wanted to write about, because they just couldn't help themselves.

I came too late to really get into any fanzines, especially because I lived so far away. I did get the Time/Space Visualiser - the surprisingly meaty fanzine from the Doctor Who Fan Club - for a couple of years, but that was it, and there hasn't been a new TSV in years now.

But all those little slices of history are still out there, largely unloved and mostly ignored, and I'll always keep am eye out for them. They're just waiting to reveal history, if you can ever be bothered to look for them.
Posted by Bob Temuka at 2:12 PM