Philip Jose Farmer was tapping into something powerful when he had Doc Savage and Tarzan literally cross cocks that one time, and we're not just talking about the obvious throbbing members.

Farmer's A Feast Unknown brought together the two pulp heroes under legal-friendly aliases and is still a ridiculously entertaining action romp, 45 years after it was published in 1970. It's just a tiny slice in Farmer's massive bibliography, but it's one of the most crucial, and most fun.

The fun is self-evident, with the adventure icons racing through a fevered fight against the usual mysterious and vast global conspiracy, while all their clothes fall off. But the importance is seriously under-stated, because Farmer was playing around with some big, culture-defining ideas decades ago, and the mainstream pop world is only just catching up. 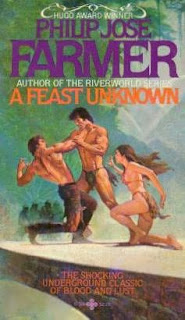 Farmer was always the totally harmless, slightly inappropriate and enormously entertaining drunk uncle of late 20th century science fiction literature. He had big ideas about life and existence and consciousness and this wonderful, strange universe of ours, but he was never afraid to get a bit dirty and grubby, and his best works were always a wonderful amalgamation of the gutter and the divine.

He found a huge audience with his Riverworld books, one of the greatest high concepts in all of science fiction, as everybody who ever lived wakes up on the banks of a world-spanning river, with no explanations or clear purpose. He also got into some seriously psychological shit with his World of Tiers series, even writing a book about the series' real-life use in psychotherapy, and he wrote a genuine Kilgore Trout novel, which pissed off Kurt Vonnegut Jr enormously.

And he wrote dozens and dozens and dozens of other novels and essays and short stories, often targeting subjects that were traditionally taboo in sci-fi worlds, like sex and religion, and all the messy stuff in-between. His stories certainly weren't for everybody, and every now and then he could get genuinely offensive, but they were often more thoughtful than they looked, and just as exciting as they promised. 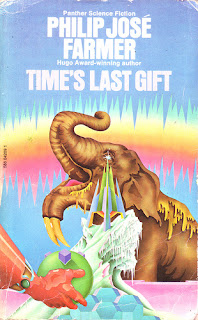 I came to Farmer by accident – his works weren't found in my local libraries, not even in the adult section, and I would have missed him entirely if I hadn't heard about him from an article in some random issue of Starlog. But that was enough. This is somewhere in my mid-teens, somewhere in the early nineties, and his fiction sounded incredibly enticing, and like nothing else I was reading at the time.

I soon found some slightly soiled copies of his work at the local second hand bookstore, and I was off. His work had a vitality that was often missing in other pulp pastiches, and he always remembered that while man was reaching for the stars, he was mired in physical desires. Sex and death often intertwined, which was incredibly appealing as a teenager, and gave his stories their own swagger.

And, best of all, he made connections between fictions that was remarkably addictive, building up this vast chronology of the fantastic, dating back thousands of years to the time of Opar, and pushing these stale old heroes into strange new territories.

His books could still prove maddeningly hard to find – I still haven't read the Mad Goblin/Lord of The Trees stories, because I've never seen them bloody anywhere – but I still couldn't get enough of this kind of obsessive cataloguing. And as Farmer ended up tying more and more characters into the same world – the world of the Wold Newton family – I was there for the ride. 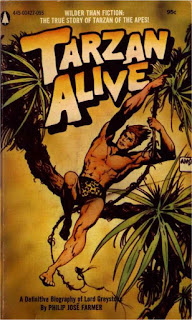 There were other writers who did similar things before Farmer, and there had been intricate fictional universes in the world of comic books, but not on the scale that Farmer worked on. In his fantastic fictional biographies of Tarzan and Doc Savage, he laid out a vast tapestry of ultra-heroism, all dating them back together to a single event – the falling of a meteor in England in 1778.

This real-life event was, in Farmer's hands, the catalyst for all the great heroes of 20th century action yarns, spawning legacies of grey-eyed and steel-jawed heroes. They were often related, and Farmer sometimes even made the argument that different heroes were the same person, cracking under the weight of multiple identities and convoluted histories. 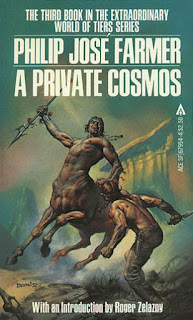 In a long career full of brilliant ideas, this was Farmer's greatest. Bringing the heroes together, and saying they all existed in the same fictional world, was a fantastically strong idea that still resonates, today, and still produces fictions that make billions and billions of dollars.

Farmer's ideas of a shared world reached some strange moment of perfection in the slightly sleazy prose of A Feast Unknown, promising a universe where everything counted, and where everything was connected. It's a small world in the pulp universe, where these indomitable heroes could barely go to the store without stumbling across some other adventurer on a desperate mission of their own, teaming up for the greater good.

It's an idea that has been almost totally drained of anything exciting and new now, and recent attempts to build shared universes in movies and comics and novels has led to some regrettable efforts, but they can still prove both artistically and commercially viable, and both the successes and failures all owe their debt to Farmer. 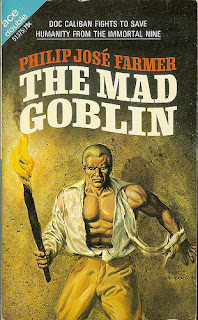 Philip Jose Farmer merged with the infinite in 2009, but the ideas he left behind are getting bigger and bigger, as shared universes become the ultimate breeding grounds for lucrative franchises.

Farmer really tied it all together, and it's an idea that had been refined with a number of rollicking League of extraordinary Gentlemen stories by Moore and O'Neill, or Kim Newman's bloody fangtastic Anno Dracula series, and anything becomes possible, and anyone can meet anyone.

Farmer sometimes wrote himself into his own stories, using the most obvious pseudonyms, which means that while he is no longer with us, he lives on in his own fiction. Maybe one day we will wake up on a Riverworld, and he'll be there. I doubt he'll be smug if he was proven to be right about everything, but I'm sure he'd be proud.
Posted by Bob Temuka at 4:28 PM

Great write up. I read Lord Tyger during my stint in jail, and everything you said is true. He was desperately concerned for his characters. Their earnestness and the crazy, sexy, practically "realistic" lives just rang more honest than any of the other fantasy brick in the can. I love him. Thankfully, I live in a city that fetishizes books, so I have yet to run out of supply!