The Multiversity: Funny books at the end of everything

Despite all the gaudy costumes and silly superpowers, it is possible to take superhero comics far too seriously. The big comic companies positively encourage that seriousness, with a big push for their most 'important' stories, conveniently ignoring anything that points out how bloody absurd they really are.

And it's certainly possible to take Grant Morrison's superhero comics too seriously – because they're full of big, weird themes, and plotting that is complex to the point of being obtuse. Morrison's superheroes are stranger, stronger and smarter than the average capes 'n tights brigade, so you're almost obligated to take them seriously.

Which is a bit of a shame, because sometimes, they're really, really fucking funny. Even in the darkness of despair, there's a grin.

Almost all of the Multiversity comics that Morrison and his strong roster of artists have produced over the past year have ended on a down note, where all seems lost as the trumpet sounds for the end of the world. With the notable and vital exception of good ol' Captain Marvel and his chums, who are just too darn positive to ever really corrupt, everything is screwed for everyone.

And it just kept getting worse, through every issue, as body counts rose and all hope shrivelled up, until you get to the Ultra Comics issue, which is just nihilistic to the nth degree. It's a comic that reached a point where writers and critics whose opinion I trust and value were actively repulsed by it, seeing the themes and ideas within as actually harmful.

And then the final issue came out last week, and one of the main characters is an eight-foot tall bunny who can shrug off decapitation due to the cartoon laws of physics that rule his world. And if that isn't a sign that Morrison isn't taking things as seriously as some people think he is, then the constant cracking of jokes certainly is. 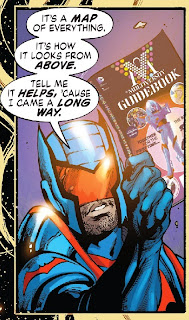 The Multiversity #2, drawn by Ivan Reis, sees DC heroes from dozens of alternate worlds team up to beat down the bad guy – a extra-dimensional and existential bunch of thugs named the Gentry. And that's exactly what they do, with multi-trillions of lives saved and a new team of super-guardians established, a new force to help defeat greater menaces that flare up towards the end of the story.

It's ultra-fast paced and very, very serious about defeating evil, but it's also crammed full of goofy gags, with Captain Carrot even taking a panel to point out how absurd it's all getting, and that absurdity will always triumph.

There are the cutest little versions of the Justice League being used as vessels for the ultimate evil; Aquawoman turning out to be the biggest, baddest native life-form in her universe; a Rubik’s cube being used as the engine for utter destruction; the Hellblazer's awful cockney accent; the way the Savinas are so easily taken care of; vampires craving lattes and Americanos; and the final – perhaps ultimate - joke that the cost of saving all of reality works out to be about eight hundred bucks.

As stylish and smart as these comics get, it's in the humour that the humanity lies. It might put off those readers who can't bear the wink of irony – something that worked perfectly fine for super-comics for decades and decades – but it's the dumb jokes that give the vast cast of the story their humanity. 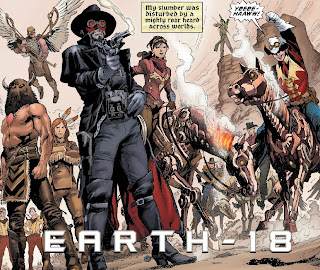 Of course, it could be argued that the humour distracts from the deeper, darker themes, and is designed to do that, part of the uber-story that I'm being distracted by daft one-lines distracted y the

But I'm not going to argue that point, because that's sucking all the fun out of it.

It's not confined to Morrison's stuff, or even DC – even Spider-Man has recently spent months lost in a crowd of alternate versions of himself – but the avalanche of Sight Different Versions of favourite characters just keeps diluting the original concept.

Still, it is interesting – and again, quite funny – that none of the Justice Incarnate team at the end of the story are from the main DC universe, with the heroes from the regular continuity missing out on the mega-threat entirely. 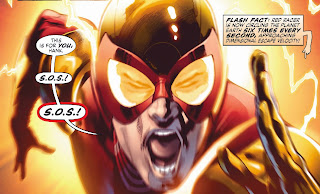 There is an interesting side effect for the story taking place outside the confines of regular continuity – you're left with characters who are echoes of the regular one. The African-American Superman is still a totally valid Superman – he even has the right costume and attitude and everything - but he's still just another version of the original, cooked up by a couple of young dreamers in the 1930s.

These echoes of familiar characters extend to strange versions of  entire worlds and universes – long-ignored continuities dusted off for the 21st century.

They're familiar, but they're still not the same worlds that Kanigher, Haney, Fox and so many other great writers came up with – they're new, changed versions. All these echoes give the Multiversity comics a strangely haunted feeling, which feels fitting, because its supposed to be a haunted comic, isn't it? 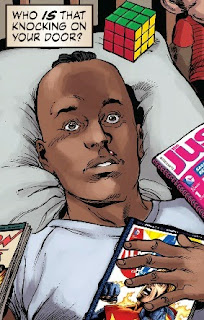 Modern superhero comics are still stuck at the level of the late adolescent, where everything is so serious, and there is nothing to laugh about, and

A new round of catastrophic crossover comics is about to roll out, with Everyone fighting Everyone for the sake of Everything, and there will be a lot of gritted teeth and bowed heads and very serious agonising over sacrifice and loss and what it means to be a hero and blah blah blah...

With worlds living and dying and living again, there probably won't be room for smiles or ironic, optimistic winks. Superheroes are too busy and serious for that. 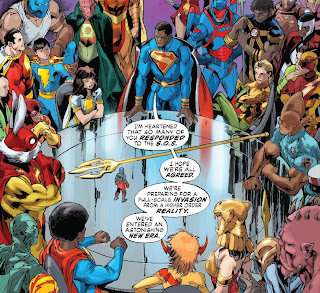