For such a defined character, Prince Namor, the Sub-Mariner is hard to get right. It's easy for creators to overdo the arrogance, or, even worse, underplay it, and his stories can sometimes get bogged down in tedious Atlantean politics. (Atlantean politics are the second most boring thing in all of comics, beaten only by vampire politics.)

So while he may be one of the earliest and greatest of all Marvel characters, he's a tough fit. Namor's own solo series rarely last longer than a year or two, and recent attempts to integrate him more closely with the X-books made some kind of sense – he's been acknowledged as Marvel's first mutant for several decades – but his imperious rages didn't really fit in a world of mutant angst.

But there was one time when a Namor series actually worked, when somebody tried something different, taking him out of the deep water and into the shiny world of corporate affairs. After years of damp squibs, John Byrne's early nineties Namor comic was a refreshing blast of salt water. 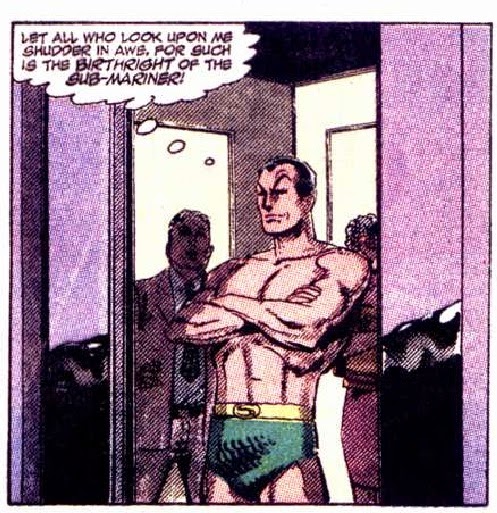 One of the side-effects of a teenage love of horror novels was that my comic consumption dropped dramatically for a while. I was still on-board with long-running obsessions like 2000ad and the Uncanny X-Men, but was drifting away from the world of comics.

And then Marvel released a bunch of shiny new books that were young and hip and slick, and I was just the right age to fall for them. The New Warriors was a particular favourite, but I also had a soft spot for Valentino's wonderfully cluttered Guardians of the Galaxy, and I truly loved John Byrne's Namor book.

In this series, Namor enters the ruthless world of corporate affairs, generating his wealth by literally picking it up off the sea floor and using it to take down fat cats that the law is scared to touch. 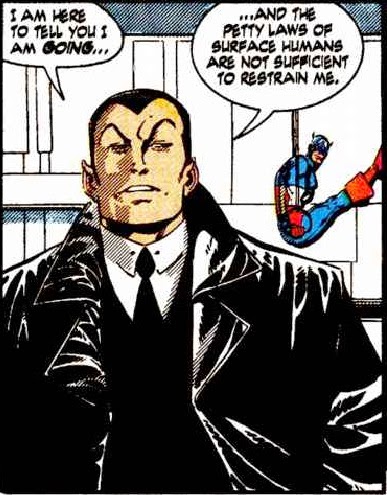 It was a surprisingly bright and colourful comic for its time, because most mainstream comics from the start of the nineties were busy learning all the wrong lessons from the Dark Knight Returns. This was both literal and metaphorical - there was a lovely clean colour palette and Byrne's art would never be this slick again, but the stories were also hopeful and optimistic.

It also wasn't shy about wallowing in its title character's long history, reuniting the Invaders, half a century after WW2, and frequently using events at the birth of the Marvel Universe to launch the story in new directions.

And some of the new directions were charmingly weird, with outrageous villains and side-characters popping up, some strange business involving severed heads that were actually still connected to the bodies, and Namor riding around on a giant Griffin. The weirdness never overwhelmed the story, but gave the series just enough flavour to make it stand out amongst Marvel's other superhero shenanigans.

But the best thing about Namor, and the reason it worked so much better than any other crack at the character, was its quietly subversive look at the world of multi-national corporations. 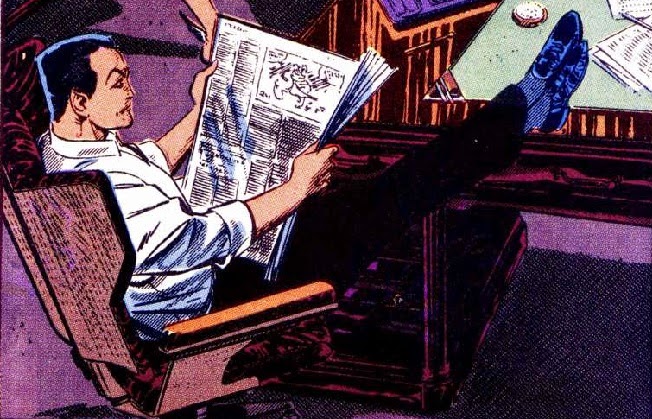 Corporate big wigs had often been the villains in many Marvel Universe stories, dating right back to its earliest days. Writers with a hole where their ultimate villain should be could always insert Roxxon executive #723 into the role.

But this wasn't a problem that could be solved with punching – these stories usually ended with the hero taking some comfort in the fact they took down a company's super-stooge, tempered by the melancholy that they couldn't really touch the corporate mentality that kicked the whole thing off.

Namor had his own melancholies, but he never let any slight against his personage or kingdom stand, and once the surface world started messing up his underwater world, it was on, and he was taking this fight all the way. 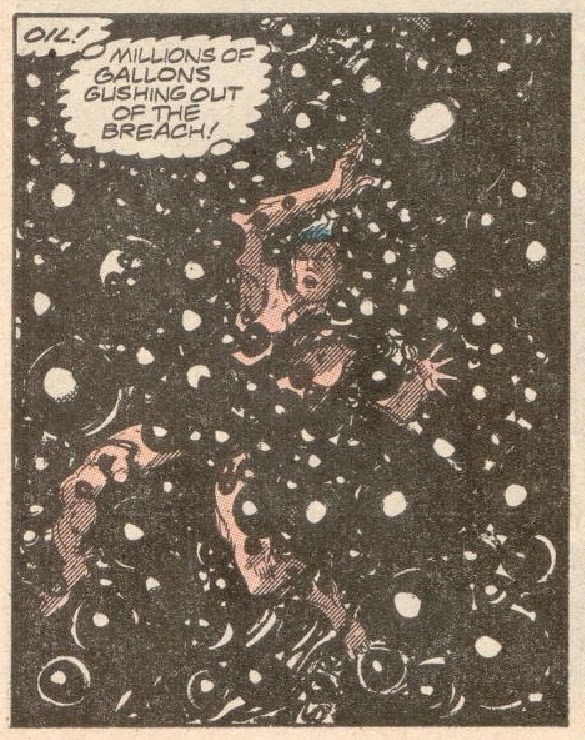 In a way, this was refuting the hippy tactics in the fight against multinationals of the past – corporate wrongdoers don't give a shit about sit-ins or boycotts, they're sharks in an ocean of global finance, ceaselessly eating more and more. Almost totally unstoppable, unless they run into a bigger shark.

And Namor has always been the biggest shark. His haughty arrogance was, for once, a true asset, because he was in a world of arrogant arseholes, where the guy with the biggest dick won the argument, and Namor had no problems in that regard.

You didn't bring down these bad guys by punching them in the nose, you joined in their own game and destroyed them with their own methods and rules.

This was a surprisingly adult theme for a 1990 Marvel superhero comic. Comics with copious blood and tits had “mature reader” warnings slapped all over them, but this was a properly mature superhero comic – solving problems through understanding the enemy, assimilation and amalgamation, rather than violence. 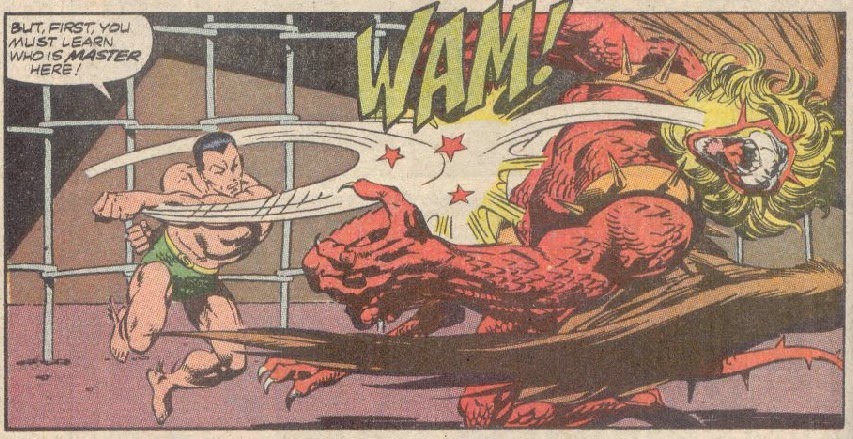 The themes are particularly resonant after the last decade of high rolling bankers butt-fucking the world, and the environmental issues that also made Namor such a hip new thing in the early nineties are still totally relevant – the seas are still being depleted of vital life and choked with oil from catastrophic spills.

This Namor comic also had plenty of exciting action to offset the boardroom dramatics. Namor was also a hair's breadth away from ripping off his suit and throwing himself out the window, even after he loses his sweet little ankle wings. Byrne's portrayal of Namor himself captured the tight majesty of the character, and his Namorita was never cuter.

Byrne's actions scenes also had an impressive sense of pace and scale, and there are less of the exposition dumps that would fill up the creator's later works. 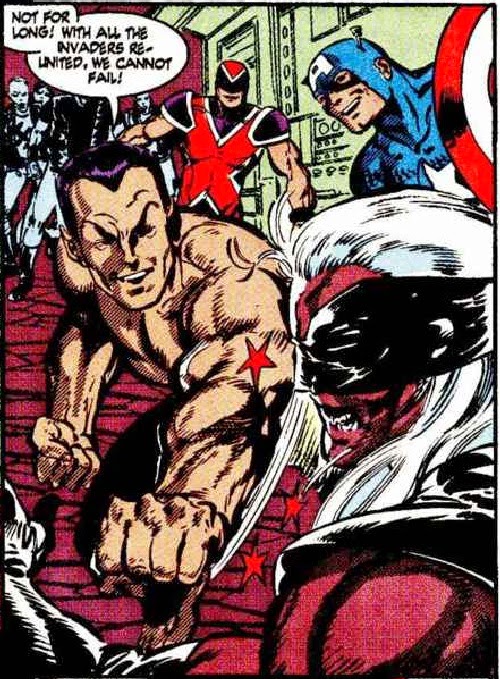 In fact, this is the last time I was ever really obsessed with a comic by John Byrne. I enjoyed plenty of his works still to come, especially the Next Men comics, but a passion that first flared into life when I got my six-year-old hands on a copy of X-Men #138 never flared that brightly again.

It was good enough to keep me interested in comics at a very changeable time in my life, and left me ready to move on to something new in my comic diet. I thought I was growing out of regular superhero comics – I never really did – and I wanted something new. Something weird.
Posted by Bob Temuka at 11:11 PM