Fatale: Horror, out of order

Despite its impeccable good looks and fine heritage, it is taking me a while to fully fall for the charms of Fatale, by Ed Brubaker and Sean Phillips. Even though I'm a great admirer of their Criminal comics, I'm still not totally convinced by their latest work.

This trepidation means that I keep missing the odd issue in the series, because I've never been moved enough to get it on a special order, while still interested enough to buy copies up off the shelves, whenever I see them.

This mean that even though the series is little more than a year old, I've already missed out on a few issues that I've came back to later. In an odd coincidence, I got the first two issues of the first two story arcs in order, than skipped straight to the end of both, before going back and filling in the gaps.

It makes a complicated narrative even more complicated, but that's okay. I don't think there is anything wrong with a bit of complication in your narrative. 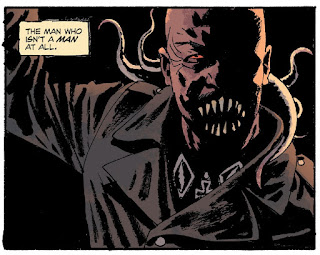 Back when I was 20 and convinced that Quentin Tarantino was the greatest living filmmaker, I was baffled by the fact that some people just couldn't follow the plot of Pulp Fiction, because it was told out of order. I had no problems following the storyline, and could handle the way John Travolta is gunned down halfway through, but still gets to walk triumphantly out of that diner at the end.

I think it's largely due to a lifelong comic book habit. I'm used to reading stories out of order because comic books are mainly serialised things, and the nature of serialisation means that issues are missed, or dropped, or lost. Or you can come into a narrative that has been running far longer than you've been alive, with no idea of the insanely complicated backstory that led to the current status quo.

In my case, take the mid-seventies Avengers. I had a couple of the issues that involved that whole Korvac thing before I was 10, but only read the issues in-between in the past year. That's a non-linear story that I've been following, told out of order over a period of decades, but I was still able to follow the story as a little kid, and I was still able to be surprised by the way the individual issues linked together as a grown man.

Compared to that, all the cinematic time-warping of something like a Tarantino film is a piece of piss. 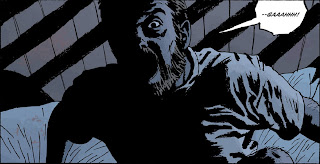 Once I started living near comic shops, I started reading stories in more of an order, but I still come to things from the completely wrong chronological perspective, and it rarely damages my appreciation, if the comic is good enough that each individual part of it stands on its own merits. I genuinely think Robbie Morrison and Simon Fraser's Nikolai Dante is one of the best comic stories I've read in the past decade, and I only read the last third of that long saga in the proper order, and I think there are still some individual episodes of the story I have to catch up on. Doesn't matter. Still love it, in any order.

And then there is something like Fatale, which I like enough to follow, but not enough to guarantee each issue is put aside for me. It's a comic that is often impressive, and just as often problematic, which means I'm completely lazy about the actual purchase of issues. 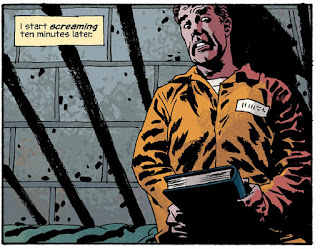 I'm not sure where this slight dissatisfaction with Fatale comes from, and it might just because I really wish they were doing Criminal comics instead. I'm certainly less enamoured of pulp theatrics as Brubaker is, (I usually like the ideas in pulp bullshit, but can't handle the execution), and I feel less connected to immortal love goddesses than the desperate losers in Brubaker/Phillips' other main work.

And just the basic concept, of the noir femme fatale in a Lovecraftian world of eldritch horrors, feels just a bit too old-fashioned, (although I might just be saying that because I finally got to see John Dies At The End last night, and the way it told it's story of vast, gooey entities trying to break into our world felt pretty fucking fresh.) This story, and the way it is presented, feels particularly well-trodden.

Fatale also uses the trick of pandering to a cliché – in this case, the femme fatale who brings ruin to everybody around her – but getting away with it by ironically commenting on the fact that it is a cliché. It's a classic case of having the cake and eating it too, and while it's not always a bad thing – Garth Ennis had built a successful career on pointing out that violence is horrible, while revelling in scenes of massacre – the cliché in this case is still borderline misogynistic and out-of-place in 21st century fiction. 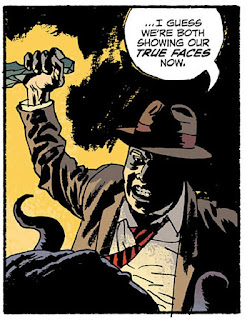 And yet, Brubaker and Phillips are top creators, and never let that worrying cliché overwhelm the story. Josephine might be a harbinger of doom to all those who cross her path, but she's still just a confused human being, who still feels regret at the carnage she leaves behind. After a year of Fatale, there is enough hope that it will all work out for her, (although , this is one of theose stories where you might hope for a happy ending, but you're not going to get it).

And all the other characters feel like proper people, with fears and desires. Large parts of the cast die horrible deaths, but there are few faceless tragedies in Brubaker's scripts (and even a few laughs in the dark).

Of course, it helps that Sean Phillips' art is, as ever, fucking great. He still does the best betrayed look in modern comics, his action scenes are vivid and the colour palette is just right – dark and dirty when the characters descend into hell, and sharply bright when the horror really hits.

And the whole story is peculiarly followable, even when read out of order. Reading the start of each arc before skipping to the end, and then going back to fill the story in, actually made the story feel faster and more energetic. 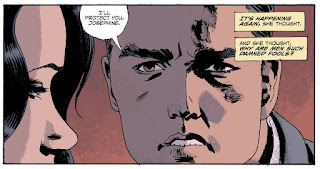 You don't do a jigsaw puzzle in order -- starting from one corner and moving along. It comes together in pieces, and some great stories have been told in this way.

It doesn't always work, even with the same creators. Criminal is so tightly plotted that it really does read best in one big book. And I was still grateful when Fatale did do a series of one-off stories after its first two arcs, which were much easier to follow

But I really don't have many problems reading a story in the wrong order. Because it's nothing new, and because it forces you to concentrate on the merits of the individual issue, and because coming at it from an odd perspective can be helpful in a story where the dimensional barriers between our world and unimaginable horror beginning to tear.
Posted by Bob Temuka at 10:37 PM