The X-Men comics are far from the sales juggernaut they used to be, watered down through a combination of product over-saturation and painfully mediocre stories over the past few decades.

But Marvel keeps on trying to capture the past fire and make the X-Men relevant again, relaunching the X-books every couple of years (and in recent times, every 18 months), in a desperate bid to grab the fickle comic reader's attention.

Usually it doesn't work, and after a brief burst of optimism, the new direction usually turns out to be more of the same old shit, regurgitating ideas that Chris Claremont already thoroughly mined decades ago. Occasionally – very occasionally – it does actually work, and you get something like Grant Morrison's run, which actually made the Children of the Atom sexy and interesting again for a good couple of months, before swiftly reverting to the dull and overcomplicated status quo, mere minutes after Morrison was done.

The latest relaunch and reinvigoration of the X-Men is part of the overall Marvel Now initiative, which has actually been generally successful, with some strong writing and stunning art on a number of key titles. For the X-books, the big idea involved bringing in Brian Michael Bendis and letting him run with the concept for a while.

The announcement that Bendis would be the new writer of the main X-books wasn't actually that exciting, with the writer's long stint on the Avengers franchise starting to run out of steam several years ago (although his Ultimate Spider-Man remains consistently entertaining). The idea that Bendis would bring his unique style of dialogue and plotting to the X-books looked like it would just be more of the same as his Avengers work, with more moaning about prejudice.

But so far, it is turned out pretty well. 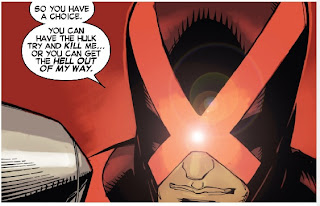 There are still far too many X-books, including multiple versions of X-Force, but it's easy enough to just focus on the two main titles – All-New X-Men and Uncanny X-Men, and ignore the rest.

These two titles are the backbone of the X-line, with one focussing on Cyclops and his merry band of mutants taking on a more proactive (and scary) role – there isn't actually that much difference between that group and the various versions of the Brotherhood of Evil Mutants – and the other title starring a younger version of the original team, brought into the future to see the consequences of their actions.

While it's easy to moan about the fact there are so many X-books (and that's an old record to play, dating back more than 20 years), one of the nicest things about this relaunch is that these two comics are all you need to follow the story. There are a few details that get lost between the cracks, but you don't have to buy 13 issues to follow one story, it's all rocking along nicely in these two titles.

As enjoyable as they are, the two Bendis books also have their negative aspects. The dialogue can be clumsy – Bendis' teen-speak remains as slightly tone-deaf as ever – and when it comes to the main characters, he hasn't got every voice right just yet.

And while they are reasonably self-contained, there are some things happening off panel that can be a tiny bit maddening, when they're not important enough to explain in the opening recap page (I still haven't figured out why Magneto is rocking the bald look).

And it is a little disappointing that the story still requires normal people to freak the hell out in the sight of all mutants in order to chew through the big plot machinations. There isn't anything as bone-headed and clunky as the 'Don't call me mutant' moment from Havok in a recent issue of Uncanny Avengers, but it would be nice if people didn't get all violent and primitive at the sight of somebody different. That's something that's long-played out in the X-Men, and there must be new, smarter ways to deal with interactions with the ever-hysterical Marvel public. 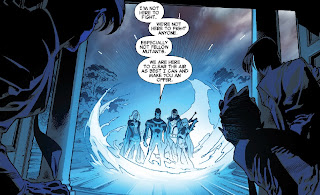 So it's not perfect, but very, very few comics are, and there is still enough good stuff in these comics to balance the bad, resulting in one of the most succesful X-relaunches in the past decade.

The most obvious bright spot is the art - Stuart Immonen's work is as satisfying as ever on the All-New book, his action scenes are still impressively idiosyncratic and he also does the best wavering lower lip in comics. Even though he has worked on a number of high profile projects, Immonen is still strangely under-valued, but his art is continuing to evolve, so it always looks fresh and new, and his X-Men work is no exception.

The insane schedule for All-New X-Men has seen ten issues released in a matter of a few months, so there has already been some extensive fill-in art, and while it is still fairly solid work, Immonen is the real deal.

Meanwhile, Uncanny X-Men sees the return of Chris Bachalo to the X-books, which is always welcome news. Bachalo has been in and out of the orbit of Planet X for about 20 years now, and his art is as messy and chaotic as ever, but he also reins in the insane close-ups and blotchy figures for this latest work. His storytelling is clearer than it has been in years, without losing that wonderful design work he brings to all his projects.

Beneath the gorgeous art, Bendis is also doing some nice work, and refreshes the X-book with a tight focus on a few characters, some basic storytelling tricks (that always work) and a pleasing willingness to get to the point.

Even though he is still finding his feet with the X-books, Bendis may actually be more suited for the X-Men than the Avengers. The Avengers are the professionals, but the X-Men are more of a family – they don't choose to be mutants, and all live together under the same roof, more or less.

The Bendis banter feels a bit more real when it's coming between people who have spent their whole adult lives together, rather than a team which has all its members drop in or out. And when it sometimes even comes out of the mouth of the grown-up terrorist Cyclops, it makes the whole comic a bit less grim.

Bendis also keeps the interest going with some basic storytelling moves, including the simplest of cliffhangers, which are blatant attempts to keep the reader coming back, but no less effective for their obviousness. And for a Bendis comic, he actually gets to the point quickly, but crucially raises more questions as he does so - when it looks like one major character has switched allegiances at the climax of Uncanny #1, he has come clean by #3, but it's still not clear if he's actually telling it straight. 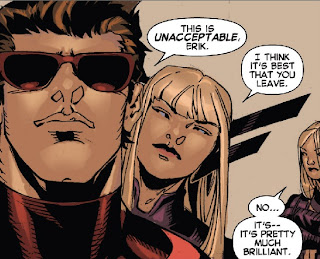 But the most appealing thing about the new X-Men comics is that they are actually going somewhere. After years of spinning its wheels, trying to get out of the mudhole the ‘NO MORE MUTANTS’ mess put it into, the X-books have actually rejected the usual status quo, and are trying to get somne growth into the main characters.

The big mistake new writers often make with the X-Men is a ‘back to basics’ approach. There is nothing wrong with having the characters adhere to their core concepts, but of all the major mainstream superhero comics, the X-Men is the one that is most suited for evolution and change, ever since the day they decided to replace the original whitebread team with a cast consisting of a Native American, an African, a Russian, a Canadian, a German and an Irishman.

The most successful relaunches of the X-books have taken on this spirit of change, without worrying too much about the status quo. The least successful tend to make superficial attempts at change – usually some kind of random team line-up, while ensuring that the story itself is just the same old, same old.

The most surprising thing about the new X-books is that they do actually feel like they are going somewhere, in a definite direction. This is so surprising because the hook behind the current trend is that the original team have been brought into the future, and it initially appears that this is the ultimate back-to-basics approach. But these are not the same characters that Lee and Kirby came up with long ago - Jean Grey has emerged as the leader, while Cyclops is mentally crippled by his future actions.

And so the X-Men, a comic that has always had shifting loyalties and perspectives, moves into a more uncertain future, which is really the way it should be.

Like many comic readers, I went through an X-phase in my early teens, but apart from that Morrison run, I haven't really followed the title since 1993.

But now I've read the first ten issues of the All-New X-Men, and the first three of the new Uncanny series, and I do like what I see, and want to see more. That's evolution for you.
Posted by Bob Temuka at 7:36 PM