Ogami Itto's death stare is almost the best thing in Lone Wolf and Cub. Koike and Kojima's epic saga is brilliant in so many ways, but the death stare never fails to impress.

It's the stare that Ogami throws out just before he unloads on some fool, part of the aura of death he must project before he takes another man's life. It's a slight squint of the eyes, a heavy furrowing of those awesome eyebrows and the shutting away of all compassion. It is a warrior preparing to perform his art, and it's going to be bloody business.

Sometimes it only happens for a panel, sometimes it stretches on for pages, but it happens a lot in Lone Wolf and Cub, and it's effective every time. It's the death stare, and it brings oblivion. 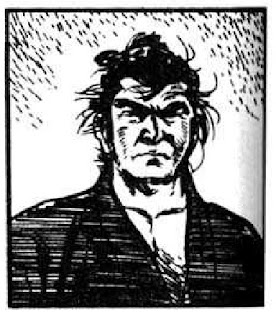 My knowledge of Japanese comics is woeful – I read every new volume of the Kurosagi Corpse Delivery Service for kicks, I've got through all of Akira about half a dozen times, and I was genuinely disturbed by a lot of Barefoot Gen, but that's almost it.

But there is also Lone Wolf and Cub, and it's easily my favourite Japanese comic, even though I came to it quite late. I was vaguely aware of the Shogun Assassin movie growing up, but the first time I saw a proper Lone Wolf reference was in an issue of What The-?!, Marvel's lame humour comic. In it, Lone Wolverine is taking Chris Claremont around in a cart, and when they are confronted by assassins, the duo kill them with the razor sharp edges of Claremont's internal monologues.

I didn't get that joke for years.

But when First Comics started presenting them in handsome – albeit thin – prestige format comics, I finally got that joke, and finally got the brilliance of Koike and Kojima's wonderful comic. 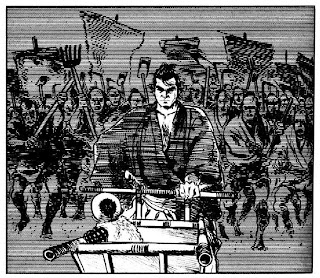 Even though the tale often gets bogs down in the complicated politics and clan loyalties of 17th century Japan, Lone Wolf and Cub is the simplest of stories – a wronged warrior pursues a slow path of bloody vengeance, accompanied by his very young son. It's a story that is dripping in philosophy, while never skimping on the blood.

There of dozens of stories throughout the hundreds and hundreds and hundreds of pages of Lone Wolf and Cub, and they're unrelentingly brilliant. Each story is very familiar - Ogami and Daigoro roll into some new part of the country, unleash some hell, and roll on again – but the variations are infinite. There are stories of vengeance and honour, and blood and thunder, and peace and contemplation.

Ogami Itto is a lost soul, bound for hell, but he stands up to bullies, and the corrupt, and the foolish, and he never fails to fulfill hos oath. There are all sorts of parables in these pages as Itto takes step after step along the white path - stories with an environmental theme, stories that judge the cost of human progress, and stories that remind the reader that sometimes, the best thing in life is an act of simple kindness

There are philosophical stories, heavy on Buddhist teachings, that can be as blunt as a clenched fist, or as sharp as the finest blade. The Lone Wolf knows that he is walking a path of damnation, and there is existential drama in his willingness to take those steps. When he encounters truly holy men, he is humbled in response, and when he meets evil men, he is noble in defiance.

And all that philosophy inevitably ends in some kind of bloodshed, which also makes Lone Wolf and Cub so compulsively readable. When the babycart assassin explodes into action, Goseki Kojima's pages spring into life – these forty-year-old comics are still packed with vitality and movement, and Kojima's heavy use of thick ink lines grounds it all in a dirty reality. The pacing of the action is also extraordinary – moments that take a dozen pages to get to are over in a split second, while a simple stare-down between two foes can last for pages (and if they're standing there thinking about the various attacking moves they could perform, it can go on for dozens of pages).

This is why the comics remain the best version of Lone Wolf and Cub, despite some succesful adaptations. These moments can take as long as the reader wants – they can linger on an infinite moment before death, or speed through a moment of high action. The reader controls the time, and that control is put to great use in the Lone Wolf stories. 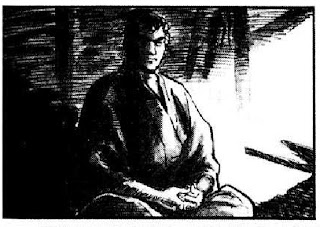 Unsurprisingly, given my deep affection for stories that mix up intense action with pop philosophy, I fell hard for the Lone Wolf comics when I first read The Gateless Barrier – a story where the Lone Wolf is hired to kill a holy man, who is so pure and noble that no assassin can take on the karma of his death.

It's a story that involves the main character sitting around, trying to breach a barrier with no gate, before he makes a spiritual breakthrough and is strong enough to carry out one extraordinary moment of poetic violence, and it's one of my absolute favourite comic stories ever.

This dichotomy – the struggle between the base violence of the real world and the aspirational beauty of a better one – has rarely been more blissful or moving, in any format. 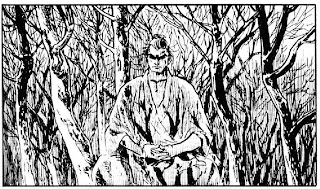 I first read that story, and much of the earliest part of the Lone Wolf and Cub saga, in the English reprints published by First Comics in the late eighties, the ones that came with some gorgeous covers by Frank Miller, Bill Sienkiewicz and Matt Wagner. It's a nice format, even though the volumes are painfully thin – usually only about 48 pages long – just enough to get in a decent story, but over too quickly.

The only Lone Wolf I actually own are the two-thirds of the First comics, and while they're still rewarding to dip into, the collection is incomplete.

The easiest collection to acquire in English are the little digest comics, and while I like them, the pages need room to breathe, and feel stuffed into the smaller format. I did use them to see how it all turns out at the suitably epic end, but I wish they would publish a cheap Showcase-type collection like they did with Akira, hundreds of full-sized pages on cheap newsprint. It's the perfect comic for that format, which makes its absense all the more puzzling. (ADDENDUMB: Good timing!) 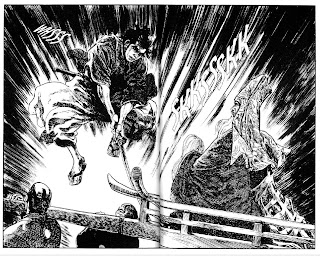 At least there are always the movies, which are exceptionally easy to get hold of. I really like the films, even though they simplify certain aspects of the vast overall story and complicate stuff that didn't need to be complicated. There is still enough of that Lone Wolf genius on screen, seeping up from the page, but I mainly like them because I love the way Tomisaburo Wakayama's wonderfully shabby Itto just runs into a vast horde of bad guys and starts hacking away, and ends up killing everybody.

He's all graceful and shit when he's preparing for battle, and in one-on-one duels, and when he strikes his first stance, but the fight choreography is just wild and clumsy, and endlessly entertaining. Floatey/dancey swordfighting amongst the trees with superhuman skill can get a monotonous - sometimes it's fun just to watch a warrior go completely apeshit, even if he looks a bit silly doing it. 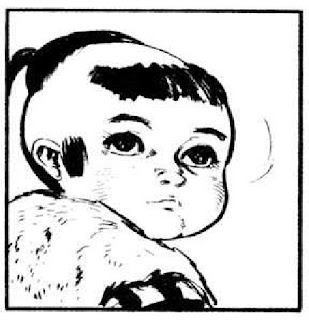 At least Wakayama has still got that death stare down, and when he whips it out, serious shit ius going to go down.

The death stare is almost the best thing about Lone Wolf and Cub, but there is also something stronger, and deeper, than a gaze of deadly concentration, and it's there in the babycart that Itto rolls ahead of him. It's the moments between the Wolf and his cub, when they face off against impossible odds together, or in the painful moments where they are seperated by dire circumstances.

It helps that Daigoro is so damn cute, in all of the mediums he has appeared in, with those massive eyes, emotive lip and silent demeanor, but it's that relationship between father and son that takes the story onto a new level. It's more important than any philosophy, or any death stare. On the path of death, there is still love, and that redeems all. 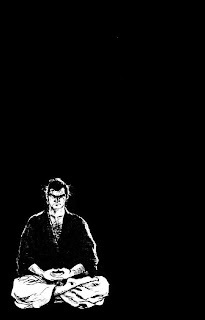 Ask and ye shall receive - new larger books on the way!
http://www.amazon.com/Lone-Wolf-Cub-Omnibus-Volume/dp/1616551348

Bloody hell! I had no idea they were doing that. That's made my day.