Are we reading the same comic?


He’s not the goddamn Batman, and Captain America doesn’t condone torture. I thought this was clear.

All Star Batman and Robin lost a lot of people with ‘I’m the Goddamn Batman” in issue two. It was one of those pieces of dialogue that manages to be silly, a little ironic and kinda funny, all at the same time. After that, you were either on that particular roller coaster of a comic to the end, or you most definitely were not.

I was certainly on board after that, because even if it sounded a bit clumsy and stupid, it also made me laugh, and I even have this put up as the desktop picture on my computer now and again, and it makes me happy:

I can totally understand people who didn’t like the way that comic went, or where it was going, and took the chance to jump off the title at the earliest opportunity. This type of hyperbollocks is definitely not for everybody.

But I was genuinely baffled by readers who started bleating that “Batman wouldn’t say that”, because it was utterly redundant. Of course Batman doesn’t say things like that – even Batman knows he doesn’t say like that, as is acknowledged in the very same story. It’s right there on the goddamn page:

It is an act he is putting on to try and impress Dick Grayson, and it’s totally not working, because right from the start, nobody knows the real Batman like Robin, and he can tell he’s faking it. He even says “He’s faking it” half a dozen times in Miller’s typically beautiful overindulgence.

The text is clear. This is early Batman – not the confident and proven Dark Knight – and he doesn’t know what works yet. It’s all spelled out in Jared K Fletcher’s lettering. It’s not a subtext or a vague theme – it’s right there. 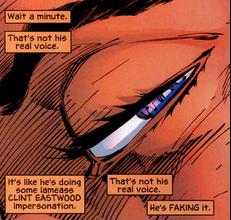 So while I do appreciate the charm of a goddamn Batman, it was never worth getting your knickers in a twist if you think it’s silly, especially if you fail to actually read the comic which tells you it’s all an act.

It would be okay if this was an isolated incident, but this kind of woeful misreading of incredibly simple superhero comics just keeps on happening.
It happened again last week. I’ve been thoroughly enjoying Warren Ellis’ short run on Secret Avengers. It’s fast and quick and thoughtful and unexpectedly empathetic. Each issue was as sharp as a razor, while still finding room for extravagant spreads by cutting out the obvious shit.

The past six issues of Secret Avengers are a lot of what I like about superhero comics. It’s not everything, but it scratches a specific itch.

After reading the last issue, I was interested enough to see what the general vibe was like online about the series, and was a little confused to discover that the main point a lot of people took out of the issue was that ‘OMG! CAP DOESN’T TORTURE! I’M NEVER READING ANOTHER ELLIS COMIC AGAIN”

Which is funny, because I completely missed all of that torture.

This is what happens in the comic. Captain America and chums are looking for a traitor And so… 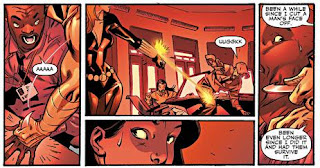 Somebody touches the back of somebody else’s hand, another person is shot with a super-stinger capable of everything from Instant Death to Harmless Light Show That Leaves You Feeling Slightly Numb and somebody holds a blade up to somebody else’s face.

There is no blood in any of these panels. With one exception, they’re all innocent people involved in anti-terrorist work, and Captain America would never hurt anybody who is on his side, but he’s not in his Cap uniform, so the traitor doesn’t know that.

When I read that bit, I was happy enough to believe that a Simon/Kirby creation didn’t condone torture, but he still understands the value of a good bluff. He’s been doing that since the Bulge.

At least, that’s how I got from it when I read this comic. Quick bluff, and then on to the monster-fighting to round out the issue. It didn’t even occur to me that anybody – Steve Rogers, Warren Ellis or Marvel in general – was condoning the use of torture.

Hell, this had already happened before in the same bloody comic - Ed Brubakerdid exactly the same thing back in issue seven: 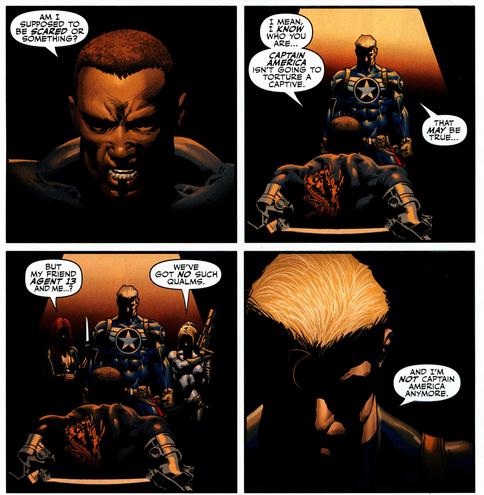 There was a notable lack of outcry over this, so were the people who got upset when Warren Ellis did it offended by the fact that it was a British writer saying it?
This kind of manufactured outrage is very easy to condone, because we can all agree that torture is an evil and vile act that has no place in a civilized world. What is forgotten is that Ellis knows this as well. He just didn’t have the space in the comic to explain every single bloody thing.

But have no fear, true believer! If Captain America’s actions in Secret Avengers #22 left you with a bad taste in your mouth, just print out and cut up the following bits of dialogue, and then with the magic of glue, paste them somewhere in the comic where there is a bit of space around the characters.

SHARON CARTER: Gosh, Steve. I sure am glad you only had to bluff your way into finding out who the traitor was. It would have been terrible if we had needed to actually hurt people.

CAPTAIN AMERICA:  No, Sharon. Even if the spy had stayed silent, we would not have resorted to that, because that’s not THE AMERICAN WAY. 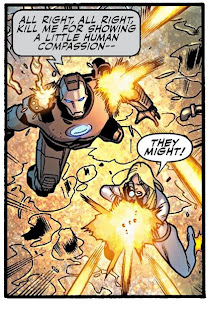 There is plenty to be outraged about in the comic business, plenty of other causes to support, plenty of things to be justifiably irritated by (and that’s as close as I’m getting to ever talking about Before Watchmen on this blog.) But I really don’t think this was one of them.

Jones, one of the Jones boys said...

I haven't read the comic, but...according to the UN Office for the High Commissioner for Human Rights, the threat of torture can be considered under international law to be itself a form of torture. So maybe Cap wasn't just condoning torture, but actually doing it himself?

Yes, I know this is a comment about a post from 2012 referencing an even older post from 2007, but what are a few years between strangers? My similar but different take on All-Star Batman can be found here: http://reviewsofdoom.blogspot.com/2007/05/its-not-all-star-batman-and-robin.html. I always thought it was seriously misunderstood. Love your blog by the way - one of the few with intelligent and interesting things to say that doesn't feel the need to force the author's politics on the readers. I appreciate that.