It’s a little disconcerting to realise that the special 100-page, end-of-year issues of 2000ad have now been going for more than a dozen years. They still feel fresh and new, probably because those 12 years are still only a small stretch in the British comic’s 35-year history.

They also feel all shiny because they tend to be packed with great one-off stories featuring classic 2000ad characters by the very best creators, mixed in with the launch of important new storylines, with enough room left over for a few brave stabs at all new stuff. It’s in these special issues that you find things like Morrison and Yeowell doing a one-off Zenith, or Mills and O’Neill putting the final cap on the twisting Nemesis saga.

I was a little let down by Prog 2011 a year ago – largely due to the lack of John Wagner and/or Nikolai Dante – but I was still looking forward to 2012. I intentionally ignored anything about the comic, but I still knew this one would have Wagner and Dante, and a lot more besides.

Happily, Prog 2012 is the best of these year-end things in… well…. years. While the usual ratio of quality in a regular 2000ad comic remains the same – two exceptional strips, two okay ones, and one terrible story – Prog 2012 has eight stories and three of them are gruddamn brilliant, four of them are pretty damn good, and only one is real rubbish. That’s a decent ratio. 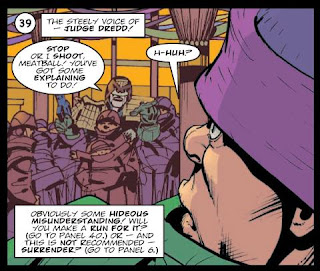 The only bad thing to say about Choose Your Own Xmas is that it sets an impossibly high standard for the rest of the comic, because it’s easily the best thing in it.

As the title suggests, it’s a Choose Your Own Adventure-type thing, that laces in extra doses of irony and metatextual fun – this ain’t no Diceman. While the main character bounces around the 66-panels of the 12 page story, dying again and again, it took me a while to notice that Judge Dredd has a more linear path through the story, with just enough science fiction bollocks to explain what is actually going on, and why Jackson Packard has so many different fates.

Much of the story’s humour comes from a time-honoured Dredd technique where the main character realises he is in a story, and can hear the narrator in the caption box, or starts seeing these weird balloons with words in them hovering over other characters’ heads, and the whole story has just the right mix of dead cleverness, droll wit and exploding heads to make it one of the great Dredd holiday stories.

It also has some lovely art from John Higgins, with his usual stylish stiffness boosted by some terrific colouring. But it’s mainly the clever scripting by Ewing that makes this story an instant classic and gets Prog 2012 off to the best possible start.

Absalom is a strong, fast-paced piece of cockney horror noir, and Rennie isn’t shy about showing the love to his influences with the main character sitting around talking about his old mates Jack Regan, Charlie Barlow and ‘that Irish git who was involved in all that zombie mess us Manchester way’.

Absalom’s observation that he is the last of the old guard gives the story more of an emotional kick than expected, and Trevallion’s art is as spooky as ever, with the whole strip a nice combination of working class magick and some crazy hardcore demonic action. 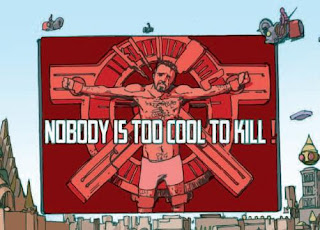 Dante is down in the dungeon again, the world is being told that nobody is too cool to kill, and I don’t think his Mum is going to get out of this one.

On the other hand, Elena is already wiping blood of her blade, and I’m still convinced Lulu is on Nikolai’s side and her betrayal is all part of the plan.

I am breathlessly excited about the direction the Nikolai Dante stories are heading in.

I'm embarrassed to admit it took me six pages to realise this story about a Nubian warrior in the Roman army who has had his soul stripped from him was a new version of Blackhawk. 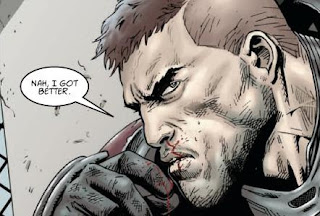 Grey Area was – unfortunately – the one strip in this bumper comic that I really didn’t like. It was the one that did nothing for me, full of all that faux machismo of all the dullest 2000ad characters.

It’s a story about aliens in a Earth-based ghetto, and the hard-nosed humans who police the alien zone, seen through the eyes of a young female rookie who seems a bit naïve, but probably has something to hide, and I’m sure I’ve read this story a dozen times before. Even the gritted teeth and ridiculous air in Richardson’s art is horribly familiar.

To be honest, I’m not sure it isn’t just a pisstake and I’m not getting the joke. It has lines like “I WANT to scare you, honey. You NEED to be scared. Or you won’t last to WEEK TWO.” and “Bulliet? I thought you died!” “Nah, I got better.”

This… this can’t be serious, can it? 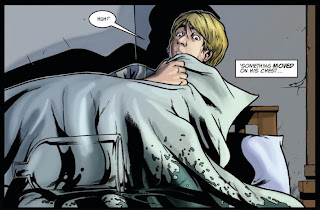 This relatively new strip is always a bit too formal, but has a sly sense of wit and some surprisingly creepy moments, so more is always welcome. It’s also one of those classic 2000ad concepts that lends itself to short, sharp and shocking one-off stories, which is what it goes for here, and largely succeeds. 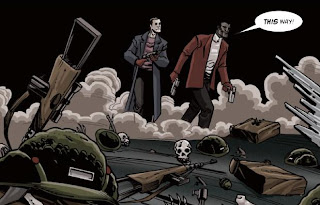 This strip is usually dead average for me - even though it’s been popular enough to keep running since the late nineties, I’ve only really loved it when things broke down into Downlode Tales and people like Chris Weston and Sean Phillips were doing the art.

But Dan Abnett (despite the depressingly routine Grey Area)  is still a smart writer, and manages to do a Sinister Dexter story that advances its achingly long plot, while still celebrating the history of the comic, getting in special guest appearances from Dredd, Nikolai, Johnny & Wulf and Abnett’s own Gene The Hackman.

Like the Absalom shout-outs, there’s nothing wrong with this kind of cheap thrill, when you’re in the mood for celebration, even if the Stonts meeting the Gunsharks was a bit too clever for its own good. 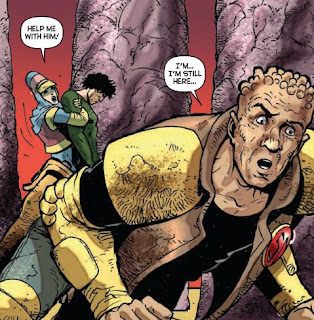 Strontium Dog
The Life and Death of Johnny Alpha – Chapter Two: The Project by JohN wagner and Carlos Ezquerra 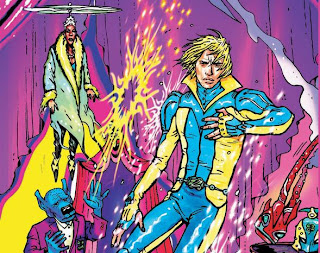 2000ad got into a good groove towards the end of 2011, with Dredd going somewhere Important with a capital Eye and the most recent series of both Low Life and Indigo Prime proving to be quietly spectacular. Prog 2012 was a fitting end to the year.

And that’s another year of 2000ad done, and another to come. There is a lot to look forward to, including  the Zaucer of Zilk by the legendary Brendan McCarthy and that man Ewing, Nikolai Dante’s self-prophesied (and independently verified) spectacular end is coming, and I would not be surprised if the latest Dredd mega-epic is the one that will finally finish the old man. Not knowing what comes next is a real joy, and it’s a nice feeling to be a bit over-eager about these things.

Looking forward to the future is the only way to face it.
Posted by Bob Temuka at 12:28 PM