What is best in life? All Star Section Eight!


Choosing the best comic book of 2015 is as impossible as ever, with so many brilliant and different comics, including loads I won't get around to until I stumble across them in the library in three years time. (Although Dredd, as always, was up there.)

But picking my favourite comic is a lot easier, because it's the one I always look forward to the most, even if it's not as technically fine and emotionally rich as other comics.  It's the one I always want to read first. And this year, that comic was All Star Section Eight. 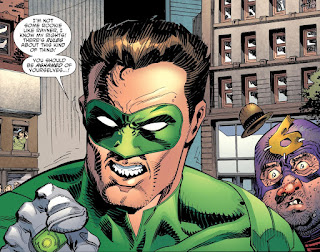 It's the latest round of repulsive, puerile and juvenile nonsense from Garth Ennis and John McCrea, and a semi-sequel to their mighty Hitman run. Over six issues, an alcoholic mess of a man confronts the reality of his existence, and manages to puke all over it. It's tremendously moving. 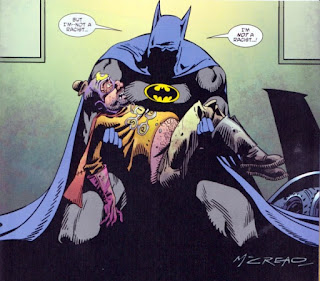 But the thing I loved most about it was this - in this time of great geekiness, where superheroes with long and proud history need to be respected as the icons of modern culture they are, there are still comics that don't give a fuck about any of that, and All Star Section Eight is one of them.

This comic didn't give a shit if it shattered precious preconceptions on who Batman and Flash and the Martian Manhunter who, or what they are. It said the hell with it, and made Etrigan a gangsta rapper, (with his homes the Phantom Stranger), and made Green Lantern a total prick, who admirably refuses to have anything to do with all this filthy mess.

Superman saves the day with charm and thoughtfulness, but he also does it by offering an alcoholic a full bottle of whiskey, which is an appalling thing for such a respected icon to do. This comic don't give a fuck. 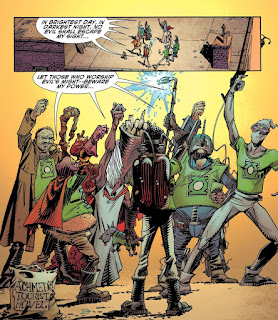 So it's slightly incredible that DC even published the thing, and showed enough of a sense of humour about itself, when so many of its regular comics are bloated and self-important. I love superheores as much as anybody, but I always like to see somebody taking the piss out of them too.

While All Star Section eight does get ideologically dodgy as shit, especially when severe cranial trauma turns Wonder woman into a five-year-old, it's the closest thing we've got to Mad's superhero parodies of the 1950s, when Superduperman and Bat Boy and Rubin could be taken down a peg or three.

There is a lot of that still going on, but they are usually with thinly-disguised analogues, and to see the actual heroes put through such nastiness is actually surprising. It even finished on a note of optimism, with the foolishness of this world kept happily alive by a dying drunk in an alleyway, wrapped up in Superman's cape. 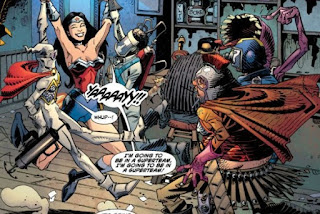 All Star Section Eight: Not big, not clever, but still somehow my favourite comic of the year.
Posted by Bob Temuka at 12:41 PM