The Legend of Luther Arkwright: Clean living might save us after all 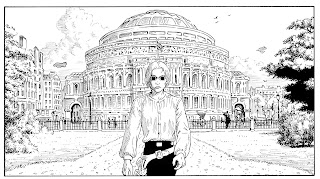 Bryan Talbot has been creating Luther Arkwright comics for more than 40 years, and they have been consistently wonderful - full of esoteric concepts, batshit crazy science and mad philosophical ideas, wielded to the driving engine of a solid action comic.

The Legend of Luther Arkwright - recently released in hardback as a 240-page original graphic novel in glorious black and white - is apparently Talbot's last word on the character, and even after all these years, the comic is going out on a typical high.

Talbot has produced stories about the trauma of sexual abuse and the intoxicating depths of history and folklore, so it's not surprising that the new Luther Arkwright is a deeply humanistic work, not afraid to shy away from the blood and misery that we can inflict on each other, but also looking for the light that shines through in acts of kindness and empathy.

For all the complexity of travelling between parallel worlds, it's a simple story - Arkwright is fighting for us all in his final battle against the next step on the evolutionary ladder, which is too genocidal for Luther's tastes. And he fights for all humans everywhere, because even after all the terrible things human beings are capable of, they are also still capable of things like love and creation and friendship and generosity, which are always worth fighting for.

Typically, Arkwright's battle is fought on multiple worlds at multiple times, and a different timeline is only ever a furrowed brow away. Like many in his generation, Talbot is obviously appalled by how peace and love ideas have metastasized into never-ending conflict and hate, and uses the opportunities of the 'What If' to stick his boot in.

The other worlds show how easily the current civilization can slide into apathetic fascism, and it's all pretty bloody depressing how possible it looks. But there is always an English Rose of rebellion that will  rise and new generations of freedom fighters ensure the fight for freedom never ends, especially when you've always got mad old bastards like Harry Fairfax by your side.

As grim as some worlds can get, there are also worlds of science and cooperation, full of people who can actually get along with each other (even if they had to brutally depose their authoritarian and religious leaders before they could get started). There is hope for everybody.

Especially when the complexities of good and evil can be reduced to something as binary as being a good person and being an arsehole .Luckily, while Luther was always about embracing your inner aura, the main character is still a multiversal assassin who sometimes has to assassinate some multiversal arseholes.

All this, the death and science and metaphysical catastrophe, is brought out through Talbot's bright, clear, black and white line. It's so bold and confident and always gorgeous, and there is even some unexpected pathos as hints of his older style, with the deep heavy rendering of his youth returning for some particularly gross parallel worlds.

If this Talbot's last word on Luther Arkwright, it's as fine an epitaph as anybody could ask for. On any world.