The Man Who Shot Liberty Valance: Soft at heart 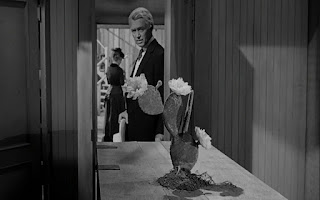 John Ford always tried to put on a show as being a cantankerous old coot - his famous interview with Peter Bogdanovich, where he disputes the whole idea that anything he has done has an artistic merit at all, is an absolute gem of a performance, as good as anything he ever squeezed out of John Wayne.

But his films could also be achingly sentimental, and he just couldn't hide that behind his goddamn eyepatch.

Sometimes entire films of his, such as the Quiet Man, are nothing but pure sentiment, and all about the ache of the heart, and sometimes it's just a tiny moment in a wide and blasted landscape full of death and gross vengeance, like the moment  in The Searchers when Ethan finally catches up to his niece, and the Duke's voice actually cracks as he tells her that he's not there to do her harm, and that he's just taking her home.

There's a moment like that right at the end of The Man Who Shot Liberty Valance, a great film that has a lot of things to say about standing up to bullies, and the way the legends of the Wild West have been shaped from something messy and complicated into something that is more palatable for the masses. That's all well and good, but it's the cactus rose on the coffin at the end of he movie that cuts to the heart, and tells you what sort of director Ford really was.

All that myth-making never says anything about what's really in somebody's heart, and how they remember the ones they've loved and lost, not like the way a simple gesture like the cactus flower can. And it shows that John Ford had a soul after all, no matter how fucking grumpy he got.
Posted by Bob Temuka at 6:47 PM