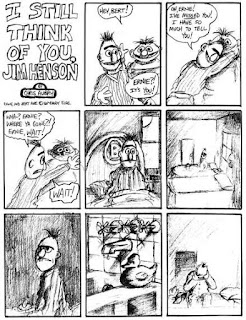 They vary greatly in actual quality, but this Jim Henson tribute from Jim Aubry, published in Cerebus #162, is always my favourite, and the saddest bloody single page story I've ever seen. That look on Ernie's face as he fades away...
Posted by Bob Temuka at 5:40 PM

My own Single Page appeared in Cerebus #146, oddly enough. Dave Sim said he was booked solid for the bi-weekly series, but since my page had Cerebus in it, he asked me if he could run it in Cerebus. Who was I to say no? There was alos a Richard Corben preview in that issue. My first published page, sandwiched between Sim/Gerhard and Richard Corben art! Not bad. Wish my own art had been better!