Last night The Invisibles saved my life: One month later…


For the past dozen years, I’ve been wondering where I would be at the exact when Dane stood in the street at the end of The Invisibles and told us OUR SENTENCE IS UP. 2012 seemed so far away in the nineties – I was going to be 37, which was, like, ancient. There was always a good chance I was never going to make it. That none of us would.

But the years rolled by, and I still wondered where I would be when Timewave Zero hit, and then we were deep in a new century and 2012 was nearly here and I was still here and we were all still here and suddenly it was December and the moment was now.

And at the exact moment – right at the minute – that the Supercontext unfolds at the end of The Invisibles, I was lying on the couch, snuggling up to the wife and watching Metalocalypse.

If that had been the end, it could have been worse. But it wasn’t the end. It never is. 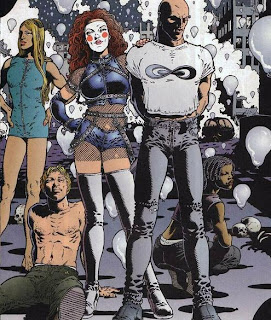 I remember the first time I heard about the Government making long-term plans for 2013 – it was still the early 2000s and the idea that we’d need to make plans for anything past 2012 seemed a bit laughable. Didn’t they know the world was going to end in 2012? And if it didn’t end, something was bound to happen – some lift in technology or consciousness or something.

It wasn’t just The Invisibles telling me there was a definite end point in history. I first heard about the Mayan calendar in the Death of The Fifth Sun segment in The Big Book Of The Unexplained by Doug Meonch and Rick Parker, published at the same time as the second volume of The Invisibles. It ends with the narrator – in the inestimable form of Charles Fort – portentously informing the reader that after 2012, there are no more suns.

But by the time 2012 rolled around, everybody was laughing about Mayans, and criticising Terrence McKenna’s maths, and nobody was talking about the Invisibles

I will always love The Invisibles, but I won’t ever love it again like I did when I was 23.

I fell hard for it in the nineties, but that’s 20 years ago now, and life has moved on. Reading it with a jaded 2013 eye, a lot of it seems clumsy and extraordinarily dated, tied to a certain era, where pre-millennial tension collided with post-ironic optimism.

But The Invisibles defined my won personal nineties as much as things like Pulp, The Prisoner and the Doctor Who New Adventures did. It might be tied to specific space-time co-ordinates in my life, but that’s beyond the fading reach of time passed, so it won’t ever fade.

By the time the first volume reached its climax with a metaphysical mindfuck in the House of Fun, the Invisibles wasn’t just a monthly comic book, it was a blueprint for life. And I’m pretty sure this made me an insufferable jerk, but I had some laughs.

I would get filthy drunk at least once a week – like, really fucking loaded – and read an issue or two of The Invisibles as the head buzzed with a dozen glasses of port inside. I still cringe when I think of the night I drank too much gin and sobbingly declared that I was in Queenstown when an impossible photo was taken, but I’m not ashamed of the time I stayed up all night drinking Scrumpy and watched the sun come up over St Kilda beach in Dunedin, surrounded by scattered copies of The Invisibles.

I haven’t sat on a beach and drunkenly cried over Invisibles comics in years, although I do think I’m still totally capable of doing it again.

I do still read a random selection of Invisibles comics about once a year, and give the whole series a proper re-read every three or four years, and I still like it a lot. It’s always wittier than I remember, and I still notice little games and tricks in the narrative, but it is also dated, and I’m not as enamored by the groovy ultra-violence and terribly unfashionable narcissism as I once was. It was always an arrogant comic, but that’s not that cool anymore.

So I can see its flaws so much better than I used to, now that’s it’s not quite so beautiful anymore. Some parts of it still sing, but other parts are over-familiar and just a little too arch.

I don’t blame the comics for all this. I blame me. The comic hasn’t changed, but I have, and Morrison doesn’t always do it for me anymore.

I still read all his stuff, and it’s all enjoyable, but sometimes when I read his work now, it feels like there is just too much thought going into it, and it’s too knowing and ironic, and storytelling flow is sacrificed for cleverness.

It’s still better than the vast majority of mainstream comics, and sometimes it’s better than all of them, but it’s just a little disappointing that in December 2012, at the end of history promised in the Invisibles, Morrison was still doing the same old shit – the two comics he had coming out that month were another Batman thing and a story about a hard-bitten killer who starts seeing a magic little dragon flying around him.

After seeing nuclear nightmare stories like The Day After and Threads as a kid, I always believed the world would probably end in my lifetime in some kind of apocalypse, a idea reinforced by all sorts of films and books about plagues, nuclear war and giant rocks from space over the years. While The Invisibles offered up the kind of Armageddon I could get behind, where everybody got what they wanted, it was still the end of the world.

But humans can be pessimistic bastards who always think they will be around to see the end of the world, and we’ve been thinking that since we first staggered out of the caves. It’s a weirdly conceited idea that we will be the special ones to see the last full stop of humanity, after millennia of progress. We can panic about Mayan calendars and hadron colliders all we want, but our own ends will doubtless be a lot more mundane that a total apocalypse.

So even though I bought into The Invisibles, heart and soul, and had the odd feeling the world could really end in 2012, I still got on with my life in the past decade-and-a-bit since the comic ended, and it’s been the best ten years of my life, getting into a career that I actually like and meeting I girl I actually love.

So there might have been the slightest twinge of disappointment that I didn’t enter the Supercontext in the arms of the lovely wife last month, while a funny cartoon played on the television, but it was only slight. I’d rather see what happens next.