Brendan McCarthy’s comics don’t discreetly move towards you with a polite enquiry, they come at you with a wicked glint in the eye and a beautiful passion for vivid entertainment.

They come at you with a ROARR! 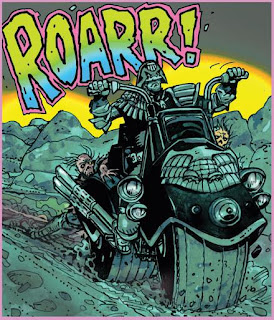 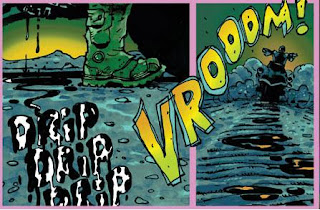 After a long and fascinating career that includes some remarkable Dredd comics, McCarthy returned to Judge Dredd with a stonkingly charming Doctor Who piss-take in 2000ad, and has followed that up with The Walking Dredd in issue 311 of the Megazine.

Well, it actually came out in June, but it’s only just shown up locally. It’s the first issue of the Judge Dredd Megazine that I’ve bought since it started putting reprint on the inside. It just got too expensive, but some new Mccarthy was enough to make me part with the $17.70 that #311 cost.

(It’s extraordinary, really – I buy fewer new comics than I have in decades, but I’ll always fork out for something by an idiosyncratic and visionary creator working on a solid character. Who would have thought that this was all it takes? DC apparently didn’t.)

But we’re not here to bitch and moan about the endless oceans of mediocrity that drown the comics business, we’re here to celebrate the fact that there is some new Judge Dredd comics drawn by Brendan McCarthy.

Because nobody does it like McCarthy – beneath a gory cover, the Big Man first shows up with those skinny, skinny legs of his - 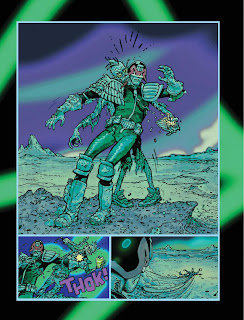 - and we’re off and running. There is a particular angle to Dredd’s helmet that only Mccarthy can pull off, and Dredd’s body has that same barbed-wire look wiriness that it had 20 years ago, so it’s unmistakably the same artist.

But – as always – there is always some weird little experimentation that feeds off that familiarity. McCarthy is a Far Out artist, throwing away flights of fancy that other artists could build a career upon. But like many artists in his generation, he thrives on the strict confines of a well-told story.

McCarthy is the ultimate freewheeling artist, but the rigidity of a strip like Dredd forces him to focus on his storytelling, and produces extremely satisfying results. Every single panel in The Walking Dredd is a perfect rectangle. Each little box contains some kind of extraordinary image, there is no need to go for crazy panel shapes when you’ve got crazy art. That restraint is everything – you need the straight man when you’ve got a zombie Dredd riding a giant mutant spider by eating part of its brain: 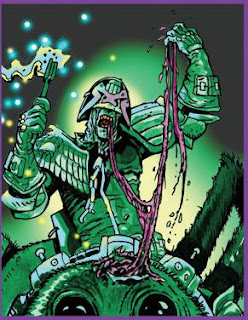 Dialogue is almost totally superfluous when you’ve got images like that, and credited scripter Rob Williams has the unenviable task of covering up all this lovely art with big word balloons.

The story can still be understood without any words, and there is one bit where Williams does something that pretty much all Dredd writers who aren’t John Wagner do and gets one aspect of Dredd’s deceptively complex character utterly wrong, (it’s the bit where he makes the crack about vegetarians – they have nothing to do with the law, so Dredd would never, ever have an opinion about it), and then nails a totally Dredd moment (it’s the bit where he shakes off the last effects of zombification and takes a whole hour off to get cleaned up before he hits the streets again.)

Besides, all that unnecessary dialogue does give it a creepy silver age vibe, and the ironic and rotting tone of a Tale from the Crypt. That’s perfectly acceptable.

But, with all due respect to Mr Williams, it’s the McCarthy art we’re here to praise. And while his storytelling skills are easily seen in the black and white versions of his comics - 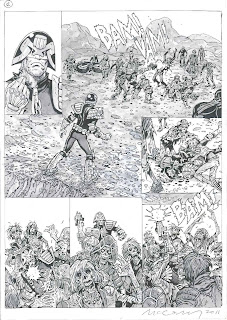 - it’s the colours that keep me coming back, baby. Dig those tones: 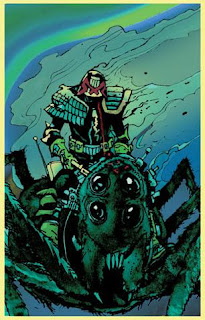 These are just as awesomely garish as any of McCarthy’s previous efforts. His eye for colour remains uniquely exceptional – he comes up with tones and entire colour palettes that nobody has tried before in comics, making it all look like a comic from ten years in the future. McCarthy’s comics are ahead of their times in so many ways, most of all in his paintbrush of colours.

Each page in The Walking Dredd is given its own distinctive colour tone – there are pages of purple and green chilly desolation, 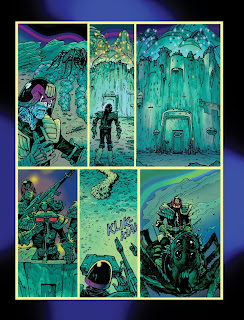 or orange and red apocalyptic fun 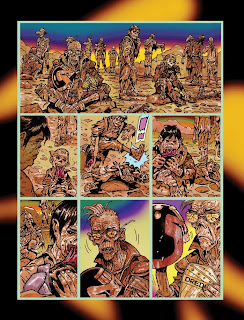 All balanced out by individual moments of vivacious Pop! 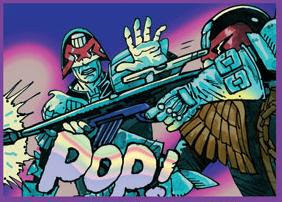 Another notable difference that takes a while to notice between the black and white simplicity and ultra-stylised colours is the border. There is nothing there on the orginal art, but once the colours are applied, it is boxed in and surrounded by a subtle border splashed with neon spray paint 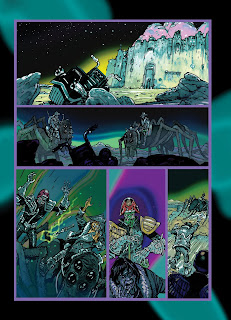 2000ad has often had to run stories that have needed some kind of intrusive border, with many strips commissioned for different publications with different sizes, and dumped in 2000ad with a tasteless banner, but these borders feel like a blatent attempt to give a cheap furturistic 3D effect.

And I’m totally down with that. Dredd should look both instantly dated and timelessly futuristic, and that’s just as hard as it sounds. McCarthy is apparently working on some new 2000ad strip, and I’ll be there for it, or for anything he does. Any artist who provides such beautiful work is always going to find an eager audience. 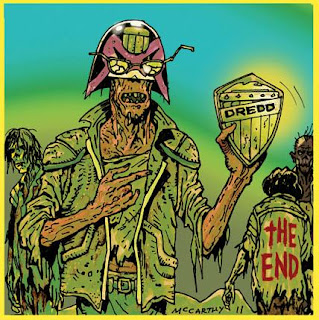 Thanks to David Rees for help with the scans

Great post, Bob! Brendan made some interesting comments about his art processes (including digital colouring) at the recent Kapow! event. I can try and get a transcript to you at some point. The world needs more McCarthy art in it, that's for sure.