Somewhere towards the end of the first episode of Mark Gatiss’ recent A History of Horror, the big man whips out a book about horror that he got as a Christmas present as a kid, and talks about its ridiculously strong influence. He talks about memorising every page in that book and the brilliant otherness of the films that the book covered, knowing every single page and every single picture.

A good, cheap thrill is an integral part of horror fiction, and I got the cheapest of thrills from recognising Gatiss’ favourite book – Alan G Frank’s The Movie Treasury of Horror Movies - as one that is sitting in a pile in the corner of my spare room. This one: 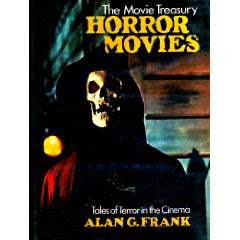 But there was an even better thrill in hearing Gatiss talk about that book, because it was something I definitely recognised.

Frank’s book is a good one, but the one that became my teenage bible was something different. It was another book about horror with a different set of pictures, but it crept inside my brain in that same way Gatiss was talking about.

It’s called Horrors: A History of Horror Films by Tom Hutchison & Roy Pickard, it looks like this: 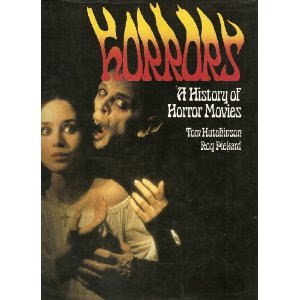 …and it’s the best bloody book ever.

* * *
I love horror movies. It’s my absolute favourite film genre, even if I don’t like to admit it sometimes. I still love action and comedies and thrillers and all the rest, but it’s the horror that has got the tightest grip on my soul.

I love the sheer unpredictability of them, the sense that anything – absolutely anything – could happen, and frequently does. I like the tension that builds to a gory release, admire the craft of making monsters, love the way things can get so incredibly intense I can barely stand it.

It’s the climactic 15 minutes of The Exorcist, or that second’s hesitation at the end of 28 Days Later, or Peter Cushing and Christopher Lee flinging themselves around in the ultimate battle between good and evil in Horror of Dracula.

It’s the vacant eyes of a zombie horde surrounding the shopping mall, or facing the corner in the final shot of the Blair Witch Project, or Michael Myers silently getting to his feet.

Some of the worst movies I’ve ever seen have had a horror label on them, but truly scary horror films are the best. A film that can generate genuine unease and fear is something worth watching, when so many movies can barely generate a bored shrug.

Horror is at its worst when it becomes painfully predictable – series such as the Final Destination or Saw movies aren’t shocking or thrilling, they’re just the same old thing, over and over again.
Each film adheres to such a thick formula that’s they’re barely worth watching.

Horror should always be surprising, and that takes more than a sudden decapitation or two to really hit home. At its best, it’s genuinely frightening. When it creeps under the skin and keeps you awake at night.

Good horror is always about something – they can be about the fear of the young or change, or the stupidity of consumerism or the destructive nature of prejudice or anything, but it also needs to stir up some primal fears to get that message across.

My wife hates them, and refuses to go to the cinema to see them. That’s fine by me, because I never want to see scary movies with anybody. It’s always better if you’re alone. In the dark.

* * *
The Hutchinson and Pickard book was published in 1983, but I bought it off a remainder table at a small Timaru bookshop one Saturday morning in 1987, begging my parents for the $10 I needed. I remember telling them I was willing to go without lunch if they bought me the book. I was 12 years old, and over the next half decade I devoured every page of that thing.

It’s nothing special – a rudimentary history of horror movies from Caligari and Nosferatu up to Carrie and Halloween, filled with short (but still rambling) analysis of key films in the genre’s history. But it my key into a whole new world of intense cinema, something I needed more than anything as a confused young teenager.

So I dived right in. Who wouldn’t?

It’s the pictures that did it - so full of possibilities. If you look at a single frame, something like Squirm can look like the most horrific thing ever, when the reality was a bit dull, a bit silly. Dracula AD1972 looked stylish and The Awakening looked startlingly gruelling, only for both to turn out to be turgid and lethargic.

But it was right about some things - The Masque of the Red Death is genuinely disturbing, especially when the final dance begins, and there is still something achingly human in the eyes behind the Phantom of the Opera’s mask.

Over the years I devoured that book, reading it over and over again, burning images from an American Werewolf In London, Dawn of the Dead and Das Niebelungen into my head.

After a few years, I saw many of the films in that book, and few lived up to expectations, but that’s not the point. I was stuck on the horror groove forever. I got into crime and western pictures, but the horror section is still always the first place I go to when I go to a DVD store.

This desire to watch anything new that shows up in that section has led to some real stinkers playing on my television, but it’s not enough to put me off. Not near enough.

* * *
Gatiss’ recent BBC series was brilliant, an unashamedly personal journey through the genre. His genuine enthusiasm for the very best in horror is marked by his own odd little touches – a quietly moving little tribute to the great Peter Cushing that still hints at the viciously repressed monster within this gentile man, his genuine unease about watching Freaks, his absolute refusal to treat Hammer’s film with any kind of irony – these are the kind of personal reactions that infuse Gatiss’ documentary.

This is the way it should be. Horror is a personal thing. There is nothing that defines an individual more than their own fears, both real and imagined. The things that truly scare me are indefinable, but unique.

So, using his own judgement, Gatiss used the documentary to break his own history of horror into three distinct eras – Hollywood horror of the thirties and forties, the Hammer-led burst into blood-red colour in the fifties and sixties, and the return of the Great American Horrors of the seventies.

That’s a fair history to cover, although I can’t help wondering if there have been any other really distinctive periods since. It’s hard to really nail down any one great wave of horror films in the last few decades, although countries like Japan and Mexico produced some brilliant slices of suspense.

But in the past ten years, Europe has produced the most thought provoking horror. Spain has produced a fair amount of it, from the jump scares of things like [Rec] to the quiet despair and lingering dread of movies like The Orphange. Let The Right One In really was another shot in the arm for slow dread, and there is a wide variety of imaginative and thoughtful horror still coming from the Old Country. That’s always something to look forward to.

* * *
It’s always quite nice when you find out somebody whose work you’ve enjoyed shares some of the same obsessions you do. While Gatiss’ love of horror has been evident in the television programmes he has written and appeared in, it was a genuine kick to hear about his youthful lust for horror and the similarities to my own experiences.

But I’m also left wondering if these kinds of obsessions are now a thing of the past. It wasn’t until two decades after I bought that Horror book that I finally got to see the last of the Hammer Dracula movies. They just weren’t available in any format, and all I had were books and magazines to tell me about it.

(And sure, all those reference sources were unanimous about the fact that the Satanic rites of Dracula was complete pants, but I still desperately wanted to see it.)

That’s all changed, and with remarkable speed. The rise of Youtube and torrenting means that you can watch some incredibly esoteric films with ease. There is always inevitable disappointment, but it’s still possible to find some gems incredibly quickly.

It is brilliant to finally see films I’ve dreamed about for years slapped up on YouTube in ten-part bites. The quality is rubbish, but I sat through a sixth generation video tape copy of Leatherface: Texas Chainsaw Massacre III, and may have a seventh still hidden away in storage. I can handle poor quality.

But I do miss that longing for something unobtainable, because it’s the gaps that get filled in that are the best part. A brief synopsis and a photo or two, and suddenly Prom Night is a searing slice of childhood trauma, and Kingdom of the Spiders is some kind of waking nightmare, and Plague of the Zombies is a fresh-crawling piece of glorious sickness.

Who needs the dull reality of boring movies, when there is so much to be imagined?

* * *
I still like to be scared, and thrilled, and moved by horror films. I still like staying up really, really late on a Friday night, turning off all the lights in the house and watching something really fucking scary.

Sometimes, I get so freaked out I can’t turn around, because there is something behind me in the shadows. I know there is. If I don’t look at it, I’ll be okay, and the safe and numbing fear makes me feel more alive than ever.

That’s why I love horror films.
Posted by Bob Temuka at 4:00 PM

I like this post. Some of my favorite horror movies have been ones where the terror is completely psychological. I watched "The Night Strangler" a few weeks ago and even though it was cheesy and on a TV movie budget, it was still creepy. I read Mojo by Kris Sedersten and it could easily be adapted into a movie where the horror is all in your head, not unlike some of the classics of yesteryear.