I try to get all cynical and jaded about going to a comic convention, but I just can’t do it.

I’ve been to less than half a dozen conventions ever, and my first was only a couple of years ago, so there is plenty of time for things to get sour. Armageddon in Auckland is the biggest geek convention, and it’s on this weekend. It’s the usual mix of weird inter-geek rivalries and a craven desire to cater to every part of the nerd spectrum, but I’m there for the comics.

I can cope with the bottlenecks and the smug heat and ducking those fucking imitation swords that dickheads put on their back, if it means I can get to all those good, cheap comics.

And this is what I ended up with: 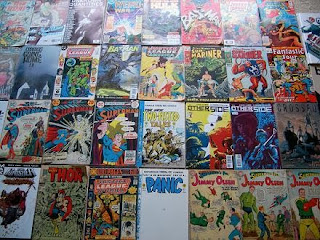 After taking that picture, I really wanted to roll around on top of this old, musty paper. Who wouldn't? Look at it! It's beautiful! But I thought the comics might fall apart.

* There is a shameless lack of non-Marvel and DC comics in there, (although I finally managed to get the first issue of Berlin) and it’s all my own fault. But it’s actually a lot, lot easier to get hold of copies of something by Dan Clowes in a dozen local bookshops, than it is to get $2 issues of Namor The Sub-Mariner at the convention. I can go into half a dozen stores and buy David Boring tomorrow, but I’d rather have some vintage Imperius Rex!

Make no mistake, this slow creep of wildly alternative comics into the most mainstream of bookstores is a great thing – it’s brilliant to see things like Tales Designed To Thrizzle in a Borders outlet.

But I go to these conventions with great eagerness to get something I can’t get elsewhere. I’m in love with old, beaten up comics from the fifties, sixties and seventies. While it’s not a very healthy relationship, it is fun. I don’t want pristine Marvel Pop Art Productions, I want comics that have been loved just a bit too much.

And Armageddon provides – Jimmy Olsen issues from before Kirby made the comic kool, 100-page issues of Adventure Comics, beaten-up issues of Two-Fisted Tales with brilliant John Severin art, all for a couple of bucks.

* I bought four issues of the Fantastic Four from the months when Kirby dumped the title for the price of a new issue of New Avengers. That’s just not right.

* The best $2 buy is a toss-up between Batman #194 from August 1967 with the terrific cover featuring Blockbuster beating the bejeezus out of a stone Batman logo, or the Justice League comic that was published in the same month JFK was shot and Doctor Who started.

* I’m not stuck completely in the ancient past. There were also some Ennis that I’d missed over the years, some early Justice League Europe, some NextWave, cheap Punisher and Iron Fist trades. Filling those holes, one day at a time.

* And there is always room for something new – picking up random series like a couple of issues of Wolfman/Colan’s slightly creepy Night Force or Aaron/Stewart’s The Other Side. Bits and pieces of here and there.

* I always like to get something by the local artists, so I got another Jared Lane comic, because his Phillip Bond-isms are not quite distracting enough. And I got some really nice mini-mini comics by the Sheehan brothers, which were sparse and disturbing.

* I also got the chance to pick up the reprint of Matt Wagner's earliest Grendel comics dirt cheap, which was a pleasent surprise, but not as surprising as finding Timothy Callahan's 'Grant Morrison: The Early Years' for two dollars. After glancing at it, the book is a bit too much into analysis and misses a lot of the emotional heart Morrison always stitches into his work, but I can't complain for two bucks.

* Speaking off Morrison: Got ya, you bastard!

* Outside of the comics, the nicest thing about going to a convention was getting to tell Lloyd Kaufman how much I loved Troma films when I was a teenager, or hearing the Seventh Doctor talk about getting a costume fitting for The Hobbit. That was nice.

* I’m totally going back tomorrow, and I’m getting more of those Jimmy Olsens.
Posted by Bob Temuka at 9:07 PM

Good haul, I really enjoyed seeing both McCoy and McGann speak, McGann was particularly funny - I do wish he'd played the Doctor a bit more.