Another day in Twin Peaks 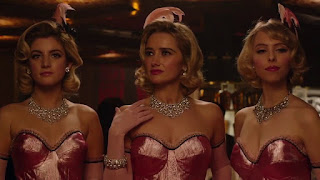 Yeah, okay, so the new Twin Peaks ended on a note of despair and loss unparalleled in modern fiction, but it wasn't all awful, and while the moments of lightness made that ending all the darker, they still shine individually.

Candie - a minor character who only has about a dozen lines in the whole 19 episodes and is played by the magnificent Amy Shiels - shines brighter than most. Sometimes she sounds like she's spouting nonsense, sometimes she's making a super sharp observation, sometimes she's off talking about air conditioning for five minutes, and sometimes she's hitting somebody in the face with a TV remote while trying to swat a fly (a statement on the medium from Lynch that is about as subtle as the smashing screen which started Fire Walk With Me).

It's not that she's dumb or stupid or anything, Candie is somebody who is on another level to everybody else in the story (except maybe Dougie Jones at his most blank). She's having a conversation that nobody else can really hear, and lighting up the screen while she's doing it.
Posted by Bob Temuka at 8:39 PM