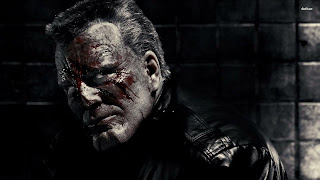 Whenever I can't sleep, and find myself unexpectedly wide awake in the small hours of the morning, I like to watch the Sin City movies.

It's nothing to do with the actual stories - the plots of the two films are so big and simple I can follow those with my dumb reptile brain and don't need to use any real thought, so that's not why I like watching them in the night.

It's the way they're made, and the way they're so gloriously hollow. Filming entirely on green screen, with no location work, gives the films the hyper-stylized atmosphere Robert Rodriguez was going for, but also makes everything feel artificial and unreal and incredibly calming.

And it's not just the visuals. Even with the unending voice-overs, constant droning music and the sound of some poor schmuck getting his face pounded into hamburger, there is this dead sound behind everything. No ambient noises of the night or the city, just the kind of nothing you hear in the dead hours.

I find it very relaxing. The movies are not much more than an experiment in style, and it's an experiment that doesn't always work, but there is nothing more I like to have on in the background as I try to get through another long, cold night.