The craziest feeding frenzy for a comic that I ever saw didn't involve the death of a beloved character, or a first issue, or a new project from a big artist, or anything like that. It was for a comic that came with the best free gift ever.

It's a shame that the idea of a free gift never really caught on with American comics, which often bump up the price for an insert poster or glossy cover, because they totally work as a marketing gimmick. I know this, because they always totally worked on me - whenever they stuck cheap free gifts to the cover of British comics, I was always, always, keen to give them a go.

I got the first issue of Scream! - the early eighties kids horror comic that still scares me today – because it came with plastic Dracula fangs, and I became briefly obsessed with School Fun – an extremely minor kids funny comic of the same era – after getting the first issue to play with the rubber creepy crawly thing on the cover.

It still happens today, with cheap and cheerful reprints of kids comics taping all sorts of rubbish to the front cover, and The Beano still comes with the odd freebie. And it still works on me today – Mojo and Uncut are the only music magazines I really bother getting these days, almost entirely due to the free CD they stick on the cover.

But the best free gift ever – by a country mile – was when they put a free Action Force figures with comics in late 1984, because it drove me and my mates crazy.. 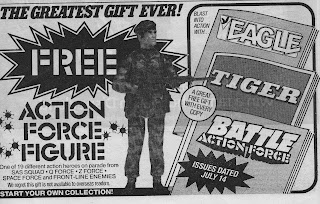 In 1984, I was nine-years-old, so my priorities in life were action figures, comic books and lollies, (in that order). But action figures were expensive in my part of the world – relegated to birthdays and such – so when they gave away an Action Force figure in a bag with copies of Eagle, Tiger and (obviously) Battle Action Force for fifty-five cents, it really was like Christmas.

And I wasn't the only one to think that. Every one of my mates – even those who had showed no interest in any kind of comic - wanted them. It was a frenzy, and every copy disappeared from my home town within 24 hours. And because we were all kids, that was it. Somebody might have found an odd issue in another nearby town or something, but they usually ended up with another bloody Z-Force figure. I heard a rumour that somebody in Christchurch got all the Q-Force figures, but that was probably just crazy talk.

A year earlier, we'd all been hip-deep in the great Return of the Jedi trading card swaps, (I still got a complete set of that), but in late 1984, it was all about those action figures.

I got two, and I was lucky to get them. 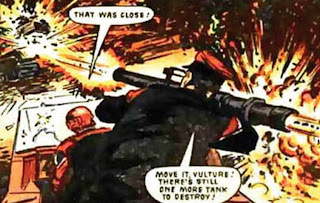 A brief history of Action Force: it's kinda like a British version of G I Joe, with it's own toy line and specific characters and villains, that ended up with the entire team transforming into G I Joe, with the lead Action Force villain Baron Ironblood putting on a new helmet and calling himself Cobra Commander. (Destro's Action Force name was Red Jackal, which is a little awesome.)

There were a couple of toy lines, and after a successful trial story, the concept and characters took over half of Battle, the weekly war comic, with the characters of Z-Force and Space Force appearing alongside long-running strips like Charley's War and Johnny Red.

Some of these comics, which were produced at the same time that sister publication 2000ad was going through a real golden period, were surprisingly strong. They were full of blood and guts, and thoroughly professional action art.

The whole thing died out towards the end of the eighties – Action Force stopped appearing in Battle, and was later replaced by the absolutely awful Storm Force idea. But I stil have a lot of affection for Action Force, and I'm certainly not the only one. 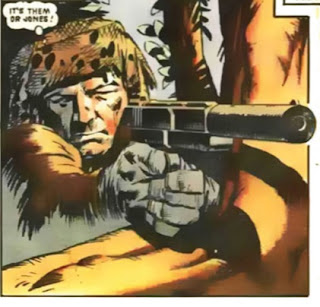 Man, us kids went crazy for those comics with the figures. It was the only time you'd ever catch me getting excited about the Tiger comic (whose lead strip was a story about a little wanker with magic football boots), and I remember a few people kept on getting Battle and Eagle after the free gift of those toys, hooked by the story. And the art, with the silky lines of Vanyo, or the grounded chunkiness of Ron Turner, or the grimy, slimy brilliance of Jim Watson, or the occasional Cam Kennedy brilliance.

I was, am, and always will be a 2000ad man, but I did get Battle Action Force for about a year after that free gift, digging on Charley's War in the Battle and loving the action in Action Force.

It was good, harmless fun, which occasionally got quite nasty, but it never really went far enough, and I stopped getting that comic long before Action Force actually faded away. 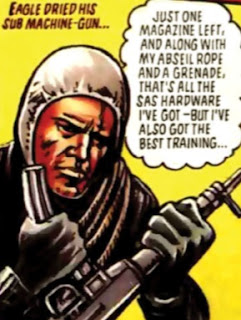 I got rid of all my Battle comics years ago (although I'm incredibly tempted by all the recent hardcover reprints of things like Johnny Red and Major Eazy). But I still got that SAS figure I got free with my comic.

He's been missing an arm since 1988 – because all old action figures eventually lose their arms - but he's still a tasty action figure. The comic with the free figure also came with a glossy poster showing off the rest of the range, and while there were some really neat looking figures, the SAS were easily the best.

It helped that the SAS were undoubtedly the coolest cats on the planet at that time. Everyone knew that, after seeing them in real-life action, putting down an embassy siege on live TV. After that, at least four of my mates solemnly swore that they would join the SAS when they grew up (none of them ever came close to the military). But those hard men in black masks who showed up on the telly were so bloody cool.

And the SAS figures cut a dashing figure in their black combat outfits. The figures didn't have all the detail and articulation you see on figures these days, but they looked pretty damn good standing on a shelf, gun in hand. 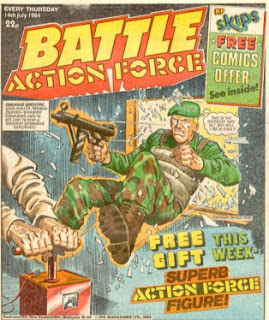 The funny thing about the promotional free gift is that was wasted on me and my mates, because you couldn't actually get those action figures in our part of the world. While Star Wars figures were still plentiful (but dying fast in 1984), the only Action Force figures anybody ever got were those free figures, which rendered it a bit pointless.

But while it was a failure as a kickstarter for the toy line, it didn't hurt the comic. When all else fails to entice the kids, give 'em something for free, and they'll love ya forever.
Posted by Bob Temuka at 9:13 PM

Curious; I read Battle Action Force for at least a year, I bought Action Force, I even think I remember the cover with the free figure on, but I don't remember getting a free figure. Could it be they were all sent to Kiwis? There as nothing notable about the comics apart from the reprints, though IIRC there was some early scripting by Grant Morrison in there. Probably jerked Battle out of its xenophobic rut though.

Wow that brings back memories. Im a bit older than you but i went on to collect most of the action force figures. I always wanted the roboskull but couldnt afford it. Great post mate. By the way i got a free Z force radio operator

You are not alone!! I collected a lot of the figures but in my childlike view of this offer I created the idea that I could get to complete my collection by simply tasking friends relatives from around the uk to buy a comic with a different figure!! Imagine my disappointment when they all turned out to have the z force Sapper on them. Happy memories

Found this blog totally by chance while trolling teh interwebs (LOL) for Battle Action Force info...wow! What a LOT of memories! AND....I still have the SAS Squad Leader figure you mention (down to the grappling hook, rope and Heckler & Koch MP5 ;-))

Unfortunately I was - and still am - in South Africa and we didn't get the free figures. They WERE briefly sold here in 1984 and I managed to get a Red Shadow, Baron Ironblood, The Black Major, the Q-Force Diver, Z-Force Captain, Z Force Infantryman and SAS Squad Leader....unfortunately none of the bigger stuff (like the Z Force Tank) made it out here nor did any of the "new" Action Force and Cobra stuff when that was released in 1985

I started reading Battle in May 1983 when "Invasion 1984" (about an apocalyptic alien invasion of Earth and 13 years before Independence Day!) started. Battle had the four-part Action Force intro story the next month and AF became an integral part of Battle in November and that lasted for another three years, until Storm Force took over in early 1987...I kept reading it purely for Charley's War and Johnny Red but by the time I'd finished school in 1989 and started university in 1990, it was on life support and I stopped buying it....I have no idea when it ceased publication but I wouldn't be surprised if it lasted another 1-2 years at most :-(

I still have most of my Battle AF comics and am missing about three (which I cannot find ANYWHERE) (plus - like an idiot - I cut the back covers off the issues that had posters and games - idiot! LOL)