Fear of a camp Bat


Old issues of Amazing Heroes from the eighties remain fascinating items, because of all the trivia they come loaded with. I really do enjoy finding out about forgotten feuds and controversies, or reading about coming comics that never materialised, or even just finding out about something that had stayed under my radar for decades.

They are also an invaluable insight into fanboy mentality. With the internet, that sort of thing is all out in the open now – it's not hard to find out what your average geek thinks of your comic book controversy. Sometimes, there is a comic so bad that everybody knows about it, and occasionally you get a comic that has almost universal love, and it's not hard to find out about them either (even the dissenting opinions just reinforce the consensus).

I got a small pile of Amazing Heroes from the very late eighties recently, and while it's almost interesting to read about things like The Maze Agency and Airboy, it's the collective mentality that is most fascinating, as everybody gets in behind Jack Kirby in his fight against Marvel, and everybody knows that Watchmen is opening the door to a new age of sophisticated suspense in superhero sagas, and everybody knows this is the dawning of a new age of super-serious comic books.

And everybody knows that the sixties Batman TV show was the worst thing that ever happened to comics, and Tim Burton better not let any of that camp nonsense infect his new movie. Like a lot of people, I loved the Batman show as a kid, loathed it as an adolescent, andlike it again as an adult. If you like your Batman to come with a huge dose of grim 'n' gritty, chances are you still think it's a terrible thing that is best forgotten.

But the consensus has changed over the past couple of decades, and there is a lot more fondness shown for the sixties television version in the 21st century. All the deadpan seriousness, bulging tights and bright, colourful sound effects still hold up, thanks to that knowing wink.

And after years of quietly denying it ever really happened, (apart from one brilliant bit of nonsense from Ellis and Cassady in the Batman/Planetary comic), DC is now putting out a comic set in that pop-soaked world, gleefully tapping into this newfound fondness. It's still plainly a show for kids, but there is no shame in admitting you like it as an adult. 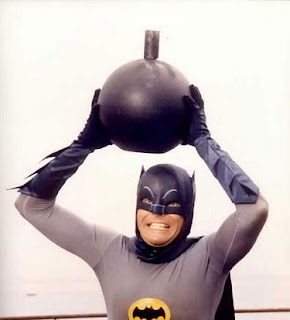 It wasn't always like this. And in the months leading up to the 1989 Batman film, there was a blatant terror in fandom that the Burton film was going to be silly.

Even though the Adam West Batman had been off the air for two decades by that point, it was still the most popular pop culture item to be associated with comics. The use of its cheesy sound effects in newspaper article headlines swiftly became a cliché, but that's because it was what the general public thought all comics were like.

Even after all the truly mature works that had come out in the seventies and eighties, comics were still primarily seen as a juvenile medium, and the Batman show was often held up as the ultimate example of this. Which drove many comic fans – who were desperate for legitimacy – absolutely bugfuck mental.

They cursed any media attention that still banged on about the show, and were unable to convince anybody that Batman stories could be serious and grown-up. Reading those old Amazing Heroes, and there is some ferocious condemnation of the television show. Batman fans who wanted a Dark Knight instead of a Caped Crusader tore into the series.

In one issue alone, the television show is described as 'irritating', 'childish', 'ridiculous', 'foolish', 'harmful' and 'shameful'. Even the one writer who admits that he liked the story has to do it in the form of an apology.

This idea, that Tim Burton – who made a Pee-Wee Herman film – could be influenced or infected by this silliness when he made his film, was terrifying. 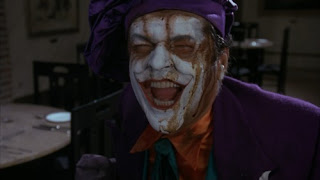 And it's easy to forget what a big deal the Batman movie was in 1989. It was the first major comic book movie in years, and was propelled by an astonishing media blitz that guaranteed success. Whatever anybody thought about superhero comics, it was going to influence the public perception for the next decade.

So when it turned up all shrouded in deep shadows and hellish fog, there was a palpable sense of relief. It was still pretty goofy – Nicholson's Joker is all over the show – but it was also treated fairly seriously. There was no winking here.

I was 14 when it came out, and I certainly felt that relief, because when you're 14, you deeply, deeply care what other people think of you, and you're convinced everybody is judging you by your tastes in movies and books, and I was convinced that a silly Batman movie would be too embarrassing for words.

I loved that first Batman film – it was one of the first films I saw multiple times in a theatre – because it was big and epic and dark. The bit where the newsreader laughs herself to death after being poisoned by her hairspray was directly responsible for onr of the worst nightmares I ever had in my life, but I don't hold that against it. Any kind of film that can get that kind of reaction from my subconscious works for me. 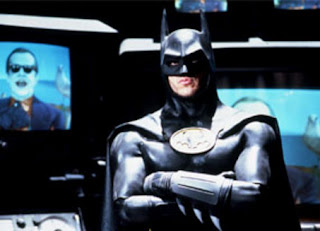 Twenty-four years on, and that Batman film hasn't aged that well. With Burton's insistence on huge sets over real locations, the film feels claustrophobic and stifling. And the storytelling is clumsy, filled with awkward exposition and half-thought-out scenes that don't really go anywhere.

Ironically, it's the campy shit that stands up better now, Nicholson's hollering is strangely timeless, the absurdity of the story is part of the charm and the gaudy spectacle is still striking. The later Batman films played up on this more and more, and were inexorably pulled in by the cultural gravity of the sixties show, getting campier and campier, and dumber and dumber, until the nadir of Batman and Robin. (Which now has some brave souls who are willing to stand up for it.)

The Nolan films went back for the real-world darkness, but it's notable that some of the most successful parts of the series – things like the Joker's unearthly cackle, or Bane's voice of high villainy – are also the most absurd. Crucially, Nolan knew that the more serious you take these things, the sillier they're going to get, and it's no use ignoring it. 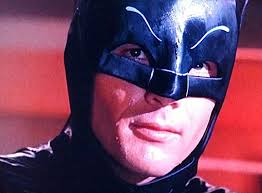 But it's 2013 now, and there have been a lot more superhero films under the bridge since then, and few of them have that cultural weight that the first Batman had. There has been enough variety for the general pubic to realise that superheroes don't all have to be one style – they can be as silly or as serious as they want – there is room for both camps.

And this is the quiet, knowing triumph of Adam West's Batman. There is nothing wrong with a deadly serious Batman, who lives on pain and vengeance, but there is also room in that vast utility belt for some Bat shark-repellent.
Posted by Bob Temuka at 8:02 PM