I firmly believe there is a comic for everybody – the hard part is matching the right comic to the right person.

The new comic reader is a prized goal for many companies. Even though the comic industry is not at its healthiest right now (and hasn’t been for quite a while), there must be new readers replacing those who drift away or pass on. Grabbing the attention  - and more importantly, dollars - of a new reader is a major goal for every publisher.

Jumping-on points, Point One issues and complete reboots all have the aim of attracting new sales, and while most of the increased sales come from the same people who have been buying the same kind of comics for years, it’s the brand new comic reader that’s the real prize, bringing one more customer into that pool.

And who can blame them? The number of regular readers of English-language comic books would be lucky to top a million – there are literally billions of potential readers out there to snare.

Comic book movies are, for all their faults, responsible for many people trying a comic for the first time. While it’s also arguable that something like the horribly clumsy Green Lantern movie put off as many potential readers as it attracted, other films have certainly inspired new readers. (The only time my lovely wife has ever got into a comic was after all those disappointing adaptions of Alan Moore stories.) And there is plenty of choice 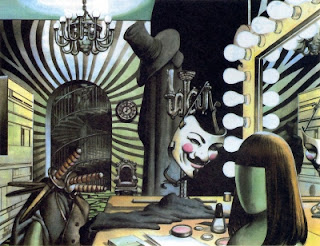 There are so many different kinds of comics, and while the racks are choked with superhero stuff, there are still all sorts of genres, and styles, and everything

I’ve done my bit for Team Comics over the years, trying desperately to get people into things, giving comics to my very best mates and people I hardly knew. There were only two real successes: I sent somebody in New York a copy of Death of Speedy, and gave somebody else hundreds of 2000ad issues after I somehow ended up with double issues. Both follow Love and Rockets and 2000ad to this day.

But I’ve backed off in recent years after realising that not everybody can be into the same things I’m in to, and that that’s okay. (It only took me 30 years to figure that one out.) I’m always ready to make suggestions if anybody asks, or rave about some new thing with somebody I know, but only if I’m sure they dig the exact same things.

The thing is, you can never be entirely certain of what is going to click with somebody, and it can sometimes be something totally unexpected. You can never really tell when somebody who has never shown the slightest interest in comics will pick something up and ask for more. 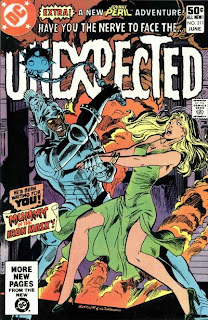 Neither of my parents were huge readers when I was growing up, although Dad had a voracious appetite for chunky pulp nonsense, and has always had a Wilbur Smith or Stephen King sitting by his ashtray. I was always the crazy reader in my house, slightly bemusing everyone else with the fondness I showed for silly old books.

In particular, my mum was never one for reading, happy enough with womens’ magazines and the odd romance novel. She never really disapproved of my obsession with comics, but she never really understood it. But the things she always liked, which kinda surprised me, were DC horror comics from the 1970s and 1980s.

She read every single one I owned, and was always pleased to read a new one. She really liked all those short, sharp shocks from comics such as Unexpected and Ghosts and the House of Mystery.

While she didn’t care about the format, and was just as happy with a coverless black and white thing that I got for ten cents as she was with a pristine new issue, she knew what kind of stories she wanted, and knew which were the good ones.

She wouldn’t be able to tell Rob Liefeld from Jack Kirby (and, in fact, would have no idea who those men are), but she could tell the difference between the DC efforts and horror comics by Charlton, or the weird European horror things that local publishers could pick up for a song. They weren’t as good.

My mum never showed any other interest in any other comic I ever read, except for those horror comics. Who would have known? 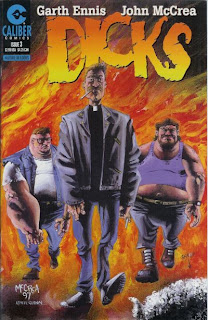 A good mate of mine, who we will call Mr Trump (largely because that’s his name), was never into comic books. When we were growing up, he was more into wrestling miniature – and later on, his obsession became dirty old rock and roll – and he never had time for comics, at all.

But one day, when we were flatting together in the late nineties, he picked up a random comic I had left lying about, and thought it was the funniest fucking thing he had ever read in his life. It was an issue of Garth Ennis and John McCrea’s Dicks.

Dicks is the textbook definition of a comic that is NOT FOR EVERYBODY. It’s intentionally crude and offensive to an often horrific degree. The terrible misadventures of Dougie and Ivor don’t trample over all of society’s worst taboos, they stamp on them with a steel-capped boot, rub them into the ground and take a massive shite on them.

And it’s this kind of gleeful abandonment of anything subtle or acceptable – combined with the genuine (and slightly mental) sweetness of the main characters – that appealed to Mr Trump. I can still remember the day he nearly pissed himself with laughter over the bit where a dog gets shot in the head.

Any time I have caught up with Mr Trump in recent years, he has asked me if there has been any more new Dicks, and it’s always disappointing to say there isn’t. I’m pleased beyond words that the next time I see him, I can tell him there is actually new stuff coming out.

Mr Trump never showed any other interest in any other comic I ever read, except for Dicks. Who would have known? 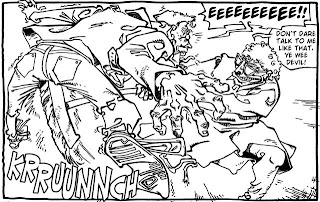 You can never really predict what people are really going to be hooked by – all you can do is offer a wide a range of new and different options, and let people find them for themselves. Quality work always finds an audience, even if it’s not the audience you’d usually expect.

Something new, something different, something pretty. Something that will catch the eye of somebody who has never bothered with a comic before. Something for everybody.

Who would have known?
Posted by Bob Temuka at 10:15 AM