A Soundtrack of Ice and Fire

Sometimes I enjoy a movie or comic or TV show so much, there are literally no words to describe how it makes me feel. So it’s incredibly difficult to explain how hard I fell for Game of Thrones over the past year.

Like many, many other people, I only came on board George R R Martin’s Song of Ice and Fire with the television show, and like many, many people, I fell into that world with absolute delight. Twelve months ago, all I could tell anybody about the series was that it was some sort of fantasy involving a very long winter, and that lots of trustworthy people had told me it was worth following.

I got hooked on the show at the precise moment the fight between the Hound and the Mountain on the jousting field ended, and after that, there was no going back. I devoured the books, and got deeply immersed in all the online analysis and theories. I now spend a lot of time wondering about Targaryen bloodlines and the religious beliefs of the Iron Islands.

Fortunately, I know several other people who have also fallen for the whole series as much as I have in the past year; unfortunately it means we only really talk about things like Jon Snow's mum when we meet up now, and not much else.

I'm not complaining. Spending time talking about something so vast and thoughtful and powerful is time well spent. 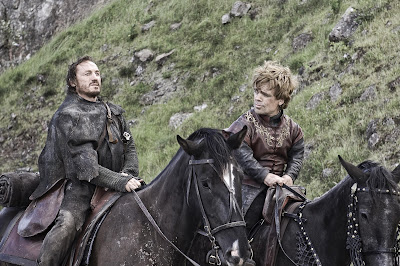 I’ve been a fiend for good fantasy since I got a bit over-excited reading The Hobbit as an seven-year-old, but got burned out on terrible Tolkien imitators and endless bloody role playing game tie-ins in my teens, and hadn't read any kind of long fantasy epic in years before A Game Of Thrones.

I have a fairly obsessive personality, so I drank it all up, burning through all five books in four months, watching the TV series several times over and taking to the internet to fill in all those gaps I missed. I watched all seven commentaries and every special feature on the DVD box set in three days.

I know I could talk for hours about how the one time you see Khal Drogo fight in the TV series is all you need to understand the character, and I know that Sean T Collins is right and there is a weird satisfaction when somebody you recommended the books to gets to the Red Wedding, and I know that like Lord Snow, I know nothing at all. 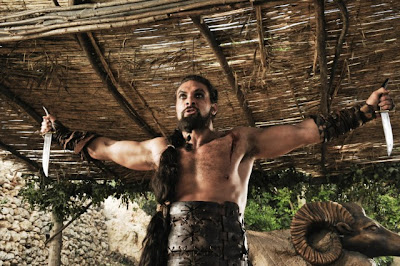 The thing I like most about it – and I like a whole lot of it – is the sheer fucking size of the thing.. I’ve read loads of essays, listened to podcasts, and they haven’t even covered a fraction of the themes of the overall story. It’s just too big to talk about.

I know someone who finds the whole Rickon thing actually upsetting – he is really moved by the small story of a little boy who has been abandoned by his parents (for the noblest of reasons), and his hurt and confusion literally manifesting itself as a giant wild wolf. It’s just one tiny part of a vastly bigger story, but even this small sliver of story has emotional resonance, and there are plenty more throughout the five books in the series.

You could – and people certainly have – write long, long essays about Jaime Lannister’s weird purity, or the absolutely clarity of the relationship between Tyrion and Bronn, or the role of the Maesters in the running of the realm.

You could pontificate at length about the dialects, geography and vast history of this world. You could argue over whether the Hound is the one truly honourable character in the series, or whether he can not be forgiven for some of his monstrous deeds.

But there are still some things that anybody who watched the television series can agree on – that Peter Dinklage is outstandingly good as Tyrion, that the opening credits are a work of sheer brilliance, that the fight choreography is frequently breath-taking and that Ramin Djawadi’s score for the series is fucking amazing. 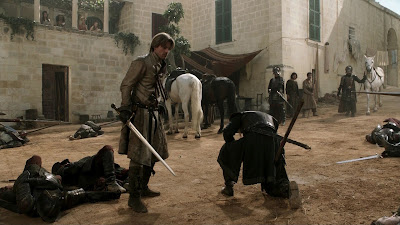 I know it sounds like the geekiest thing ever, but the one album I’ve listened to the most in the past year is the Game of Thrones soundtrack.

All those pounding war drums, mournful strings, soaring choruses and haunting pipes. There are parts that are almost painfully moving, and other bits where it sounds like the musicians are gleefully taking to a double bass with a circular saw.

One of the astonishing pieces of trivia revealed in the DVD commentaries is the fact that the Iranian-German composer was a very late addition to the mix, because Djawadi’s score is such a massive part of the television show’s success.

It’s impossible to imagine the series without his stunning work. It is also a beautifully self-aware soundtrack that manages to compliment and enhance the story it is attached to, while also acknowledging the greater themes of the tale.

There are two moments in the soundtrack in particular, where the music suddenly becomes part of the story in an interesting way, and I’m still floored by the successful audacity of these pieces of music. One of them is right at the start of the story, and one is at the very end. 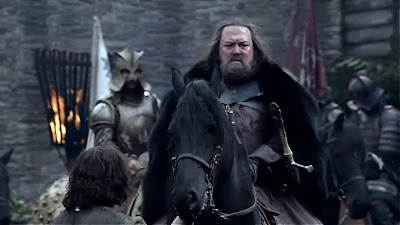 The first is The King’s Arrival, the fifth track on the soundtrack album and the music that can be heard in the first episode when the King and his incredible entourage roll into Winterfell. (You can hear it here)

The version on the show is a marvellous piece of work – perfectly capturing the grand entrance of the King with a catchy-as-hell theme – but the version on the album is even better. The most impressive thing about it is that it starts off as a jingly little toe-tapping tune that you would expect to hear from a small group of minstrels, and the sparse production is what you would expect from the soundtrack to a television show (with a limited budget) set in a fantasy world.

And then, after a brief pause at the one minute mark, the same tune starts up again, but this time the bells and tambourines have been replaced by big fucking pounding drums, deep strings and a full horn section. It’s an incredibly epic moment, and it feels like the soundtrack has paused and thought ‘Hang on, this is King Robert Baratheon, who seized the Iron Throne by slaying Rhaegar Targaryen with his own hands at the battle of the Trident. He deserves more than bells and whistles – he deserves his goddamn orchestra!” And he gets it. 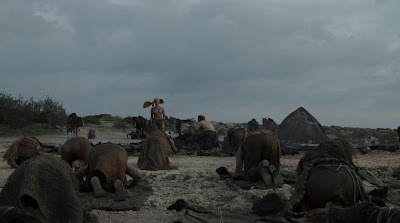 The second piece come right at the very end of the first season of the show, playing over the final scene and closing credits.

It’s the moment when the story becomes much bigger, stranger and more rewarding than it first appeared, with the introduction of real magic into the story, and a monumental shift in world-defining power.  The soundtrack responds to this scene with a new theme - a soaring choral chant that hints at things darker and more substantial, and the sense that everything before was prelude and the real story has only just begun, and is destined for something bigger, something powerful.

But the main theme of the series is in there again, showing that the original story still has a part to play in this new and larger narrative. There are dragons in the world, but the Stark children are still scattered and lost, and they’re all part of this fresh and measureless new tapestry.

And then the music, the soundtrack and the story abruptly slams to a stop. The tale goes on, but not yet.

You have to wait and digest. 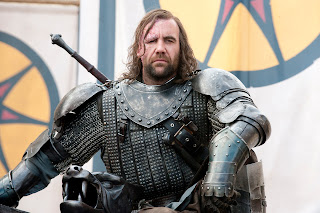 Game of Thrones is a sprawling mess in the best possible way - a story that starts in a Northern castle spreads across continents and over years, through the thoughts of the main characters, through devastatingly painful wars, and through the rise of magic, the quests for freedom and the aching to find a place in this huge world.

It’s too much geography to navigate in one sitting, but there are pieces of the Game Of Thrones landscape that we can sit back and enjoy, and Djawadi’s music is one of them.

It’s immensely rewarding, and the short running time of every track leaves the listener begging for more.

Just like any good story.
Posted by Bob Temuka at 2:42 PM

Hey man I feel like reading the first half of this I was reading about myself. I also watched the show first, devoured the books and fallen very hard into them. I'm currently rereading A Storm of Swords and have already reread A Clash with Kings. So much awesomeness. Keep up the good work!

Thanks for putting into words the depth of this crazy ASoIaF fandom!

Mine was Sansa and Joffrey on the bridge, with Sansa asking "how long must I look, my grace?".

So much was going on with that scene that my channel surfing came to an immediate stop and that was when my Game of Thrones obsession began. Everything you wrote about your subsequent fall into this madness is exactly the same, we could be twins. But not incestuous ones, i hope ;).

When I finished A Dance with Dragons in November, I immediately started reading the books over again.


Sadly, I have not even heard the music on the episodes!! But you're not the first person to mention the general badassery of it, so it will be my focus on the 2nd viewing of each episode weekly!

It's nice to "meet" another GoTFanatic. I only have 1 person IRL to be this ridiculous with.