Marvel’s vampires are the best vampires in all comics, despite the company’s best efforts to make them as unlikeable as possible.

Vampires are everywhere these days, and a deluge of piss-poor movies and Young Adult novelettes in the past decade has almost totally robbed them of any cool factor. It’s a sub-genre that still occasionally produced something marvellous, like Let The Right One In, but they are usually smothered in endless and unwanted Underworld and Lost Boys sequels, or well-intentioned failures like Rosencrantz & Guildenstern Are Undead. The writing was literally on the wall once Vampire Fiction bookshelf signs went up in Borders.

I’ve always been a sucker for vampire stories, ever since I sneaked out of bed to catch a showing of Dracula: Prince of Darkness as a little kid. I’ll see any old piece of crap that has vampires in it, which means I have seen a lot of old pieces of crap. I don’t care, I’ll keep watching them. I can’t stop now. 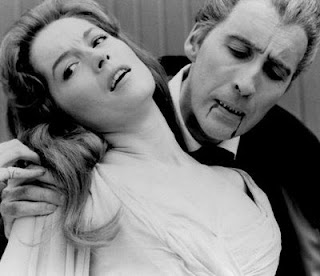 And it’s not just the occasional shitty movie or a late night guilty pleasure like the Vampire Diaries, I’m always up for some vampire comics, but disappointment is almost inevitable. Maybe it’s because the appeal of vampires is so often inexorably linked to physical sensuality, and comics have a weird idea about what’s sexy (all those arched backs do nothing for me), and besides, I stopped wanking over cartoon characters and moved on to real girls when I was 15.

There is the occasionally good (but never great) Vampirella comics, but that whole concept has always been a bit skeevy, Buffy the Vampire Slayer comics get tedious – in any incarnation - surprisingly quickly, even with Whedon’s involvement. There are all sorts of other comics still being published, including things like Covert Vampire Operations, or Dracula: The Company of Monsters, but almost always fail to thrill.

There has also been a long history of vampires in the DC universe – dating back to Batman’s very earliest days – and DC creators occasionally produce something good (the vampires in the water in Alan Moore’s Swamp Thing run are still some of the creepiest nosferatu ever seen in comics.) But the DC vampires are also incredibly disorganised – there are all sorts of different rules for different comics, and all sorts of different vast vampiric conspiracies happening in different comics, often at the same time. 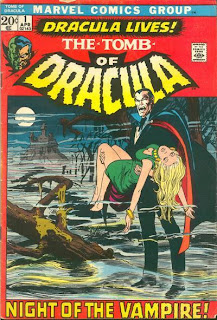 According to one of those handy Marvel Handbook things, Dracula’s first appearance in the Marvel Universe was actually in something called Suspense #7 in 1951, but the history of the Marvel vampire really starts with Tomb of Dracula #1 in April 1972.

To be fair, most of that mythology was only established in that first decade after Tomb of Dracula #1, and the next 30 years saw an almost conscious effort to undermine it, but those old comics are still surprisingly powerful. Even if the paper they were printed on is beginning to show its age, these vampire stories are (almost) immortal. 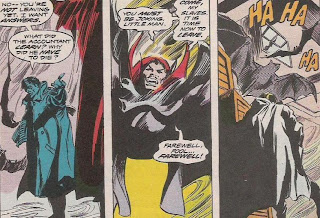 It all starts with that Tomb of Dracula series, and the long, strange road that Marv Wolfman and Gene Colan took with that monthly colour comic.

I get the feeling that if you got Marv Wolfman drunk in front of a tape recorder, he’d tearfully admit Tomb of Dracula was an unashamedly sincere love story, and he’d be largely right. Wolman and Colan gave Dracula a regal disdain for all of humanity, and while he might be a bloodsucking monster, he was also a man with his own passions and a lust for life that death could not conquer.

It was a comic that could get ridiculously goofy, but it also managed to be genuinely creepy and occasionally affecting. It tried to tackle Big Themes, and sometimes did them justice, as Dracula strode through the late twentieth century like a metaphysical colossus. No matter what else changed in the world, Dracula was eternal.

My deep affection for Marvel vampire comics – and the establishment of a real vampire canon - also stems from the black and white magazines that ran concurrently with the Tomb title.

Of the other major comic companies, Marvel made the most out of the mini-boom in cheap, chunky black and white comics for adults in the 1970s. While smaller publishes would slap any old crap together and find buyers, Marvel’s black and white magazines were given some real editorial care – producing Conan comics that would outlive all of their contemporaries, pulse-pounding Kung-Fu magazines, the only decent Planet of the Apes comics ever (an admittedly low bar to overcome), and – most of all - all those intensely creepy black and white horror magazines

There were loads of them, featuring the truly freaky Simon Garth zombie or the misunderstood Frankenstein monster or the lovely Satana, but the vampire comics were the best.

Tomb of Dracula continued for a few more months after the end of the colour series in magazine form, but there was also Dracula Lives and Vampire Tales.  None of the comics lasted more than a few years, but they were all loaded up with great stories, with terrific art from Colan, the terribly underrated Tony DeZuniga, Mike Ploog, John Buscema, Neal Adams and dozens of others.

The stories – written by the usual suspects: Wolfman, Isabella, Gerber, Conway and Moench – were mainly short, one-off tales that could be extremely effective, (one about Blade taking on a nest of child vampires profoundly scared the shit out of me as an eight-year-old), but they also delved into the background and history of Dracula and Marvel vampires in general, setting a template that was too strong to be ignored. 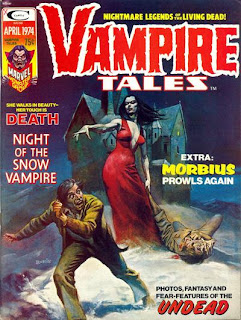 But all that was 30+ years ago. A lot has changed since then, and desperate attempts to pump blood into the Marvel vampire have proven increasingly anemic.

Oddly enough, they were at their one of their most interesting when they were all gone. For a while there, around the end of the eighties, vampires didn’t exist in the Marvel Universe – something called the Montesi Formula wiped them from reality in some random issue of Doctor Strange.

It was a blatant editorial attempt to get away from all the clichés that were building up around Dracula and his brood, but the fact that they only existed in whisper and myth gave them a weird sort of spooky power. They were a Great Evil that had plagued humanity since caveman days, and the world was better off without vampires, but they still left their mark all over the place.

It only took a few years before they did a Montesi reversal, and vampires were everywhere again. Unfortunately, by then it was the darkest days of nineties comics, and endlessly awful issues of Nightstalkers and Midnight Sons soured the concept, making Marvel vampires terminally uncool. 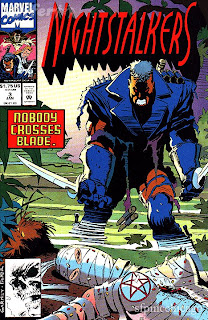 But Marvel are not the sort of company who just leave a half-decent concept mouldering in its grave, and has repeatedly tried to resurrect their vampires, with diminishing results.

The most recent was seen in the launch of the thoroughly redundant X-Men comic, which started with a six-issue war between mutants and vampires. The most surprising thing about these tedious Curse of the Mutants comics was that even after everything Marvel had done to its vampires over the years, it could still make them more uncool.

It only took one issue – the Death of Dracula one-shot which kicked off the story – to show this new generation of vampire stories just weren’t worth following. It wasn’t the clichéd vampire prostitute clans or even the endless bloody politics and grasps for power the story was interested in, but nobody else was (something that has also crippled the Marvel ninja – nobody wanted endless issues of Daredevil full of ninja politics).

It was largely the fact that the story included the dreaded Farmer Vampires, showing up for a grand summit in their best jeans and overalls. (And yes, there were always vampires harvesting humans like farm animals, but at least they didn’t pretend to be some mighty clan. And yes, there was always Hellcow, but nobody ever tried to convince anybody that they should take Hellcow seriously.)

But the one thing that convinced me that the new direction for Marvel vampires was like dust in the mouth was the new design for Dracula. Instead of this classically creepy look, which has somehow remained in some kind of fashion for more than a century - 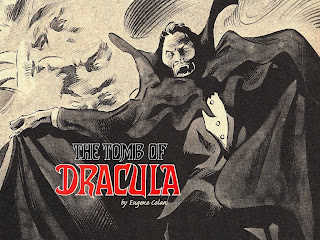 - there was this design, which looked dated three minutes after the comic was published. 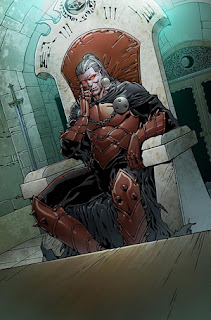 Gene Colan’s Dracula had a magnificent malevolence in his 19th century suit, striding through the ominous mist in his great cloak and tie. It was a criminally undervalued look, saying everything about the character. This was a supernatural suit, which turned into mist with the vampire’s body, and gave Dracula that vague bat shape that hinted of the lustful animal beneath the pressed shirt.

The new look is a hamfisted attempt to look modern and interesting, but a ponytail on a man is never cool, and all that scraggy red armour just makes him look like a cosplayer at your local con.

Even after that, I still have unbridled affection for Marvel vampire comics, but that’s not nearly enough to keep me following their latest incarnation. There is no creepiness or dread or anything like that in the latest wave of vampire stories, but at least I’ve still got the old magazines to remind me that they once had power.
Posted by Bob Temuka at 4:05 PM

Are you tired of being human, having talented brain turning to a vampire in a good posture in ten minutes, Do you want to have power and influence over others, To be charming and desirable, To have wealth, health, without delaying in a good human posture and becoming an immortal? If yes, these your chance. It's a world of vampire where life get easier,We have made so many persons vampires and have turned them rich, You will assured long life and prosperity, You shall be made to be very sensitive to mental alertness, Stronger and also very fast, You will not be restricted to walking at night only even at the very middle of broad day light you will be made to walk, This is an opportunity to have the human vampire virus to perform in a good posture. If you are interested contact us on Vampirelord7878@gmail.com